Just a day after a family in Donholm, Nairobi is called on the police to arrest a house help who they had employed accusing her of stabbing their two children, detectives from the Directorate of Criminal Investigations (DCI) on Saturday announced they had finally pounced on the suspect.

The young lady who had engaged the sleuths in cat and mouse games for hours was apprehended in Eldoret town where she had booked a Busia-bound bus in an attempt to escape to neighbouring Uganda where she is said to have relatives.

According to a briefing by the DCI, she was also found in possession of two Kenyan identification cards. 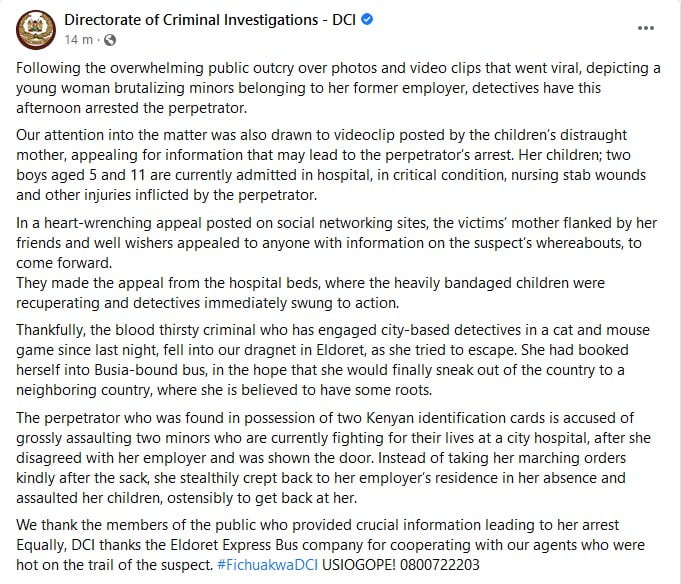 This past week, videos shared on social media showed the two boys in hospital receiving treatment.

Both had been bandaged following the wounds they had suffered at the hands of the house help yet to be officially identified.

Neighbours who had helped take the children to the hospital asked police to intervene and expedite the search for the arrest of the alleged suspect.

Sources privy to the matter state that the woman had been fired a couple of months ago for several misconducts after her boss noticed her bad behaviour.

However, not knowing that she would later revenge, the suspect is reported to have come back to the house while her bosses were away and stabbed their two children before fleeing from the crime scene.

Further reports about the matter indicate that the suspect was spotted through the CCTV cameras as she was fleeing from the crime scene.