The Union of Veterinary Practitioners Kenya want to be included in the process of transferring Kenya Meat Commission from the Agriculture Ministry to the Defence ministry.

The Union’s Secretary General Miheso Mulembani has threatened to move to court if the intention of the operational framework is not declared.

On Monday, Agriculture CS Peter Munya directed the Livestock PS to ensure coordination on the transfer of ministerial responsibility of the KMC to the Ministry of Defence.

The CS argued that KMC was not adding value to farmers given that the state owned meat processor has been facing cash traps for along time. 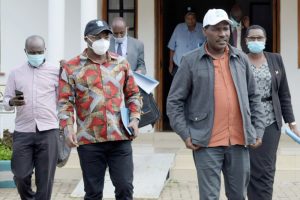 Munya also claimed that KMC has been performing poorly in the market with the defence ministry being the biggest customer and the transfer is aimed at optimizing it’s operations.

Mulembani, however, raised concerns if the militarisation of the institution is going to answer to the operational challenges witnessed in the facility.

“Has the government made public the people who looted KMC to death? Owing to lack of Public Audit on Military Expenditure, is the take-over meant to benefit some cartels?” he asked.

Mulembani also added that the technical traceability frameworks for livestock diseases will be severely affected owing to reporting challenges to the World Animal Health Organisation.

The union specified that the KMC Act 2012 Section 3 (1 a-g) clearly stipulates the membership of the KMC board.