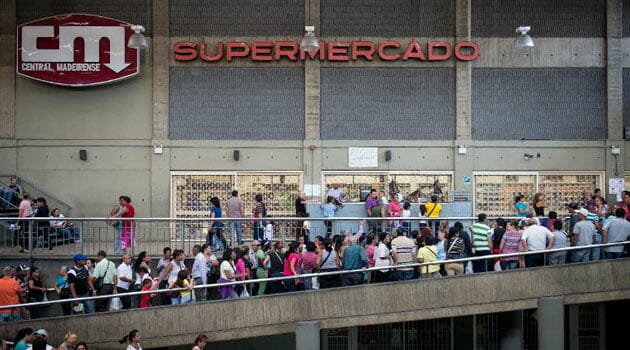 “This country never was like this. Before, we had the freedom to buy, invest, to grow,” said a man who only gave his first name Hernando, perched on a lawn chair to soften the hours-long wait expected outside a Caracas market.

Venezuela sits atop the world’s largest oil reserves, and is an OPEC member state. But Caracas’s long dependence on oil to fund its budget — and long delay in diversification — has been rocked by sliding oil prices.

And while some analysts say a deregulated economy could help pick up slack as the state reassesses its priorities, Maduro’s government has kept controls on the exchange rate since 2003.

The government claims businesses have caused shortages, saying they are trying to “wage economic war” against him and hurt his popularity, now at under 20 percent.

Many businesses, however, charge that his government’s economic controls have hurt them.

The inflation rate last year soared to a jaw-dropping 68.5 percent. And shortages have become so commonplace that some wealthier people pay others to wait in line for them.

Queueing for things as basic as diapers, coffee, soap or shampoo — with tense, cranky and occasionally violent fellow shoppers — has become daily fare in the country under 52-year-old Maduro — political heir to longtime president Hugo Chavez.

“These days, we eat what the government decides to put on the shelves,” a testy Hernando said.

One of the signs of the distress, he said: a black market salesman offered to sell him a pack of 32 diapers for 950 bolivars — more than six times the regulated price of 150.

At the crack of dawn, Lorena — who also declined to give her family name — headed to queue outside Farmatodo, a private chain the president has accused of trying to “aggravate the people.”

There was not much on the shelves, but an employee confirmed a truck was expected.

An hour later, the truck rolled up with a pair of National Guard troops who unpacked three boxes of soap bars, two of shampoo, and one very clear instruction: each person may buy up to two of each item.

Not more. That is because the government is wary of the black market.

“Two bars of soap and two shampoos. We hit the jackpot,” Lorena murmured under her breath clearly frustrated with the not-so new normal.

At 35, she is a preschool teacher who like most Venezuelans would rather not spend the day in line in the sun.

In the crush of limited commerce, the shampoo disappeared in under a minute.

Then, with suspense building, and the crowd restless and the soap box still unopened, two SEBIN government intelligence agents stepped in.

They asked the pharmacy to return the soap box.

“This is an outrage!” one emotional shopper shouted. “We get two bars of soap — or we don’t even get them. And you people keep it all!”

And Maduro’s government bars news photographers from taking pictures of lines, or of empty shelves.

Another woman in line at the pharmacy said she has spent three months trying to find an inhaler for her asthma.

She now hopes to travel to neighboring Colombia to buy one — and enough supplies for a full year.

Protests over the shortages in recent weeks have been much smaller than last year after the defense minister in late January authorized the use of deadly force to maintain public order.