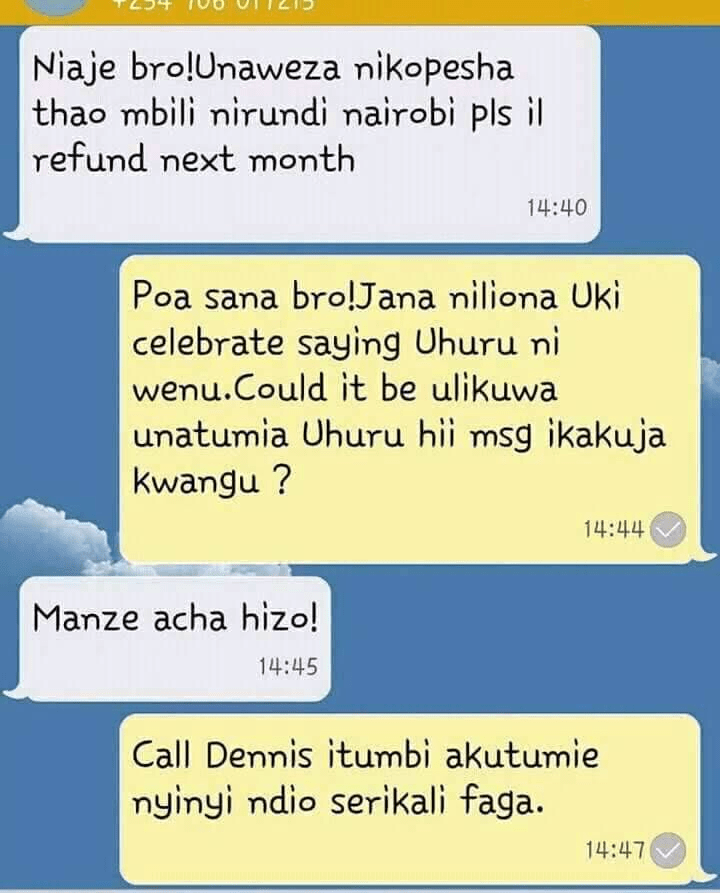 CAPTION: Kikuyu’s are back to doing what they know best; begging. Atleast have some dignity and pride like Kalenjins who know how to live within their means.

Members of the Kikuyu Community are being singled out for their habitual brokenness, even after gloating to the public of how their “muthamaki” floored Raila in the just concluded stolen elections. Inane sycophancy comes with a certain degree of misconception, that the Kenyatta family wealth is somehow a social fund meant to cater for the Kikuyu community.

A text message circulating widely on social media, shows a Jubilee supporter soliciting for a soft-loan to aid in travel expenses, perhaps after using up all his reserves to celebrate the stolen victory of Uhuru Kenyatta in the August 8th elections.

Even before the Supreme Court-Case where it is alleged that Supreme Court Judges have already received over Kshs. 1 billion per Judge, members of the Kikuyu community are begging to meet basic needs like rent, transport and even medical bills.

Instead of petitioning their glorified “muthamaki” for free healthcare which will benefit their tribe, Kikuyu’s are left to organise fundraisers so as to send their keen for advanced treatment in India. Kikuyu’s have become a burden to the rest of the country, due to their shameless begging habits.

Muthamaki in the meantime was today pretending to portray a sense of normalcy by eating meat at Kenyatta m
Market, while wearing a bullet proof vest. Which idiot would believe his cheap publicity stunt?

And typical of Kikuyu’s, they were busy cheering someone trying to pretend to be on their level, yet he drinks Blue Label for breakfast, a drink many Kikuyu’s will die before ever tasting. Mkokoteni pushers could be heard shouting “Uhuru Ni Wetu” yet the dumb clowns cannot even afford one meal per day.

That one tribe can be molested by one family for consecutive generations, yet claim to be the “Jews of Kenya” is the most disheartening of situations one can ever encounter.

Kikuyu’s are such retards, that upon the announcement that Kenyatta had “won” the stolen elections, they walked to Gatundu to stand vigil outside Mama Ngina’s gate, and went back home to no lights and empty stomachs. Others were robbing motorists along Mai Mahiiu Road under the pretext of celebrating Uhuru’s win.

Surely, is this a community that is doing well under the backdrop of their President being in power? Shouldn’t they be lending the rest of us money, instead of begging us to provide them with soft loans?