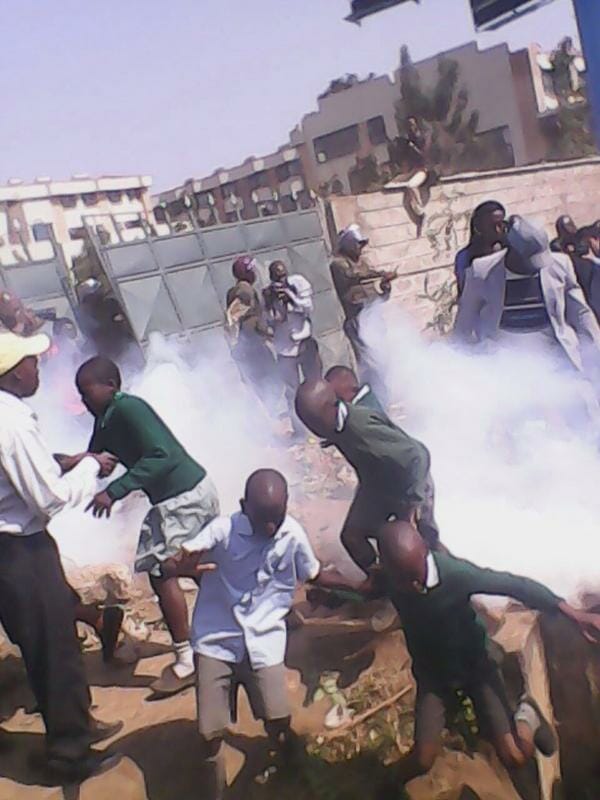 It is hard to figure out the use of teargas against protesting pupils. It is also heart breaking that land grabbing has become a national disaster in this country without efforts from the leaders to nip the vice in the bud.

Langata Road Primary school playground was allegedly grabbed by Weston hotel, a hotel being owned by William Ruto according to several dailies. Many Kenyans have always condemned land grabbing in this country but it seems we are fighting a losing battle. Weston hotel curved the land to create parking space. The playground must be given back to the school, that is a demand from us, we the people.

If we had war against land grabbing, then we lost it a long time ago

Swazuri confirmed that the land belongs to Langata Road primary school. * Snip ** . So  there was a protest organized by some activists to protest against the grabbing and since I reside in Langata, I decided to go there because I also need accountability.

When the protest started very young children were there- mostly Langata road primary school pupils . It somehow turned out to be violent and police had to use teargas. The children were caught in between  the mess. The question is, should you use children to achieve your activism goals? Exposing them to those dangers ?

I raised this question on Twitter …. people have really attacked me. They are saying the Kids were right in protesting because it is their playground that was grabbed . Would you like your 5 year old Kid to be in between a violent protest in the name of their Rights ? Hypocritical question  ?

Children have always been used for evil purposes. Recently, Hamas had very good PR. Their visuals were golden: injured kids, who were mostly used as human shields. Israel lost the social media and sympathy war after the pictures were posted on social media. Read here

This is a hard question . But the simple answer may be… it is right to use the children as afar as they are not yours **Snip****. Now that is what Activism has become.

Wait for the story in the papers tomorrow . ” Police Teargas Children “. They will not raise the question whether it is good to ” Use Kids ” in protests  and exposing them to dangers … The police can argue that the Kids were victims of circumstances at the right place at the wrong time but the Activists CANNOT justify the use of children to achieve their activism goals !

This is my challenge. Next time let the activists attend a violent protest with their family and toddlers . Well…