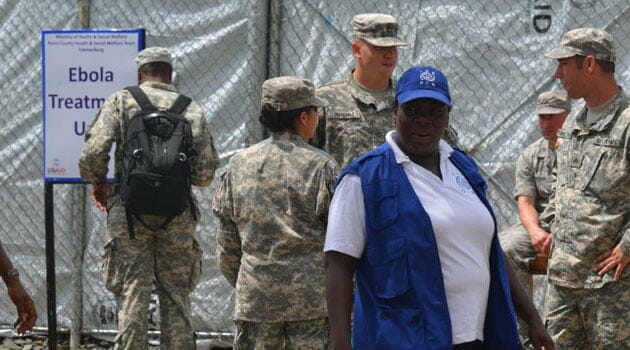 The United States staged a military ceremony Thursday to end its five-month Ebola mission in Liberia, with the west African nation in recovery from the worst-ever outbreak of the virus.

A force that at one point reached 2,800 has been gradually scaled back since the epidemic began to recede, and the Pentagon has announced that “nearly all” troops will be gone by the end of April.

“The importance of the progress we see today means more than just the reduction in the number of new or suspected cases of Ebola,” said mission commander Major General Gary Volesky.

“This progress is also about Liberians being able to get back to a normal way of life.”

The 101st Airborne Division (Air Assault) “cased its colours” — the ceremonial folding and stowing of the flag — in Monrovia, marking the end of the “Joint Forces Command United Assistance” mission.

The Pentagon says around 100 US troops are to remain in the region to strengthen “disease preparedness and surveillance capacity” of local governments.

Liberia, once the country worst hit by Ebola, has registered 4,037 of around 9,600 deaths in the epidemic, which began in Guinea in December 2013.