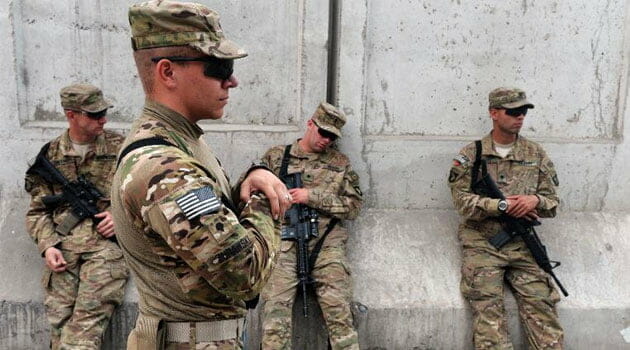 US Defense Secretary Ashton Carter’s comments in Kabul offered the clearest sign yet that Washington was ready to delay the closure of some bases and retain more troops after appeals by Afghanistan’s new President Ashraf Ghani and advice from commanders.

To safeguard “hard-won” progress, Obama “is considering a number of options to reinforce our support for President Ghani’s security strategy, including possible changes to the timeline for our drawdown of US troops,” Carter said after talks with Afghan leaders.

“That could mean taking another look at the timing and sequencing of base closures to ensure we have the right array of coalition capabilities,” he said at a joint news conference with Ghani.

Apart from troop numbers, the United States and its allies would need to make “long-term commitments in resources, equipment and other support” to ensure the success of the Afghan forces, he said.

Carter’s visit comes amid a sharp rise in Afghan casualties from the 13-year conflict, with the UN recording a 22 percent increase in the number of civilians killed and injured in 2014 due to an intensification in ground fighting between government and insurgent forces.

It also comes as Obama faces a decision about the timetable for a troop drawdown in Afghanistan. Under the current plan, the 10,000-strong US force is due to drop to roughly 5,000 by the end of 2015 and then pull out altogether by the time Obama leaves office in two years.

But the Obama administration already has delayed the pace of the withdrawal, allowing 1,000 additional American forces to remain this year.

And the US commander on the ground, General John Campbell, has suggested he favours slowing the drawdown further, though the details of the possible options before Obama remain unclear.

Afghan leaders and some lawmakers have urged Obama to reconsider the withdrawal timetable, warning that an early US exit could jeopardise security and international aid.

Carter said as part of the review of the pullout plan, Washington was also was “rethinking the details of the counter-terrorism mission” that currently targets Al-Qaeda militants with raids by US and Afghan special forces and drone strikes.

He said the single most important factor that had prompted the review of the troop withdrawal timetable was the formation of a unity government last year led by Ghani, which he said had introduced “certainty” and “predictability”.

“That’s something we couldn’t have counted on a few months ago,” he said, calling it “major change”.

On the first day of a two-day visit, Carter held talks with the US commander in Kabul, Campbell, as well as General Lloyd Austin, head of US Central Command which oversees American forces in the Middle East and Central Asia.

His trip coincides with a concerted effort by Ghani to promote peace talks between Kabul and the Taliban, with Pakistan voicing strong support for the initiative.

Ghani declined to confirm whether Taliban leaders were now ready to enter into direct negotiations with his government, but he said the conditions were ripe for a potential breakthrough.

“The grounds for peace have never been better in the last 36 years,” Ghani said.

He said he was “hopeful” and “the direction is positive”. But he added: “We cannot make premature announcements.”

The United States and a Taliban spokesman this week denied there were new plans to hold peace talks in Qatar, despite claims by some militant leaders.

Asked about the presence of the Islamic State group in Afghanistan, Carter played down the threat, saying some Taliban insurgents were making an attempt at “rebranding” themselves.

“The reports I’ve seen still have them in small numbers and aspirational,” he said.

The United States first launched military action in Afghanistan after the September 11, 2001 attacks, toppling the Taliban regime that had refused to break ties with Al-Qaeda.

A US-led NATO force eventually swelled to 130,000 troops, but last year the mission wrapped up its combat operations against Taliban insurgents. A contingent of 12,500 foreign troops has remained to back up Afghanistan’s 350,000 soldiers and police.