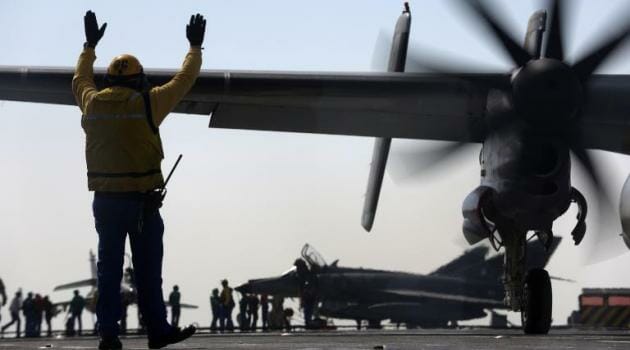 The US led coalition has carried out air strikes against the Islamic State group in northeastern Syria, where the jihadists have launched a new offensive and kidnapped 220 Assyrian Christians.

The raids on Thursday struck areas around the town of Tal Tamr in Hasakeh province, the Syrian Observatory for Human Rights said, without giving information on possible casualties.

They followed the launch Monday of a new offensive by IS, which kidnapped the Assyrians as it seized territory around Tal Tamr.

The town remains under the control of Kurdish forces, but at least 10 surrounding villages have been seized by IS, along with the captives.

Many of those abducted are said to be women, children or elderly.

The Observatory said negotiations were ongoing “through mediators from Arab tribes and a member of the Assyrian community” to secure their release.

The IS offensive has killed at least 35 jihadists and 25 members of the Kurdish People’s Protection Units (YPG) and of an Assyrian defence force, according to the Observatory.

The fighting and kidnappings prompted around 5,000 people to flee the countryside, with many seeking refuge in Qamishli, a large city in the province that is controlled by Kurdish and regime forces.

“We’ve received around 200 families who are being hosted in local homes,” Jean Tolo, of Qamishli’s Assyrian Organisation for Relief and Development, told AFP.

“The people arriving are desperate. They are coming with nothing, they left everything behind.”

Others made their way to Hasakeh city, the provincial capital, describing harrowing journeys after fleeing in their pyjamas.

The United States and United Nations denounced the mass abduction of Christians — the first of its kind in the country — and demanded their release.

“ISIL’s latest targeting of a religious minority is only further testament to its brutal and inhumane treatment of all those who disagree with its divisive goals and toxic beliefs,” State Department spokeswoman Jen Psaki said, using another abbreviation for IS.

UN High Commissioner for Refugees Antonio Guterres told the UN Security Council that “the nature of the refugee crisis is changing” and called for “massive international support” for countries that have opened their borders to fleeing civilians.

“As the level of despair rises, and the available protection space shrinks, we are approaching a dangerous turning point,” he told the 15-member council.

Close to 12 million people have been displaced by the nearly four-year war in Syria including 3.8 million who have fled to neighbouring countries such as Turkey, now the biggest refugee-hosting country in the world.

IS is accused of multiple abuses against minorities in the areas under its control in Iraq, Syria and elsewhere.

Last week, a video emerged showing its fighters in Libya beheading 21 Christians, most of them Egyptian Copts.

Such grisly videos have become a hallmark of the group, with one British-accented militant from the organisation appearing in multiple videos showing killings of foreign hostages.

He was first named by the BBC and Washington Post, with the International Centre for the Study of Radicalisation think tank saying it believed the identity to be “accurate and correct”.

The conflict began with peaceful pro democracy protests against President Bashar al-Assad but escalated into a civil war that brought foreign jihadists flocking to the country.

In other developments, UN peace envoy Staffan de Mistura will travel to Syria for talks about a new plan for a six-week freeze of fighting in Aleppo, the UN spokesman said.

“He will be heading to Damascus on Saturday to meet with senior Syrian government officials to follow up, obviously, on the cessation of hostilities and to have further consultations,” Stephane Dujarric said.

De Mistura said earlier this month that Damascus was willing to suspend aerial bombardment and artillery fire on Aleppo for six weeks.

US intelligence chief James Clapper meanwhile said he thought Turkey did not place a high priority on fighting IS and that foreign fighters were able to travel through the country into Syria as a result.

“I think Turkey has other priorities and other interests,” the director of national intelligence told the Senate Armed Services Committee.