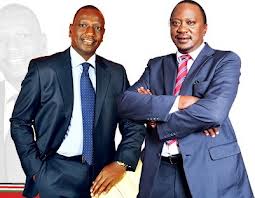 The United Republican Party (URP) and The National Alliance (TNA) party has unveiled a new political party – Jubilee Alliance Party – ahead of 2017 General Election. TNA Secretary General Onyango Oloo and his counterpart from URP Fred Muteti made the announcement Friday adding that the registration of ‘the new vehicle’ had been formalised at the Registrar of Political Parties.

The new party will be chaired by Nelson Dzuiya and Veronica Nduati the Secretary General. David Murathe takes the post of Vice Chair while Caleb Kipkemei Kositany is the Deputy Secretary General. TNA and URP had struck a deal to conduct joint nomination exercise for the Kajiado Central parliamentary by-election which is set for March 16.
The two parties said they would not risk fielding rival candidates as this may disadvantage them from taking the seat. Mr Oloo said speculations on who will carry the flag between TNA and URP on the Kajiado by-elections will now come to an end as the two parties will conduct a joint nomination.
“We (TNA) are conducting a joint nomination with URP but the candidate who will be unveiled after the nominations will be unveiled through the Jubilee Alliance Party and not TNA or URP. This is a step towards ensuring that the two parties work together, “Mr Oloo said in a press conference held at TNA offices in Nairobi Friday.
The Standard