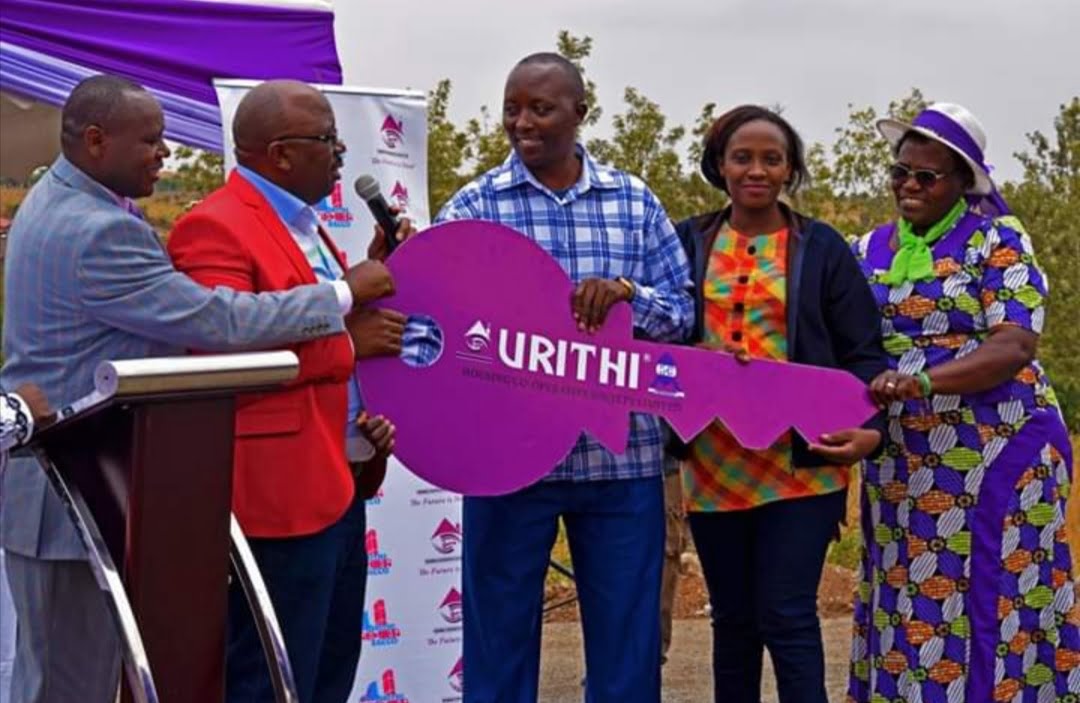 Samuel Maina, the chairman of Urithi Housing Sacco with microphone in hand makes a symbolic gesture of giving away keys to completed houses in 2019. The exercise was a PR one meant to pacify irate clients who had put the Sacco to task to produce their title deeds and complete the housing projects.

Urithi Housing Sacco is on the verge of collapse and its recent PR overdrive in the mainstream media is meant to slow down and pacify the anger its clients have against the entity.

In an article written recently by a local media house, the embattled Sacco Chairman Samuel Maina wrongly blamed the housing sector woes on the Covid-19 pandemic and asked the government to create a sh50 billion fund to cushion actors in the industry

Samuel Maina, the chairman, said real estate was the most hit because of the capital intensity in the sector.

The capitalisation is very high…unlike other sectors you have to inject a lot of money to buy land and develop with financing coming from lenders,” he said

However, the rogue Sacco boss known for his charm lied.

As early as April 2019, the Sacco was facing financial problems that culminated into a meeting with the clients where Samuel Maina got away because he lied that he was going to get a sh3 billion loan from Uhuru Kenyatta’s government.

In that meeting, there were complaints that members had not gotten their title deeds, some for more than 5 years. Other members were angered by the slow pace of construction.

Panorama Gardens, Olive Tola Project, Nakuru Kiambogo Bungalows, Birmingham Woodlands City etc are some of the projects clients were complaining about in 2019.

Fast forward to 2020, disgruntled clients of the Sacco have formed a Telegram group to share ideas of how to tackle the Sacco.

Many members, after waiting for more than 5 years are now getting smart knowing that Urithi has been a scam all along. Most of them are even warning their relatives abroad about the loss-making rogue Sacco.

Urithi is collapsing but the recent PR overdrive even as Mr Maina appeared on the media with a claim that it was not true that the company was in financial problems.

The collapsing Sacco has been unable to pay its employees for months. Staff and clients agree on one thing; Mr Maina is a crook and the lack of money currently is due to embezzlement of the Sacco’s finance, by many CEOs and the chairman.

Many have been trying since last year to get their shares refunded, after they were promised to be given their tittle deed for the lands they bought.

‘Clients are tuck with receipts though it takes a maximum one month to get a tittle in Kenya’, a client lamented.

All of those who were complaining about not getting tite deeds and their houses not completed in 2019 are still on the same depressing endeavor.

“The Sacco is targeting to get as much money from Kenyans in Diaspora and I would warn anyone who is buying or knows anyone buying not to invest a dollar with Urithi Sacco, until we get a confirmation from the Embassy or from the Office of the President”, an teary-eyed client said.

Scammed members of Urithi Sacco now fear that their hard-earned savings will go down the drain.

Most put their retirement savings, collectively running into billions, in the projects done by Urithi and are now staring at uncertainty. They are now calling on the government to arrest Urithi management and help them recover their money.

‘Kindly request the President to intervene on our behalf and not allow companies like Urithi and greedy CEO’s and so called “chairmen” to rob wananchi”, they said.