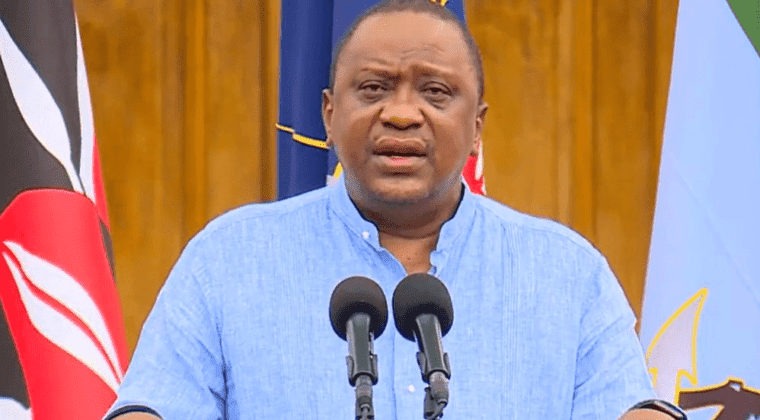 The misguided war on alcohol/bars didn’t start yesterday. It started the moment Uhuru ascended to the presidency in 2013 where despite his well-known battle with alcoholism, he anchored his legacy with the aspirations of the religious community who view alcohol as competition for tithes and offerings.

It begun with a very subtle decree which many couldn’t connect to the broader picture, where together with former Nairobi Governor Evans Kidero, they banned commercial sex workers (twilight girls) from operating along then busy and well-lit Koinange Street.

The move was lauded by the religious community, who by then were operating as a department in Statehouse and were in bed with the very people oppressing them today.

Prostitution did not end with that superficial move aimed at appealing to the highly excitable media and self-righteous gallery, because vices like insecurity, prostitution and alcoholism are largely resolved through proper and concerted efforts at job/opportunity creation.

Soon after, President Uhuru Kenyatta introduced the “Alcoblow” police road-blocks, at first enforced by the National Transportation and Safety Authority (NTSA) and then later taken over by the National Police. Beyond being obvious extortion road-blocks as unearthed by an internal investigation, they served a greater economic damage.

First, these roadblocks were mounted on all strategic arteries connecting to the Central Business District and along major highways connecting to different towns. This deterred people from traveling to the CBD at night leading to the eventual death of nightlife in the city. Clubs which died during Uhuru’s tenure include Zeep, Club Soundd, Club Psys, Riviera, San Burners, Hooters, New Verandah, Maggie’s, Tacos, Tanager, Dodi’s, Wine Bar, Tribeka, Florida NightClubs, Dolce, and many many others.

Those bars evoke nostalgia and are associated with good memories of Kibaki’s era of prosperity.

All these outlets were job creators for many young Kenyans in the hospitality and entertainment industries but it happened so slowly that nobody noticed the deliberate state-sponsored impoverishment strategy. One wonders what interest Uhuru would have in participating in the diminished stature of Nairobi as a leading tourism and entertainment hub in the region.

Beyond the ill-advised alcoblow selectively targeting middle-class drivers yet its PSV’s which cause most accidents, Uhuru begun enforcing an illegal and silent curfew where police would arrest anyone found walking at night and charged with “loitering” by the complicit Director of Public Prosecutions (DPP).

Foot traffic consisted of the biggest client base of CBD outlets and with police arresting those on foot, they faced ultimate closure due to lack of patrons.

It is perhaps July 2015 where the President would display his utter contempt for alcohol and entertainment yet, despite its obvious contribution to taxes and creation of jobs/opportunities in the country.

Uhuru convened a meeting with all MP’s from regions where it was rumored that alcoholism on the rise, and vowed to wage a war on illicit brews. Due to the selective interpretation of presidential directives by the corrupt police structure, bars and liquor stores became collateral damage from the combined assault from both the provincial administration and county governments.

The truth of the matter is that alcohol became a default mode of therapy for the rising cases of joblessness and destitution for many youths in the upcountry, where mismanagement and eventual collapse core employment industries like coffee, tea, tourism led to thousands of job losses.

Once again, Uhuru was able to use the church and media to wage a misguided war on so-called “illicit brews” which themselves were plants built at high cost, and companies which were employing many Kenyans directly and supporting more through service provision.

One would then wonder why a country’s president would outrightly undermine industry instead of creating incentives for grown. Currently in the country, Konyagi, a Tanzanian Gin brand has acquired a sizable market share, competing with the big brands meaning that those companies that Uhuru demolished would probably be exporting regionally by now.

We would have expected the Ministry of Trade to bring together all indigenous alcohol manufacturers for capacity building, tax concessions, seminars of marketing and exporting, etc. But Uhuru has cognitive bias where confrontation is his only default. When you have a hammer, everything looks like a nail.

Then in late 2017, then health Minister Cleophas Mailu would issue a gazette notice instructed by Uhuru to ban Sheesha (water pipe tobacco smoking). The irony is that the president is a known chain-smoker and even without any proof or empirical evidence as to the adverse health effects of smoking Sheesha, he still derived immense pleasure from once again, making our lives miserable.

We were shocked to read in one of the dailies that President Uhuru Kenyatta begun waging a war on betting after attending the 2018 Singapore Grand Prix and seeing a Kenyan outfit sponsoring one of the Formula 1 (F1) teams. He was apparently infuriated wondering how a Kenyan startup could scale such heights.

He then begun spinning a narrative through a top blogger, citing betting as a gambling addiction, setting the stage for the closure of one company, but the emergence of three others who have since capture the market share. So the war wasn’t against betting as a combined vice, but it was a war against a company where anti-competitive measures were applied to antagonize and eliminate them.

The persecuted company had nurtured so many performing artistes and entertainment industry professionals and their exit signaled tough times for an already depressed sector.

One would have expected the President of the nation to celebrate a Kenyan company scaling the heights to global success, but his tenure has been marred by his short-sighted, narrow minded vested interests where anyone who looks like they can acquire more wealth than their family, is deliberately curtailed.

In 2019, Uhuru in a brazen and spectacular display of force and impunity, dispatched the DCI boss George Kinoti, to simultaneously raid companies in the alcohol brewing sector. He raided both Keroche Breweries and Africa Wines and Spirits, causing the arrest of Tabitha Karanja and Humphrey Kariuki.

At its peak, Africa Wines & Spirits were manufacturing Blue Moon Vodka and engaging many entertainers as brand ambassadors plus promoting events operated by young entrepreneurs in the entertainment industry. The company’s closure and eventual theft of Kshs. 2 Billion by DCI officers meant that many in our line were directly affected.

But it was the 2020 Corona pandemic that Uhuru saw a golden opportunity to obliterate young people working in the hospitality and entertainment industries. Using narratives concocted by “experts” hailing from the Ministry of Health (MoH) and the Kenya Private Sector Alliance (KEPSA), they drew the conclusion that the novel Covid virus only spread in bars, social gatherings and restaurants.

Instead of using science and data, they extended their war on bars and the hospitality industry and exploited a pandemic for their nihilistic and narcissistic agenda of oppressing the youth and diminishing their sources of livelihood.

We have exercised restraint but the 8 years of slow and consistent economic genocide waged by the very person elected to incubate our growth, has further emboldened him to continue with his toxic agenda of suppressing us so as to fulfill his sterile political agenda.

That even in the midst of a pandemic and mass-scale economic hardships, he opted to launch a constitutional review process and further escalated infections triggering the third wave, is evidence of his insensitivity to the plight of ordinary Kenyans.

This is a call for Kenyans to peacefully protest against this coordinated and inherent contempt by the government towards our jobs, sources of income and livelihoods. We are all directly affected and our silence has been misconstrued for consent.

We have loosely assembled under the hashtag #UnlockOurCountry demanding a FULL and UNCONDITIONAL reopening of our country. So far the messaging from the authorities indicates that they are neither willing nor ready to embrace our demands thus the need for physical street protests.

We ask members of local & international media, independent bloggers, fashion bloggers, lawyers, hospitality operators, entertainment industry operators, university students, grassroots movements, community based organizations, umbrella organizations/unions in entertainment and transport sectors and all Kenyans of goodwill to join us as we take our demands to the next level.

Our rights and abilities to secure decent livelihoods is constantly being encroached upon by the ruling class and there comes a time when ENOUGH IS ENOUGH!