I have noticed a gap in the information doing rounds about the above subject. I have pointers on the same that I think you should let people know.

The first thing that I thought you should know is that the said aircraft was grounded for some while before resuming operation. It has been having maintenance issues and has been on and off operation. It is also crucial that you note that the same company had a similar caravan (C208) with registration 5YNON. This aircraft has had a number of mishaps during its operation. It has overrun Wilson Airport’s runway on landing, got grounded, went for maintenance for a very long time…to date. Why am I talking about a different aircraft; here are more facts.

This has been acting as a salvage for spares for the fateful Njambini Flysax crash. The engine running on the fateful 5YCAC was salvaged from this particular company aircraft. So why would a great and financially well company not afford new spares for its fleet? The aircraft might have easily passed the airworthiness tests as Mr Wako, the chairman would get an easy pass with KCAA, having served as a member of KCAA board previously. This is public knowledge.

Speaking of the same, the aircraft is said to be airworthy. Being in the aviation industry, I’m well versed with an equipment abbreviated ELT…Emergency Locator Transmitter. This is a gadget fitted on an aircraft. it works as follows.

In the unfortunate event that an aircraft crashes, its impact is sufficient to set it off. It, in turn, starts transmitting emergency signals on emergency frequencies. these are 121.5Mhz, 243.0Mhz and 406Mhz, to mention just a few.

These signals are sent via satellite…I won’t go through the whole procedure, but anyone can google about COSPAS SARSAT. This will send a very detailed signal to the air officials, notifying them of the unfortunate occurrence within minutes. among others, one will receive the registration of the aircraft, country of registration, coordinates of the occurrence and again, among many other details. Apparently, this ELT was not set off by the impact. else we would not have taken 43 hours to get these coordinates, and in the process strangling chances of saving any possible survivors. So did the aircraft have an ELT? Was it working? Was it certified by KCAA as airworthy without this crucial gadget?

Equipment used to locate such beacons are called ELBA…Emergency Locator Beacon Aircraft. They were to be purchased by KCAA but insider sources advice that the PS, Ministry of Transport limits number of air officials who are willing to travel out of the country for training on crucial courses that touch on Search and Rescue. They would actually spend their own money to go for the same training, the latest being early this year, which they were blatantly denied to go. (Public servants need to clearance from the PS before leaving the country on whatever matter.)

Another crucial equipment is the GPWS- Ground Proximity Warning System. Recent technology has Enhanced GPWS. This simply warns a pilot when the aircraft is near ground, for the pilot to take corrective actions in time. The EGPWS integrates with your selected route and warns of impending warnings of terrain. Was this C208 equipped with any of these? If yes, was it working?

In human factors, enough rest is important. Goes without saying. I won’t go deeper on this, but without enough rest and sleep, we accumulate fatigue. When it gets to a detrimental stage, hell breaks loose.

The crew of the fateful flight may have had such. I am saying this owing to these facts:

Within the same day, the same crew, Barbara and Jean, flew the same aircraft from Nairobi Wilson airport to Homabay airstrip and back. Another return trip was made to the Mara. This fateful trip was the third on the same day, and it was on the return leg that the crash happened. Could they have been fatigued? Doing this repeatedly within the same week? That’s anyone’s guess. Moreover, facts from the company state that crew had complained to their management of being overworked with little pay. Efforts to land a copy of this letter to my hand have not borne fruits yet. I don’t know what you gather out of this.

Another issue is, the aircraft was cleared to maintain 11000ft a.m.s.l. The crash happened at 9500ft a.m.s.l. This could fall into several categories, but ill pick one or two. Either the altimeter-the gadget used to tell the altitude- was faulty or this was due to pilot error. Again touching on the airworthiness of the plane, but let me focus on pilot error.

The requirements of a pilot before flying an IFR flight are well laid in the AIP-Aeronautical Information Publication- a document easily accessible at the KCAA website. This will sound rather complicated but I will try to simplify for any layman to understand. When the weather is bad(IMC conditions) all flights that need to fly with visual reference to ground are grounded. Only pilots who can fly with equipment ONLY(IFR rated pilots) are allowed to fly. In all cases, it is the responsibility of the pilot to know the procedures in the airspaces in which they fly. To know all prohibited, restricted or danger areas, terrain, airways and frequencies of units to be contacted, to follow the Jeppesen charts available to pilots in the area in which they fly. I am attaching a very relevant chart to the same route they were to fly, taking the flight to runway 24, which was the primary runway in use at the time. it clearly shows that the pilots should have gone higher when approaching the said position, AVENA. 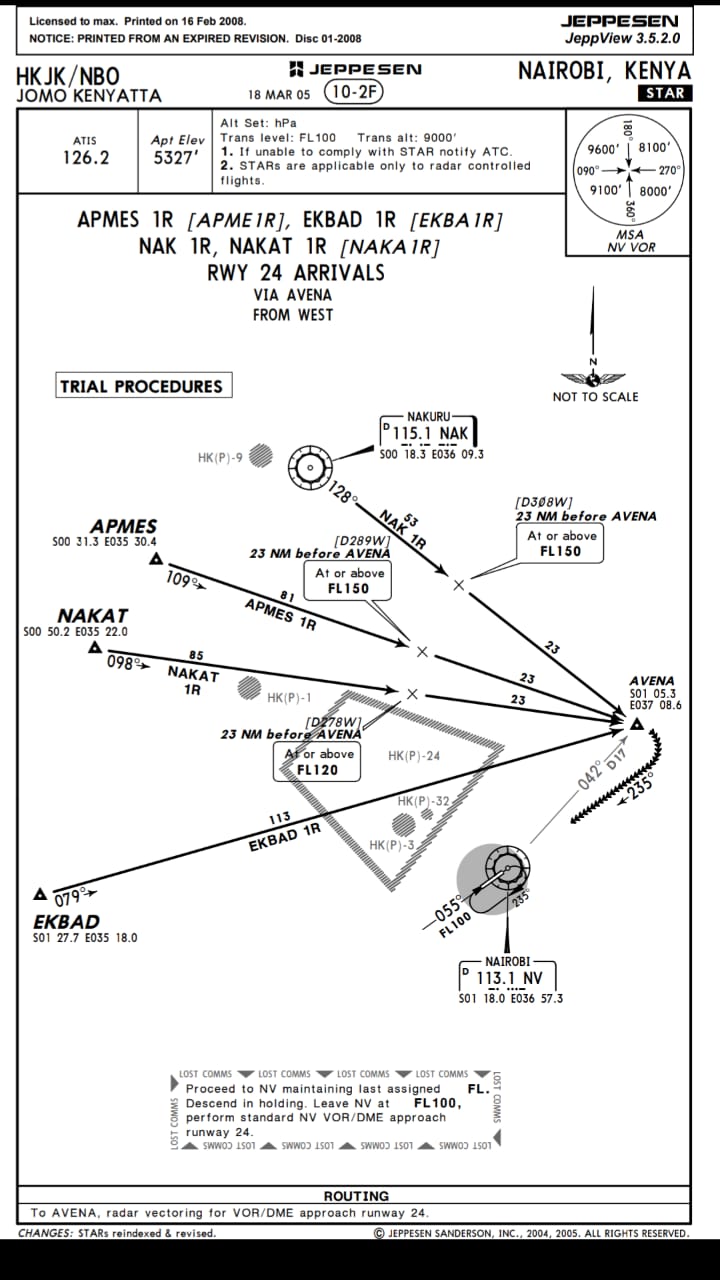 These pilots have mostly flown VFR (call them visual) flights. in deteriorated weather, they would request IFR (equipment guided) clearances until in areas of clear weather. On the fateful day, the weather was extremely bad. How well were they trained to fly in these conditions? This could most probably be the reason why they circled for long at Kitale before landing. This, in turn, delayed their departure from Kitale, flying in a blind airspace, below the authorized altitude and thereby hitting the peak of the hill. My thinking is FlySax should improve training for its crew and give them enough rest.

I am an aviator, and I cannot afford to come in the public domain to explain these facts lest I lose my job. If need be I may clarify one, two thing that may have passed.

For now, I will go by the name Hulk.
Thanks

Note: Apart from all these issues raised, the editor of this site strongly believes the plane was intentionally diverted by KCAA in order to crash so that the attention would shift from recent corruption scandals! Gilbert Kibe must resign to pave way for investigations.