The battle to meet members of Akorino church at Kasarani today has revealed the competition between President Uhuru Kenyatta and his deputy, William Ruto to control the church in the run-up to 2022 polls.

The meeting turned to be subject of conflict between the schedules of the two leaders.

DP Ruto had plans to meet the leaders of  Akorino church but that programme was flipped after President Kenyatta chose to meet the same group.

The sect then cancelled Ruto’s meeting which was planned to coincide with President Kenyatta’s trip to the Coast.

Akorino’s secretary Abraham Macharia confirmed that Ruto’s meeting was cancelled because the they chose to pray for the president at Kasarani on Sunday [today].

“The Deputy President’s meeting has been rescheduled to some other day this year. He had requested to meet us. Today, we will have 500 of our clergy pray for the president in our Akorino National Prayer Service,” said Macharia.

Ruto pressman Emmanuel Tallam also confirmed that the DP will boycott the Kasarani meeting and attend function at Ziwani AIC instead.

The drama around the religious events have exposed the role the church plays in the country’s politics. 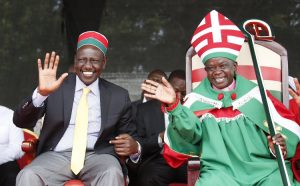 Ruto has been shining in church politics for a minute but his opponents are waking up now since they know he rallied the church in opposing the passing of the Constitution in 2010.

Building Bridges Initiative (BBI) drummers are trying to stop him from employing the strategy that can spoil their party.

In 2010, Ruto lured Evangelicals and Anglicans, to oppose a referendum that was pushed by former President Mwai Kibaki and ODM leader Raila Odinga.

Ruto is finding himself in the same position since his Tangatanga outfit is opposing BBI campaigns as they keep hoping from church to church.

His Karen residence hosted leaders of the East Africa Pentecostal Church from Meru, Tharaka Nithi, Embu, Nairobi, Isiolo counties and a group of Muslim women leaders on the same day in June.

The DP is always telling off politicians who criticise his church activities to mind their own businesses.

The church drama comes a day after Nandi Hills Mp Hon. Alfred Keter accused the PD and his allies of pretending to be politicians to ascend to top leadership.