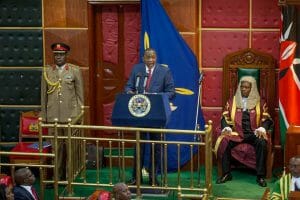 This is after his nemesis and Bungoma Senator Moses Wetangula and the other CORD brigade praised him for his historic speech in Parliament yesterday.

Speaking yesterday after listening to the father of the nation, Wetangula hailed Uhuru saying his address touched on virtually everything that concerns Kenyans, ranging from corruption, security, ethnicity and devolution.

“Let me give credit where it is due, Uhuru did excellent today. He touched on virtually everything that CORD wanted addressed beginning with corruption, ethnicity and security,” said Wetangula.

The Bungoma Senator, who is also the Senate Minority Leader, indicated that even former Prime Minister Raila Odinga is happy with President Kenyatta after the State of the Nation address.

He also thanked Uhuru for apologizing publicly on behalf of the Kenyan Government for the past atrocities committed by successive Governments.