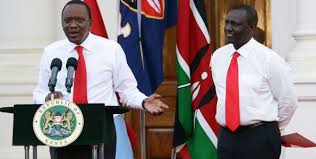 President Uhuru has been working day and night to win the Luhya voting Bloc but his recent Sugar deal with our Ugandan neighbors threatens to wash away all the  political foundations he had started setting up in Western . CORD is banking on this deal to render the Son of Jomo Politically irrelevant in the Western Region.

Will the Luhyas ever desert Raila and Vote for the Son of Jomo  ?

At first, everything seemed to flow smoothly. We had the recent state corporations appointments in which Eugene Wamalwa was elevated to the Cabinet.

As we CNYAKUNDI.COM Revealed, this was a miscalculated political mathematics . The cold fact is that Uhuru Goofed by thinking he will win the Western Region by appointing politicians or bailing out Mumias and others …

The appointment of Wamangoli was opposed by farmers who claimed he once looted Nzoia outgrowers company while he was chairman . Susan Wakhungu is Sister to former deputy president Moody Awori and Professor Judy Wakhungu’s Mother . Judy Wakhungu is Cabinet Secretary environment .

Some political analysts have accused the president of favoring some families and that is why his appointments in Western will never help him gain political millage.

For instance, Susan Wakhungu’s name featured prominently in a scam to fleece National Cereals and produce Board Billions sometimes Back .

6 ) Kombo – Chairman water services Board . I think Uhuru appointed him so that he can help clip Wetangula’s political wing but we are yet to see if this well calculated political move will work .

By the way Chris Okemo declined a slot in Kenya seed Board  due to outrage from Kenyans .

President Uhuru has done all this to gain political millage but all this may be washed away with the Sugar deal . Sad