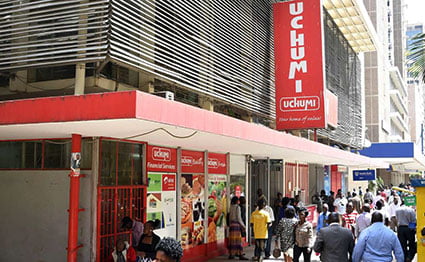 Retail chain Uchumi Supermarkets’ troubles have deepened after it was evicted from its Nairobi Industrial Area headquarters over its failure to pay millions of shillings in rent arrears.

It has emerged that Uchumi’s top management has not accessed the premises since October 2 when the Kenya National Trading Corporation (KNTC), the building owner, locked them out.

The lockout has seen Uchumi file two different suits in court for orders forcing KNTC to grant the retailer’s employees access to the premises.

Uchumi claims that the decision to deny its managers access is against the October 2 court order that suspended all judgments, decrees, attachment of properties, or distress for rent against it.

“The continuing closure of the company’s headquarters is severely hampering our operations. Our servers remain inoperative, effectively preventing the business from tracking and effecting payments as and when they fall due or carrying out other administrative duties that are critical to the company as a going concern,” Uchumi says in its petition of October 16.

There is no indication of how much money Uchumi owes KNTC, which is yet to respond to the petition.

The High Court on Wednesday directed Uchumi to serve KNTC and go back for directions on October 22.

Uchumi claims that locking up its headquarters is also hampering its participation in a winding-up petition filed by Githunguri Dairy Farmers Co-operative Society last month and frustrating recovery efforts.

Githunguri Dairy is seeking to wind up Uchumi over a Sh44.8 million debt. But the case has turned out to be a godsend for the retail chain, which used it as grounds to obtain court orders stopping all creditor actions.

KNTC is said to have instructed a private security firm, Cobra Security, to lock and take over the building.

Joel Kinyua Imitira, the KNTC acting managing director, in a letter dated October 1 informed Securita Kenya Limited, a private security firm Uchumi had hired to guard the premises, that the retail chain no longer operated from the facility.

The letter warned of ‘trespass on KNTC property’.

“In the light of the aforementioned, you are advised to withdraw your guards from the said premises immediately,” it said.

Uchumi On October 3 warned Mr Imitira that he would be cited for contempt of court if he didn’t open the offices in six days’ time.

Uchumi further asked the High Court to order KNTC to allow its staff back to the premises. But even before the suit was heard inter-parties, the retail chain filed another application on October 16 indicating the level of distress facing the firm.

The retailer wants the Industrial Area police boss — OCPD —to be directed to enforce orders asking KNTC to allow it back to the offices in the event the court grants such orders.

The firm says about 50 private guards have been deployed to block access to the offices and the gates are locked.

The development comes even as winding-up petition against Uchumi gathers pace. Five firms have in the past two weeks joined Githunguri Dairy’s winding-up suit, bringing the total claims so far to Sh471 million.

UBA Bank, which is owed Sh172 million, is already in the suit seeking to dispose of Uchumi’s land on Nairobi’s Langata Road to recover the debt.

Uchumi has been struggling under the weight of debts and a cash crunch that has affected its ability to pay staff salaries on time. The retail workers’ union has previously said that non-payment of salaries, which began last December, had affected 1,355 employees.

The retail chain, which owes suppliers over Sh3.6 billion, has been banking on the sale of land in Kasarani to turn around its fortunes but the money — estimated at Sh2.8 billion — has been slow in coming because of challenging approval processes.