This comes after the party’s secretary general Raphael Tuju vowed to bar the DP from accessing Jubilee headquarters in Pangani as they plot kick him [Ruto] out of the ruling party.

Mr Kiplagat said Jubilee does not deserve financial support from DP Ruto allies after the statement from Tuju.

The speaker was in the  company of elders from Uasin Gishu blamed the handshake between President Uhuru Kenyatta and ODM leader Raila Odinga for creating cracks in the Jubilee.

“We shall cease payment of subscription fee to Jubilee until the party’s National Executive Council (NEC) discusses and makes a determination on the purported suspension of the DP,” said Kiplagat. 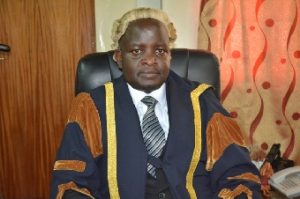 He also claimed that the plot to kick out Ruto is meant to intimidate him the him ahead of the 2022 polls where he has expressed his intention to succeed President Kenyatta.

“When did it become a crime for elected leaders to visit the headquarters of a party where they pay subscription fees every month? There are many parties in Kenya and we are ready to move out of Jubilee any time.”

The argitated Kiplagat further threw his weight behind Chief Justice David Maraga advisory to the president to dissolve the parliament for failing to implement 2/3 gender rule.

“We are asking the President to dissolve Parliament and we go to the election so that we see how many leaders will be re-elected on Jubilee party,” he added.

Uasin Gishu elder and cleric Paul Gathuo however blamed the fall out between the president and his deputy on the disunity in the Rift Valley, which bore the brunt of post-election violence in 2007-2008.

“As residents of the North Rift region, we will not allow the Jubilee politics to destroy the peace we have enjoyed for many years,” Gathuo said.

Former MCA David Karanja who was also with Kiplagat warned Jubilee brass to respect the Deputy Party leader if the party needs to regain confidence from disgruntled members and elected leaders.

Jubilee’s National Management Committee on Friday recommended to the NEC to kick out Ruto as deputy party leader for opening a rival party office (Jubilee Asili) and for going against party principles.

“That the NMC has recommended to the NEC that the DP ceases to be Deputy Party Leader after he opened the so-called Jubilee Asili offices that is reserved for him and his allies until such a time that this development of Jubilee Asili is discussed at the NEC,” he said.

Tuju also disclosed that the DP and his allies have been banned from accessing the party headquarters.