This is America filled with fear…from the North to the South, and East to West. Thank you God.

Those were the words of Osama Bin Laden in an audio message released following the September 9/11 terror attacks.

In a CNN documentary released in 2011, Peter Bergen, the CNN National Security Analyst pointed to the fact that US war on terror in the middle east and the region ‘had created a thousand other Bin Laden’s’, which USA and its allies would be dealing with ‘for at least a generation’.

Well, 7 years after the Al-Qaeda leader was killed by US special forces in Pakistan, that dire prophesy has come true.

The United States is offering a reward of up to $1m (Shs. 100,000,000) for information about one of the sons of the late al-Qaeda leader Osama Bin Laden. 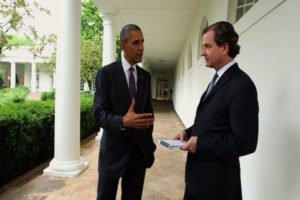 CAPTION: Peter Bergen with Former US President Obama at the White House

Hamza Bin Laden is emerging as a leader of the Islamist militant group, officials say.

He is thought to be based near the Afghan-Pakistani border.

Hamza, 30, who was put on the list of most wanted terrorists by the US 2 years ago, released audios and videos messages in 2016 calling on followers to attack the US and its Western allies in revenge for his father’s killing.

“If you think that your sinful crime that you committed in Abbottabad has passed without punishment, then you thought wrong,” he said.

Letters from Osama Bin Laden seized from his compound, in 2011, indicated that he had been grooming Hamza, thought to be his favourite son, to replace him as leader of al-Qaeda.

US Officials believe that Al-Qaeda is rebuilding.

“Al-Qaeda during this period has been relatively quiet, but that is a strategic pause, not a surrender,” said US Co-ordinator for Counter-terrorism Nathan Sales.

Below is a ‘recent’ photo of Hamza Bin Laden. 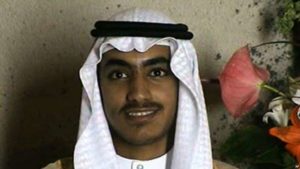 CAPTION: A file photo of Hamza bin Laden released by the CIA.

In this article:Bin Laden, Hamza, Osama, War on Terror