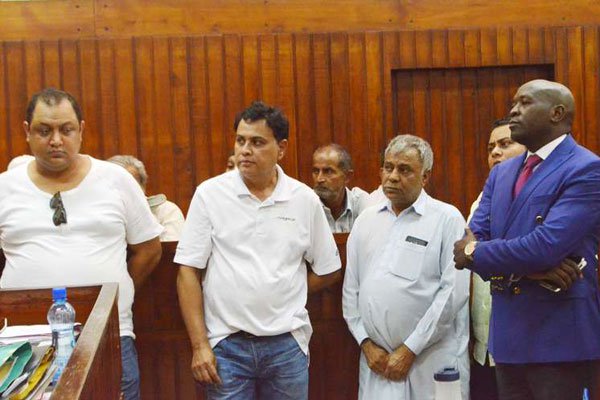 Akasha brothers on the dock

A billionaire of Asian origin, Madatali Chatur associated with the Diamond Plaza located at Highridge is disposing of his estate after being linked to the international drug trade. Last week Chatur put on sale all his Kenyan properties estimated to be worth Sh76.99 billion. Sources well versed with how the tycoon accumulated his wealth reveal that ever since the Akasha brothers were extradited to United States to face drug charges, he has been a worried man.

The Kenyan government extradited the sons of the slain drug baron Ibrahim Akasha – Baktash Akasha and his brother Ibrahim, Ghulam Hussein and Indian national Vijaygiri Goswami to the US to face drug charges.

US Drug Enforcement Agency had infiltrated what they termed as “Akasha organisation” that involved major smuggling operations linking poppy fields of Afghanistan that ended up in major European cities.
Informed sources say immediately after the arrest and extradition of Akashas, DEA managed to get useful information from the suspects that linked prominent politicians and tycoons in Kenya to the drug business.
According to sources, one of the arrested foreigners, it has emerged, used to operate from the office of Chatur and had close links with him.

Insiders well versed with the international fight against drug cartels reveal that secret agents have been profiling how Chatur amassed his wealth. It all started during the era of late Jomo Kenyatta when Chatur was operating as a radio and TV electrician along River Road, Nairobi.

By then, black and white television sets were the trend of the day.

Chatur was also repairing electronics at State House which enabled him to befriend Kenyatta’s allies. Many of them became his regular customers. With such connections, Chatur decided to go solo and opened his own shop in River Road where he sold imported TVs, radios and spare parts. Eventually, he established branches across Kenya, trading under Chatur Electronics.

With the drug business thriving in Columbia, Mexico and Pakistan, some of the barons, who were regular visitors in Kenya, decided to use Chatur, due to his political connections, to enter the East Africa market.
The barons were aware that TVs, Radios and other electronic spare parts, not forgetting torches, were ideal for smuggling drugs. It is through the drug empire that Chatur became a billionaire.

Using his political links, he acquired public properties in major towns in the country. He was allocated land by City Hall which he registered in the names of his private companies. Apart from being linked to drug business and fear of his properties being seized by the state, Chatur also fears that the National Land Commission is targeting part of the land he acquired irregularly.

Already, City Hall has given notice to tenants at New Muthaiga Mall and Scorpion Properties (Gigiri Mall), all associated with Chatur, to vacate.

The properties are to be demolished on grounds the building approvals were done irregularly.
New Muthaiga Shopping Mall, according to a case filed by the Ethics and Anti-Corruption Commission, sits on public land and is valued at Sh3 billion.

Aware that secret agents are out to link him and his son, Rahim to drug deals, Chatur has started disposing of his property.

According to the constitution, illegally acquired wealth including that gotten through money laundering and narcotics trade is frozen and taken over by the government.

It is not only Chatur estates that are on the radar, but his bank accounts suspected to be used in money laundering are also under probe.

Banking investigations have also been extended to DTB Bank where he operates accounts. Initially, Chatur had accounts with Fidelity Bank but the bank’s move to auction Diamond Plaza was blocked by the court after he petitioned.

When Nazlin Umar sued Chatur for upkeep in 2011, she attached a list of properties he owned.

Nazlin, who claimed the tycoon was her husband, was demanding Sh280 million upkeep.

Chatur had remarried Umar according to Muslim traditions after his first wife died abroad.

The separation by Umar came after she found Chatur in their matrimonial bedroom naked with four Lebanese girls, kissing him.

Chatur’s House is next to Diamond Plaza.

Chatur has vast tracts of land in Lokichogio, Maanzoni, Syokimau, Malindi, Mombasa and Mai Mahiu.
With the Akasha sons and their associates linking Chatur riches to drug business, he has no alternative but to sell his properties as he has no protection in Jubilee government.

President Uhuru Kenyatta is emerging as the darling of the West due to his fight against drugs and corruption.