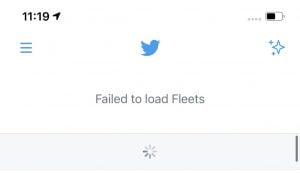 A courtesy screeshot showing the lag in Twitter Fleets

Users have flicked Twitter’s latest update that is clearly a clone of Facebook’s ‘WhatsApp Status’ or Instagram ‘Reels’.

Twitter fleets are so annoying, it's so slow so you press multiple times and then you end up skipping 10 slides

According to reports, users with the Fleets feature were experiencing difficulties with the app, with Twitter lagging, freezing and even crashing completely.

We’re slowing down the rollout of Fleets to fix some performance and stability problems. If you don’t have the feature yet, you may not get it for a few more days.

We love that so many people are using Fleets and want to ensure we’re providing the best experience for everyone.

Users have cussed Twitter for their not only massive censorship but also cloned updates.

One person wrote, “Literally no-one asked for this. All we wanted was an edit button.”

“We don’t want it. We want to be able to edit tweets for five minutes after they’re posted. We want better analytics. We want more consistency in our news feed. Stop fixing stuff that isn’t broken & adding stuff that no one asked for. If we wanted ‘stories’ then we’d use Instagram,” replied another user.

Well according to Jack Dorsey’s app, Fleets are for sharing momentary thoughts that help start conversations and only stick around for 24 hours.

Twitter has simply cloned an update from Facebook’s Instagram where-Reels, in this case Fleets, appear when a user’s profile picture is clicked.

Twitter is simply rather has already lost its glory and simplicity.

either this or get rid of fleets itself pic.twitter.com/fiXwfFl2uk

Thank you, Twitter, for the opportunity to be EVEN more annoying! #Fleets pic.twitter.com/eE4eLbpacj

Twitter first started testing Fleets in Brazil back in March, before gradually expanding the option to more, smaller regions up till June.

Then Fleets was seemingly shelved for several months. Maybe they were told held up with this.

Stop worrying about Fleets and start focusing on Trumps dangerous and false tweets.

Was it because Twitter was focusing its efforts on the US Election? Check Trump’s tweets you’ll understand.

But then, last week, Fleets were expanded to Japan, Twitter’s second-biggest user market.

Then Twitter decided to go all-in, and it seems like it may have underestimated the sudden surge in usage, leading to these back-end issues. 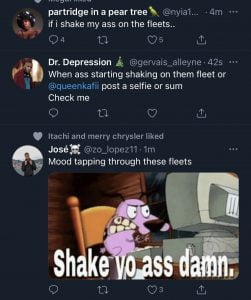 The Ass Culture that Twitter, which boasts of ‘protecting its community’ wants on the Timelines

Twitter, which unfortunately bans and censors influential and factual content creators now wants to dilute their already watered down app with fleets to attract ASS Tweets and Pussypreneurs from the collapsing Instagram.

Are you okay with the Fleets thing?