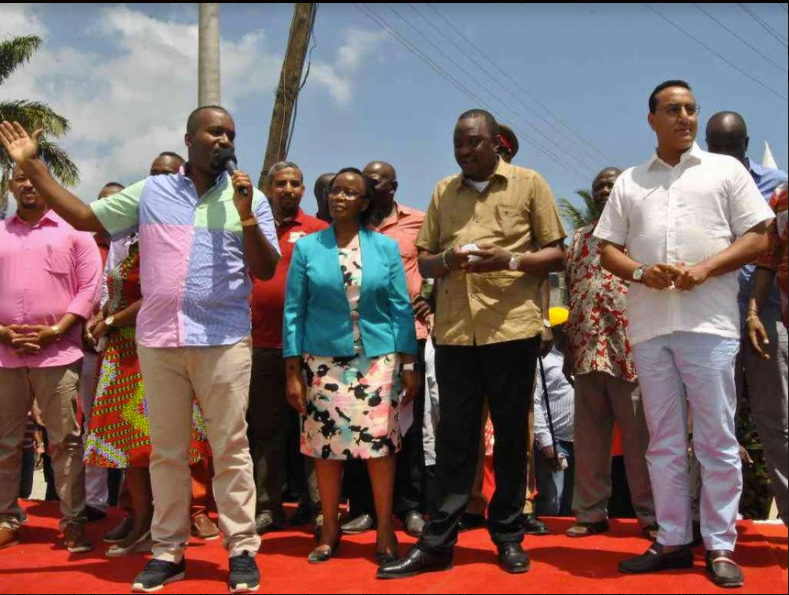 Bored and idle whilst holidaying on taxpayers money in Mombasa when the rest of the country has resumed work, President Uhuru Kenyatta asked to open a dead project, conceptualised in 2010, but stalled since he took over office.

You will all notice that many projects planned during the Grand Coalition Government were intentionally sabotaged by Jubilee mandarins, who sought to overturn them and bag the tenders.

Projects like the Lamu Port, the Greenfield Terminal, were halted by Uhuru, yet they were anchored under the Vision 2030 scheme. The only projects Uhuru wasn’t able to touch were those which had already commenced, for instance the Southern Bypass in Nairobi and the Isiolo-Moyale Road. To date, the Isiolo Airport has never been opened because Uhuru wants to wait last minute and while using it as bait to lure the regions vote.

But we urge Kenyans to stay woke, because these projects were there and could have been completed by 2014 if the Grand Coalition Government got another term in office.

Today, the clip of Mombasa Governor Hassan Joho proved that indeed, this year will be a different campaign. CORD will confront Uhuru with facts and figures and not heckling and tribal sentiment by empty debes like Lillie Odhiambo, James Orengo, Johnstone Muthama, Anyang Nyongo and that other wanker who is the MP for Ruaraka.

Muthama first and foremost is a piece of shit who shouldn’t be allowed to take photos with Raila. Anytime he opens his mouth, CORD loses 10,000 votes.

From their rhetoric, we can tell that this lot don’t like the Kikuyu’s, but also that cannot be used as Raila’s sole campaign strategy.

Everyday we are busy looking through comments on social media. Kikuyu’s are disgruntled more than ever especially the business community. Raila has to make the deliberate effort to activate in Central region beginning with interviews on Kikuyu radio stations.

Yesterday Joho tackled Uhuru with flair and confidence. Telling him straight to his face not to hoodwink Coast residents using 2010 projects. The message was clear; “show us what you have done.” And when you think about it, Uhuru has done fuck-all since he assumed presidency.

I mean, when a head of state is being advised by an asshole like Jomo Gecaga, marijuana addicts like David Murathe, and moronic imbeciles like Njee Muturi, what do you expect? Njee first and foremost, could not practice/thrive as a lawyer due to his inherent stupidity. He found a soft-landing, carrying Uhuru’s bag. Now what an insult it is to real lawyers, when they see an India-reject like Njee Muturi being Solicitor-General.

David Murathe’s nickname apparently is “Aidé-dé-Bhang” for his side-hustle of carrying weed on behalf of the artist formerly known as “Ganja 1” , a nickname popular on the streets of KOT. Ati “Murathe ndio yubebea hule jamaa ndom”

When Uhuru got to office, it was one big party in Statehouse that he forgot to work. He was flying to watch Formula 1 in Abu Dhabi, meeting with Akon, and the likes. He was launching phantom projects like public toilets in Machakos, officiating First Lady’s Marathon and this year, he even went a step further to launch lights at KICC.

To Uhuru, presidency is one big roller-coaster.

Now it’s crunch-time and desperation has kicked in. Today he was launching a foot-bridge in Mombasa, due to a scarcity of a portfolio which can act as his catalogue of achievements. He has been flossing with Kibaki’s projects, and officiating launches of dubious initiatives.

So the forthcoming election is Raila’s to lose.

The first thing Raila can do is reach out to Central region through TownHall meetings, engaging young people who are particularly disenfranchised by the Jubilee mediocrity. Concentrate on Kiambu County, where Uhuru has completely lost ground.

There was a time when Diageo’s leadership who had paid a courtesy call on Statehouse, compelled Uhuru to crack down on independent alcohol manufacturers. He then convened MPigs who were tasked with the role, where the legislators hired goons to raid and vandalise the companies. Such are the people that Raila should reach out to, since they are also investors who shouldn’t be harassed by State organs.

There has to be a deliberate effort to bad the +1 vote, because I don’t remember Raila donating his “few” Kikuyu votes to his opponents, out of contempt for the community. Every vote matters.

Joho got Uhuru SWEATING! Takes special balls to take on an opponent right in his face this way pic.twitter.com/ARGfi2zJ7s