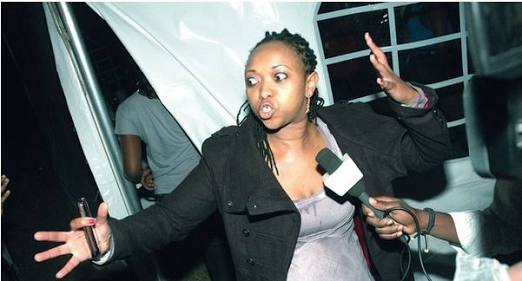 CAPTION: The ever-angry Ciku Muiruri, one of the glaring signs of feminist rage. Feminists are always angry because the happiness they sought in living male lives, is turning out to be the biggest source of their misery.

It seems that a constantly self-reinventing feminism loves to attach “culture” to the end of anything it sees as threatening – Rape Culture, Male culture of privilege, and of course Bro Culture.

Of late, we have seen rabid feminists hyper-ventilate on the #MeToo campaign, with ridiculous sometimes two-decade old rape stories emerging from nowhere, a scheme hatched for the sole purpose of countering patriarchy in their own convoluted way.

The irony is how the “Patriarchy” is being replaced by a much realized Matriarchy in the name of “equality”. Feminism is the new Fascism, or worse still, radical Islamism. The more power women get, the more insane their claims of victimhood will become. That’s what’s so troubling.

There was a time I recollect Ciku Muiruri ranting on social-media, how Muthaiga Country Club doesn’t allow women to its Sergeant’s Bar. And rightly so; because bitches are an unnecessary distraction. Which leads me to the question; why do women desperately want/ruthlessly demand to invade male spaces? The greatest motivator for the Rabid Feminists invasion and destruction of all male spaces- it basically not just keeps men from enlightening each other, but also keeps men from setting up systems that would support their needs.

By its very nature, Rabid Feminism which is practiced by women of Ciku Muiruri’s nature, will always seek an unequal state – maximum restriction of male sexuality and maximal unrestriction of optimized feminine imperative. 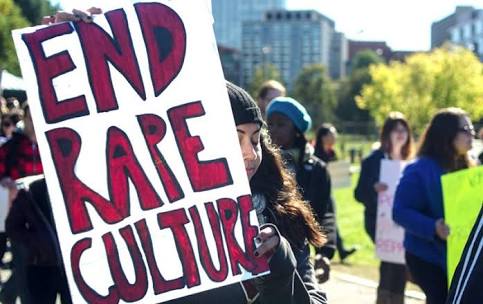 By attaching the word “culture” with a word, it becomes more spectacular. For instance, The Rape Culture, or The Culture of Impunity, etc.
Milo Yiannopoulos has an excellent two-part article, Sexodus, on Breitbart London outlining the cultural impact socialized Hypergamy is having on men today and how they are “checking out of society”.

“Men, driven, as many of them like to say, by fact and not emotion, can see that society is not fair to them and more dangerous for them. They point to the fact that they are more likely to be murder victims and more likely to commit suicide. Women do not choose to serve in the Armed Forces and they experience fewer deaths and injuries in the line of work generally.

Women get shorter custodial sentences for the same crimes. There are more scholarships available to them in college. They receive better and cheaper healthcare, and can pick from favourable insurance packages available only to girls. When it comes to children, women are presumed to be the primary caregiver and given preferential treatment by the courts. They have more, better contraceptive options.

Some might call these statistical trends “female privilege.” Yet everywhere and at all times, say men’s rights advocates, the “lived experiences” and perceived oppression of women is given a hundred per cent of the airtime, in defiance of the reality that women haven’t just achieved parity with men but have overtaken them in almost every conceivable respect. What inequalities remain are the result of women’s choices, say respectable feminist academics such as Christina Hoff Sommers, not structural biases.

And yet men are constantly beaten up over bizarre invented concepts such as rape culture and patriarchal privilege. The bizarre but inevitable conclusion of all this is that women are fueling their own unhappiness by driving men to consider them as sex objects and nothing more, because the thought of engaging in a relationship with a woman is horrifying, or too exhausting to contemplate.”

My recent run-in with radio station announcer Adelle Onyango and her gallery of feminist-mercenaries was because I saw through her game-plan. Play victim, solicit sympathy, create a movement, emasculate men and ultimately make money. Well my only problem was the emasculation part; otherwise she is free to work her ass off, or think up a new solution that would change her fortunes.

Women like to be in control, but they hate the toil it takes to build something up and be in control of it. Women want ready made men. Or the man in the garage. Women love to come in after something has been built, be in a position to control or manipulate, and claim look what I can do. Look at Sheryl Sanderberg for instance, she didn’t build facebook, yet she’s the poster icon for women running something.

Adelle and others like Janet Mbugua are aptly referred to as “Outrage CArokers” . They’ve found a niche at projecting themselves as victims and have realised that by rallying other women involuntarily, you immediately create a movement. Label a man a ‘rapist’ in the slightest degree of seriousness and you have carte blanche to kill him or destroy his life and livelihood. 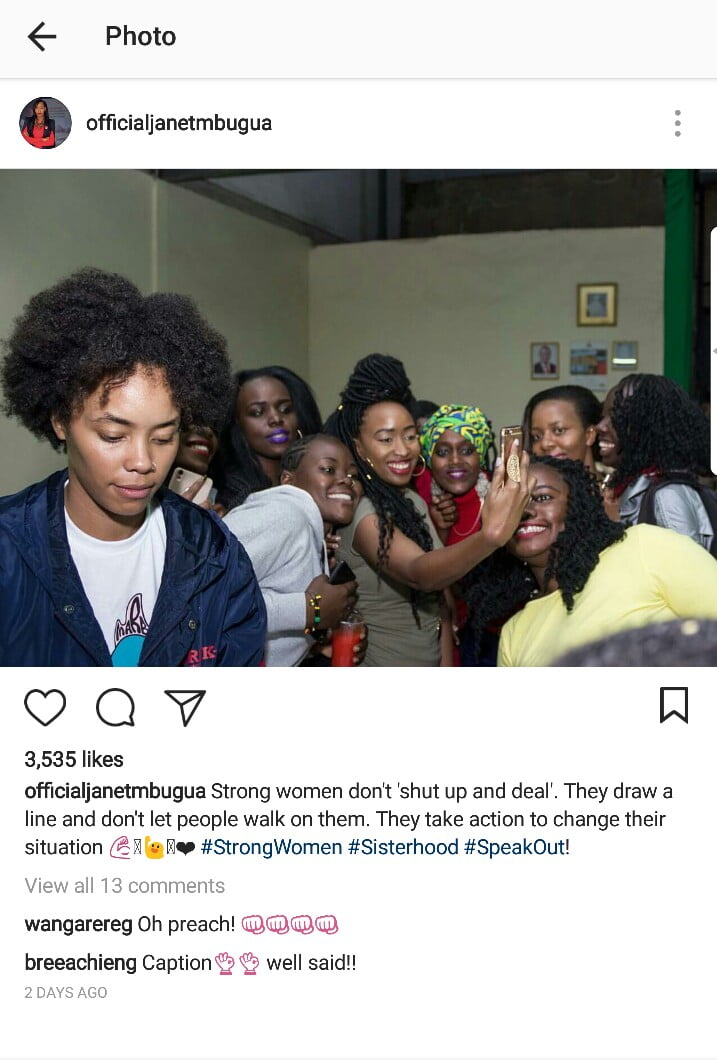 CAPTION: Janet Mbugua waxing lyrical on “strong women” a concept she probably can’t even rationalise herself, being a kid brought up in privilege and using sexism to climb up the corporate ladder. Bitch pliz!

This system is designed to create conflict, but that conflict is rooted in the presumption that men are always at fault in it. This is why there can never be an equalist solution to correcting the endemic problems of modern inter-gender relations, under the barrage of feminist ambitions.

We have seen the structural set-up of Nairobi flip 360 degrees. Men are now more emasculated, women are occupying all the senior positions in corporate companies yet the output and productivity is at its worst in years, and to cap it all up, the same women are constantly bemoaning the “lack of quality men”. Many are stretching their unmarried years beyond 30’s, whilst carelessly harping on the fact that there are no men worth their salt.

This emasculation of our gender by a few rabid feminists has come at great cost. It has also been enabled by a few men controlling key political and financial positions in the country. Men who have played along and conspired with rabid feminists to suppress young men.

To the men out there who can see through this toxic movement, to the women who desire for their sons, brothers and father’s to regain the respect they once courted, please support my mission to dismantle toxic feminism. I will be calling on your support in days to come, for us to help the boy-child re-assert himself as an active participant in Nation building, not an emasculated spectator, who has been bullied to submission for no fault of his own.