Kenya’s anti-drugs agency, NACADA,  has warned parents against drinking alcohol in the presence of children as it appealed to good kenyans to report such cases for immediate action.

The authority’s chair Mabel Imbuga said in a statement on  Saturday that they are concerned about people drinking alcohol from home. She said the growing trend is exposing underages to alcohol at an alarming rate.

She further stated that the trend also undermines the protective home environment for students who are home to prevent spread of Covid-19.

“We appeal to members of the public to report such cases to NACADA through our toll-free line No. 1192″ Imbuga said.

Nacada also called on parents to take advantage of the situation to create an alcohol-free home environment as well as build closer relationships with their children. Data from the surveys by NACADA attributed the high prevalence of drug amongst school going children to drug use at home.

Imbuga cited surveys by the authority which attributed the high prevalence of drug abuse in primary and secondary schools to drug use at home. 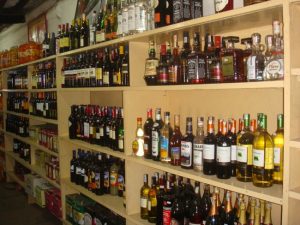 Samples of alcohol in a liqour store. [p/courtesy]

The proposals if implemented, will send the alcohol industry into shock waves, and with Nacada now targeting homes, many businesses that sell alcohol will shut.

“Our hope is that these restrictions do not leave the home as the main alternative to those wishing to indulge in drinking,” Imbuga said.

Many businesses including bars were shut when stricter measures were introduced to combat covid-19 pandemic but joints selling take away liquor has been enjoying a big boom since many kenyans resorted to drink at home.

If the agency goes ahead to target such joints and people enjoying beer parties at home then move is expected to further have a negative impact on businesses.