Floods have swept through three villages in Marigat, forcing more than 100 families to flee their homes.

This is despite the construction of dykes at the cost of Ksh. 11 million five months ago to control storm water.

The dykes that were erected along the banks of Perkerra River failed to sustain the pressure of the storm water following the heavy rains.

The project under National Water Harvesting and Storage Authority was launched by Water and Irrigation Cabinet Secretary Simon Chelugui in August 3, 2019 after flood hit the villages of Ng’ambo, Sintaan and Leswa.

Though the project was completed four months ago the villages have been submerged. 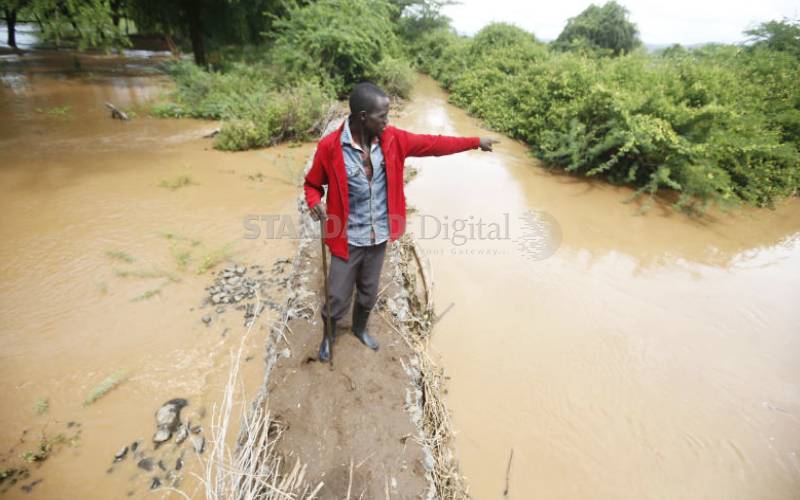 Massive destruction from floods continues to be experienced, despite the project having been completed.

Three schools including Ng’ambo Primary and Secondary Schols were affected and learners were forced to seek refuge.

Residents have started leaving the area while others claim they have lost property. More than 100 families have fled.

Simon Nkoroto, a local at Sintaan Village, said he lost all his property in the floods.

At the time of visit he was at home wading in water as he tried to save what remained behind.
“I have lost all my property, all my crops and produce swept away,” Nkoroto said.

Levis Kikenyi said though two flood gates were constructed they were not much help.

“We are being told to move to higher areas, but almost all of this area is flat. We are trying to avoid this place as the water keeps increasing each day,” said Washington Kauraki.

Wafula said no lives have been lost.