The Wall Street Journal published an OP-ED from John Ratcliffe, the director of US National Intelligence which revealed why China poses the pre-eminent national security threat to the U.S.

John Ratcliffe, who was a Republican former member of Congress from Texas and the CIA did not immediately respond to requests to elaborate on the notion that China sought to create Human super soldiers. 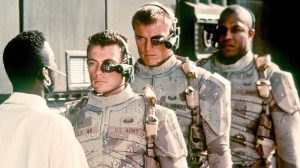 A Courtesy image of characters in the Universal Soldier movie

If the Intelligence leak is something to go by, China will have Modified Human soldiers of the sort depicted in Hollywood films like Captain America, Bloodshot and Universal Soldier.

According to the Elsa Kania and Wilson VornDick, China plans to have almost immortal soldiers using the gene-editing tool CRISPR, short for “clusters of regularly interspaced short palindromic repeats.”

“While the potential leveraging of CRISPR to increase human capabilities on the future battlefield remains only a hypothetical possibility at the present, there are indications that Chinese military researchers are starting to explore its potential,” Elsa Kania, an expert on Chinese defence technology at the Center for a New American Security wrote.

On his side, Wilson VornDick, a consultant on China matters and former Navy officer quoted a 2015 military newspaper that stated that the

“Chinese military scientists and strategists have consistently emphasized that biotechnology could become a ‘new strategic commanding heights of the future Revolution in Military Affairs.”

In 2017, one prominent Chinese general was quoted stating that;

“Modern biotechnology and its integration with information, nano(technology), and the cognitive, etc. domains will have revolutionary influences upon weapons and equipment, the combat spaces, the forms of warfare, and military theories.”

In a phone interview with NBC News, VornDick said that that he is less concerned about the battlefield advantage such research might provide. What worries him is the consequences of tampering with human genes.

“When we start playing around with genetic organisms, there could be unforeseen consequences,”

Representatives of the Chinese government did not immediately respond to a request for comment.

The overall message of Ratcliffe’s opinion piece is that China is a dangerous adversary that threatens not only American economic and national security but also global peace.

“The People’s Republic of China poses the greatest threat to America today and the greatest threat to democracy and freedom world-wide since World War II. The intelligence is clear: Beijing intends to dominate the U.S. and the rest of the planet economically, militarily and technologically.” John Ratcliffe stated in his OP-ED.

Since Donald Trump has less than 60 days in the Oval Office, will President-elect Joe Biden be honest about China?