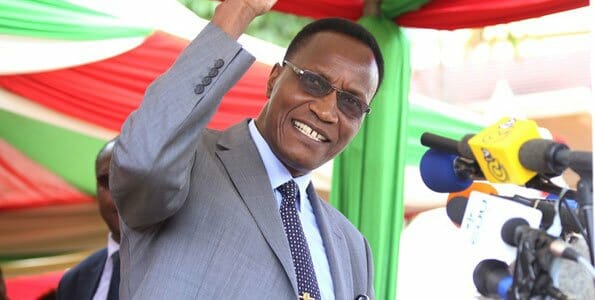 Drama unfolded at Mitihani House near State House in Nairobi after Chavakali High School Principal Kahi Indimuli collapsed upon realising that his school’s Kenya Certificate Secondary Education final results had been cancelled over alleged exam irregularities.
Indimuli travelled to Nairobi to collect the KCSE results as a composed principal believing that his school would repeat the sterling performance in 2013 exams when it emerged eighth nationally.
After the release of the results by the Education cabinet secretary Jacob Kaimenyi, all principals retreated to various offices to collect their results from their respective county directors of education. It was a shock for Indimuli after he was told that Chavakali’s results had been cancelled due to alleged cheating in Mathematics and English language.

We could not confirm if indeed he wetted his pants as those offering first aid watched in utter disbelief. The school had registered 307 candidates for the exams. Apart from Chavakali, other national schools that had results cancelled include Nyabururu Girls and the once prestigious Kisii High School all from Kisii county.
Indimuli had to be helped by colleagues to get out of Mitihani House building after he received calls from his deputy and teachers who were anxious to know the school’s performance as the students waited nervously to pour onto the Kakamega-Kisumu road to start celebrations. But when word reached the school to the effect that the exams results had been cancelled, bitterly shocked teachers, parents and candidates wailed. At the school, students were sent home to avoid a strike and mayhem. It was a hectic time for the school deputy principal Mudevi Benedict as he tried to control the situation.
The principal is said to have confided in his deputy that the results had been cancelled.
The parents became rowdy and were forced out of the school by security guards as they demanded explanation from the school administration. The following day, more parents jammed the school but there was no one to brief them on what had happened.
“Nobody is receiving us to tell us what is happening. Gates have been closed to parents. It has been very expensive paying school fees, but I am seeing a Y,” the parent complained.
Others say that it is rivalry between principals who undermine each other to excel academically by bribing officers at Mitihani House.
For the whole week, the school’s main gate remained closed to parents as other parties came to terms with the tragedy that had befallen their school.
A source said Indimuli was making frantic efforts to the Kenya National Examinations Council in Nairobi to get to the bottom of the sad news that had befallen the school.
In 2013, it was in position eight nationally and produced the sixth best candidate. The 2013 results showed the school had 81 As, 89 A-s, 83 B+s, 30 Bs and five B-s. No candidate scored below B minus then. They had posted a mean grade of A-, impeccable sources have divulged. It is claimed that the school performed well after the principal working in cahoots with corrupt officials at Mitihani House had exams leaked at a fee running into millions of shillings. Indimuli is alleged to have made a downpayment and promised to finish once the results were out, sources allege. To the surprise of those involved, he started taking them in circles as they were not paid as initially agreed.
The said KNEC officials are said to have sworn to teach Indimuli a severe lesson, hence the cancellation of the recent results. Indimuli was initially at Vihiga High School but was moved to Chavakali through political patronage. Surprisingly, results of Vihiga High School were also cancelled.
Since his arrival at Chavakali, parents have been complaining of paying high fees compared to other national schools. Indimuli is driven in state-of-art-cars and is always accompanied by bodyguards for unknown security worries.
Kisii High School had 145 results out of the 323 students cancelled. For Nyabururu Girls, all the results were not released. This is not the first time the two schools have found themselves in trouble. In 2009, the council cancelled results for 91 students at Kisii High School over cheating while in 2013; results for 260 candidates from Nyabururu Girls were withheld only to be released after investigations were carried out.
We could not establish whether it is true that officials at KNEC withhold exam results to armtwist principals to part with millions of shillings before eventually clearing them.
Others who were affected include 50 students of Bishop Sulumeti Girls High School in Kakamega county. In Bungoma, Chebukaka Girls had 144 candidates results cancelled while at Sangalo Secondary and Lwanda Girls students missed their Mathematics, History and government results. As other principals were celebrating, Indimuli. KNEC has been on the spot after its immediate former chief executive officer Paul Wassanga was mentioned in corrupt deals with a UK firm over printing of exam papers.