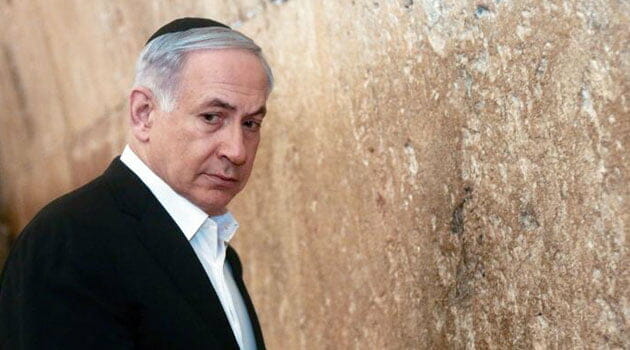 Israeli Prime Minister Benjamin Netanyahu arrived in Washington on Sunday for a “historic” quest to stop an international nuclear deal with Iran sought by the United States.
“We know a great deal about the emerging agreement,” a member of Netanyahu’s entourage said on condition of anonymity.

“In our view, it is a bad agreement.”

He would not indicate the source of the “excellent information” Israelis have about the deal, saying only that Netanyahu would elaborate when he addresses US lawmakers on Tuesday.

Israel worries that Iran and world powers will likely clinch a deal that eases international sanctions on Tehran without applying sufficiently stringent safeguards to halt its nuclear drive.

Netanyahu’s trip comes just four weeks before a March 31 target for a framework deal with Iran. Negotiators intend to pin down the technical details of a comprehensive agreement by June 30.

The so-called P5+1 group of Britain, China, France, Russia, the United States and Germany are trying to strike an accord that would prevent Tehran from developing a nuclear bomb.

In return, the West would ease punishing sanctions imposed on Tehran over its nuclear program, which Iran insists is purely civilian.

Netanyahu’s controversial 48-hour visit has stoked discord with US President Barack Obama and brought bilateral relations to their lowest point in years.

On Tuesday, he is due to speak before a joint session of the US Congress to drum up last-minute support to halt a possible world deal with Iran over its nuclear program.

It has infuriated the White House and prominent Democrats because the speech was set up by congressional Republicans without consulting with the president, violating usual protocol.

Several leading members of America’s political establishment have announced they plan to skip the address.

Netanyahu, who will also speak at the annual policy conference of the powerful pro-Israel AIPAC lobby on Monday, has refused to back down.

“I’m going to Washington on a fateful, even historic, mission,” Netanyahu told reporters on the tarmac at Ben Gurion airport near Tel Aviv shortly before his plane took off.

“I feel deep and sincere concern for the security of Israel’s citizens and for the fate of the state and of all our people,” he added.

“I will do everything in my power to ensure our future.”