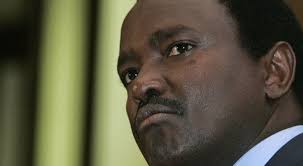 Yatta MP Francis Mwangangi has rubbished last week’s Wiper leaders’ meeting convened by party leader Kalonzo Musyoka.
Mr Mwangangi said the eagerly awaited meeting did not live up to the expectations of participants and the community at large. The Muungano Party legislator said Mr Kalonzo should apologise to Ukambani leaders and residents who expected the meeting to culminate in major announcements about the community’s political destiny. ”Although I am not a Wiper member, my major concern is about failure by a person regarded as the spokesman of the community to deliver on the expectations of the people he is leading,” said Mwangangi. He added: ”If the agenda of the forum was not about the political destiny of the region, he should have brought up development issues like the Konza city and Thwake and Yatta dams projects for discussion,” he said. He also expressed concern over how members of Makueni County Assembly defied the party leader’s directive not to impeach their governor. ”These are strong signs that he is losing grip of the party,” he said.