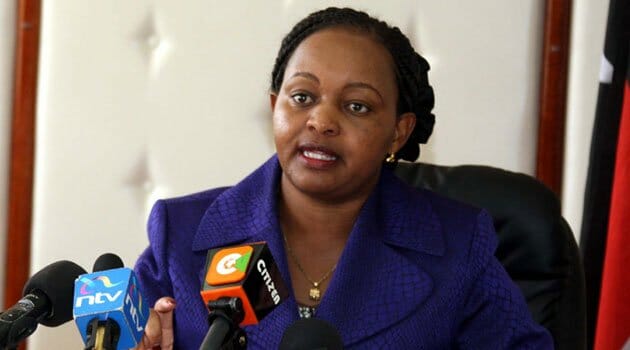 Devolution secretary Anne Waiguru has renewed her battle with Internet giant Google, from whom she is seeking compensation for an alleged defamatory story that was published by a Kenyan blogger.

Ms Waiguru has filed a fresh suit against California-based Google, its subsidiary Blogger Inc and Kenyan website Daily Post seeking payment for the story, which was published in the wake of President Uhuru Kenyatta’s sacking of the former chairman of the Youth Development Fund, Gor Semelango.

Ms Waiguru had in a separate suit last year sued Google and its Kenyan subsidiary Google Kenya seeking to compel them to reveal owners of the Daily Post website.

She now wants the global search engine held liable for the article alongside Daily Post, which authored the allegedly defamatory story.

“I was shocked and embarrassed after reading the defamatory materials. As a public officer, the offending material has caused me trauma, reason wherefore I pray for judgment against Daily Post, Blogger Inc and Google Inc jointly and severally for general damages, aggravated and exemplary damages and the costs of this suit,” Ms Waiguru says in court papers.

The suit, a first of its kind in Kenya, is expected to define the boundaries of liability for online carriers of material posted by third parties. With the responsibility of carriers still debatable, the suit is set to determine whether they can be held accountable for actions of their clients.

The Devolution head has asked the court to summon Google Inc to court within 15 days, as required by law when a party to a suit is based outside the court’s jurisdiction. Both Google and Blogger Inc are located in Mountain View, California. In addition to damages, Ms Waiguru wants Blogger Inc – Google’s content management system – ordered to pull down the content.

She argues that the matter must be determined urgently, as the story is still being used to bully her and her family.

“The suit cannot be heard until the respondents are served with all the pleadings. Since the material is freely available on the World Wide Web to anyone with a computer, smartphone or tablet, it has been used to bully, harass and embarrass my school-going children,” adds Ms Waiguru.

Google is yet to respond to the suit as Ms Waiguru is in the process of serving it with the court papers.

Ms Waiguru says the two stories published in April and May last year were aimed at attacking her before the widest possible audience. She has been listed as the only witness in the suit so far, but has asked for the door to be left open in the event others need to be summoned as the suit proceeds.

Ms Waiguru had in last year’s petition asked Justice Isaac Lenaola to compel Google to reveal the owners of Daily Post, holding that their identities were in the search engine’s records database. She also sued the search engine’s local subsidiary in that instance.

Ms Waiguru had told the court that her quest to seek legal redress for the said damage to her reputation was being frustrated by Google’s refusal to furnish her with the identities and contact details of the Daily Post’s owners.

Google Kenya subsequently distanced itself from the matter, arguing that it only does marketing and support services for its parent firm. The subsidiary added that it has no authority to pull down the story or reveal the owners of any of its clients, including the Daily Post.

But Ms Waiguru insisted that being a subsidiary of Google Inc in Kenya meant the firm had the records in its possession, and had been in a position to prevent the defamatory stories from being found on its search database.

Google Kenya had also argued that Ms Waiguru had not shown any violation of her rights on its part. The firm further said that Ms Waiguru’s petition was a defamation suit against a wrong entity disguised as a constitutional petition.

Google Kenya said it had informed Ms Waiguru of the process she needs to follow to find out the owners of the Daily Post. Justice Lenaola declined to strike Google Kenya from the suit, arguing that it was too early to tell whether the firm was aware of the offensive material and if it could have been able to prevent its publication.

Information before the court was not enough to determine with certainty that Google Kenya had no responsibility whatsoever in the allegations Ms Waiguru made in her petition, the judge argued, adding that it would suffer no harm by participating in the proceedings.