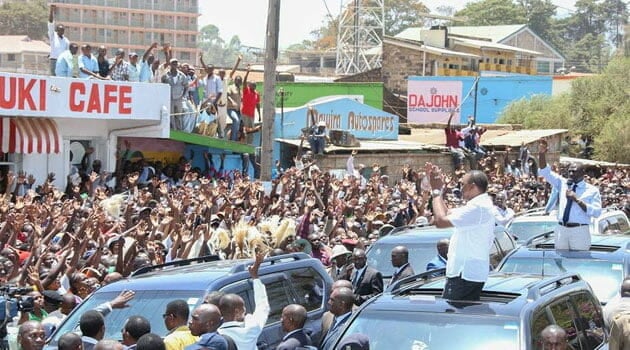 President Uhuru Kenyatta has asked Jubilee affiliate parties to unite under the Jubilee Alliance Party (JAP).
The President said the coming together of the parties under one roof will consolidate the alliance’s strength and prevent divisions.

“Let us not be divided because of parties. Our focus should always be in uniting Kenyans,” President Kenyatta said.

The President spoke today when he made stop-overs at Nkubu, Kariene, Gitimbini and Gakoromone to address citizens at the start of his two-day working visit in Meru County.

He said the parties’ unity will help the Government realize its development targets.

“There is no need for leaders who have a similar agenda to be in a multiplicity of parties,” President Kenyatta said.

Deputy President William Ruto urged leaders to heed the President’s call for all parties in Jubilee to come together as JAP.

He said the Jubilee Government’s agenda is to transform Kenya for the benefit of all citizens and that why it is focused on implementing development projects across the country.

President Kenyatta also launched the construction of the Meru-Mitunguu-Ciakariga road and the Meru Eastern bypass, and opened Kariene Market.

He asked leaders to stop squabbles and work for the residents of Meru, adding that the aim of the Jubilee Government is to unite all Kenyans in development.

The Head of State disclosed that the Government has planned a comprehensive health insurance under the National Hospital Insurance Fund (NHIF) and asked Kenyans to join it.

“Kenyans should do this so that the suffering over huge medical bills ends,” the President said.

President Kenyatta also assured that the Government’s programme of connecting electricity to all primary schools is on course and homes must benefit from it.

“This will reduce the connection charges for the citizens of Kenya,”the President said.

On education, President Kenyatta said the Government will from this year pay exam fees for candidates in all public primary and secondary schools.