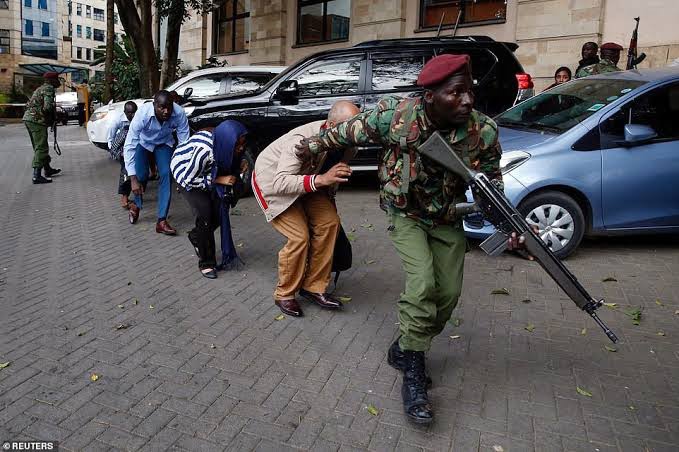 Last week we were treated to the horrific terror attack at 14 Riverside Drive, where hotels and commercial buildings were under the siege of Al Shabaab terrorists claiming to fight a holy war of liberating Somalia from the chokehold of KDF.

The sooner Kenyans come to terms with the realization that for as long as KDF is in Kismayu, these threats will remain part and parcel of us, the better it will be. Then we will stop these knee-jerk reactions and delusional initiatives meant to obscure the real issues.

Indeed, Kenya Red Cross Secretary General Abbas Gullet was on television hosted by the advertorial program Jeff Koinange Live, where they treated us to the circus of projecting humanitarianism as if it’s an economic activity earning Kenya massive cash injections and investments.

We cannot invest time and energy in humanitarian efforts without thinking of mitigating disaster. There has to be a commensurate effort and investment in crisis mitigation. How do we avert a crisis even before it happens? If we did that, Red Cross would be irrelevant. They’re only relevant because of our weakness in mitigating disasters.

An often overlooked sector is the security guards. Currently, there’s an estimated 500,000 security guards working formally under security companies strewn across the country.

There exists a structural weakness in the way this industry is being handled. And if it is well managed, then the risk of terrorism can be completely eradicated.

Picture this, the suicide bomber who blew himself up at the Hidden Garden Restaurant had been frequenting the facility weeks prior to the terror attack. He always tipped the waiters heavily and the guards. Why are guards so easily induced with handouts and tips? Well let’s delve into that.

An investigation by this website reveals that there are probably 300 registered security firms in Kenya. Of this, only less than 5 companies have complied with the labor requirement and minimum wage guidelines as announced by President Uhuru Kenyatta in Labor Day 2018. These companies are G4S, KK Security, Wells Fargo and Ultimate Security.

By compliance with the labor guideline, we mean payment of a salary not less than Kshs. 12,000/month, working on 12-hour shifts with one day off per week, giving annual leave, transport allowance, medical/pension covers and the meal allowance.

So less than 30,000 guards have been properly compensated and covered. The rest are paid measly salaries of 5,000-7,000 Kenya shillings, with no terms of benefits.

Which is why everywhere you as a Kenyan goes, you will always find a guard asking you to “nunua Chai” because they’re overworked and underpaid. Why do security companies pay peanuts to their guards? Well because in Kenya, companies, Government agencies and key installations tender for security services, and under-charge so as to “win” the tender.

Most politicians, wheeler-dealers and politically connected people have opened security firms because it’s easy money. For instance, former MPig Jamleck Kamau owns Brinks Security Company. Using his connections, he’s able to get contracts for Government agencies, because all he has to do is under-quote. In-turn, all he has to do is underpay his guards.

This is the crux of the matter. Every Kenyan here knows how easy it is to compromise a guard with just 100 Bob. Because they are paid peanuts and have to either solicit for bribes or work 2 jobs. Meaning that they’ll have to supplement their income by even engaging in criminal activities in the same places they’re guarding.

So before we start thinking about arming security guards, let’s concentrate on their welfare first. How do you give someone who earns 5,000 a gun? Won’t he use it to perpetrate criminal activities to supplement his/her income?

Which is why I’m asking Fred Matiang’i to tread cautiously. Arming security guards is not a quick-fix panacea meant to resolve the terror threat. First and foremost, companies, Government agencies and key installations should stop using cost, as the only criteria to vet/approve security companies.

Cheap is expensive. The cheaper a security tender is, the higher the risk. I’m pretty sure the company which manned 14 Riverside main entrance is one of those which don’t pay their guards well. And I’m equally certain that the company in-charge used cost as the only criteria to approve that contract.

The difference between meeting guard’s proper terms could have a lasting impact in resolving this terrorism crisis.

We will continue with Part 2 of our analysis of the Kenyan security structure.