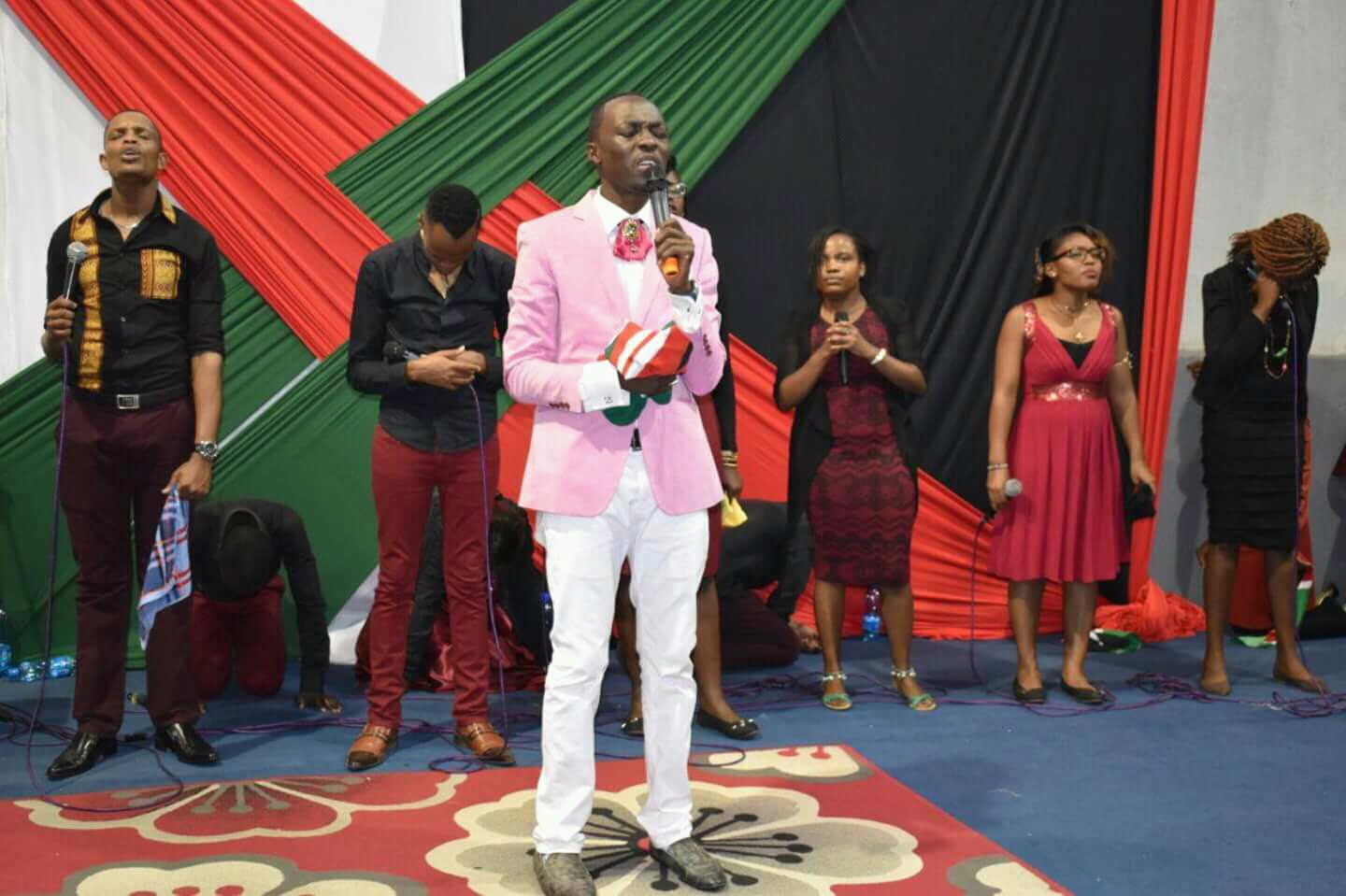 These Kenyan bitches keep spamming calls to radio talk-shows like Maina Kageni, or their Facebook pages like Kilimani Mum’s, how Kenyan men are “mean” , how we don’t know how to treat a woman right, how we don’t open doors, or pull out seats, how we don’t say sweet nothings, how we don’t pay for upkeep, how we are broke, and the likes.

Our seemingly perfect replacements according to these misguided Kenyan bitches have been West Africans, notably Nigerians who are strewn across this city, many inhabiting the periphery of Nairobi. Many of these Nigerians don’t even have legitimate jobs or even work-permits at that, and their main side-hustle is fake currency “wash wash” deals.

There is a perfectly good reason why societies like Ethiopians or Arabs have restrained their women from interacting and integrating with other cultures. Women in these societies are forbidden from open liaison with men from other countries. Women for many years were condemned to slavery and servitude not because of any bad reason, but so as to save them from themselves.

We saw Jimmy Wanjigi’s wife holding onto him, an image that must’ve hounded feminists of Nairobi who are constantly posturing of strength and independence, both which they can only dream of possessing. Because a woman’s strength is not in her solitude. And her value is never measured in terms of education and career. We look at other factors like child-bearing capacity. If you can’t deliver that, then you’re an incomplete woman.

And no community where this conflict of ideology plays out, than the Kikuyu’s. Historically, Kikuyu’s are ridiculed by other communities for being the quickest to embrace Christianity and submitting themselves to slavery, just as today their sycophancy is towards Uthamaki. Indeed, Kikuyu’s departed from their traditional ways and fully embraced Christianity, and committed themselves to slaving for the mzungu farmers.

You see as the white mzungu was stealing their most fertile of land, Kikuyu’s were busy praying and reading the bible. Kikuyu’s are the perfect examples of House Niggers. And when independence came, the land which had been stolen from Kikuyu’s was stolen by the elites who surrounded Jomo Kenyatta, forcing Kikuyu’s to immigrate to mostly Rift Valley, in search for land.

Now we are no longer in the Agricultural revolution, so land for growing subsistence crops. We are in the digital-age, so those historical-injustices will be overtaken by events, especially with urbanisation and the 3rd generation preferring to live in towns as opposed in Kuresoi and Moi’s Bridge. Even the farms which were acquired by the Kikuyu elites who stole what was originally communal land for the Kikuyu’s, are now being subdivided into real-estate.

Which automatically means that when foreigners like Nigerians raid this country in search for greener pastures, they will automatically be drawn to the weakest link. Caught in-between the conflicting messaging from their education, religion and mainstream media, and lacking strong family values, parenthood and cultural standing, it is Kikuyu Women who have proven easy prey for these shadowy characters.

Nigerians are lazy West Africans who have watched as their country was plundered by their leaders in conjunction with foreign oil companies, leaving them a poor, destitute lot who don’t even have a reliable electricity grid. In Kenya, they don’t really exert themselves in hard work or problem solving. They like working easy and hanging out at night in specific clubs, drinking Hennesy by the bottle and looking for loose women of means to fuck and scam money.

You gotta hand it to these fuckin Nigerians, because their ability to turn our noisy, confrontational, entitled, angry women into their beasts of burden is unrivalled. The same women who can never volunteer to pay a bill or buy a man a gift on his birthday, literally falls over themself to spoil the Nigerian man. They will finance, cook and fuck this man like there’s no tomorrow. From the noisy loud-mouth feminists that they’re conditioned to be, these Kenyan women turn into slaves of the Nigerian man. They will withold sex to their Kenyan men, but fuck these Eastlands-residing Nigerians anal. Those Naijos drill them in the diab.

Which is why I can never be with a Kenyan chic who’s been with a Nigerian. The stigma alone would kill me.

Media has for long conditioned Kenyan women to believe that anything foreign is good. Which is why they’d rather “keep” a Roysambu-based Nigerian in their apartment, instead of marrying a man with a ka-quarter acre in Syokimau. For as long as someone has an accent that isn’t Kenyan, he is good to go.

It is a twisted society that we have willingly enabled to degenerate from bad to worse. Which is why I’d advise any sane man to give a wide-berth to these broken women, because they’ll only diminish your productivity and project their failures on you. These are your typical single-mothers or the over-30 singles, who are always angry and bitter for no good reason.

Ciru Muriuki is perhaps the poster-child for fem-centric anger. See her social media outbursts and you can only sympathise with the emasculated man who has to endure the torture of sharing a bed with her every night. I imagine that he’s a thin, emaciated walking and talking shadow. The emasculation I can imagine almost has physical form.

There is no day you will log into social media and find uplifting messages posted to celebrate Kenyan men. However bullshit from frustrated feminist bitches rents the air every morning the good children of Yahweh log in. And for no fault of our own. Recently I logged in to see feminist bitches dictating how we should conduct ourselves during this No Shave November. Like do we tell them how to operate when they’re having their periods? What’s this obsession with women encroaching male spaces?

When do we draw a line on this excesses and power-grabs by feminist-mercenaries?

Anyways back to the original story, a lady posted on Buyer-Beware of how she’s been scammed by a Nigerian man, masquerading as a Pastor in Nairobi. The church has no physical address because it operates in different rented premises depending on the weekend.

As it is, we as Kenyans don’t trust mainstream clergy who have become status-quo bootlickers. Atleast the mainstream clergy is excercise some discretion when they’re embarking on their embezzling activities. But I’d never trust Cardinal Njue with my money, let alone a random Nigerian preacher.

For a woman to randomly meet a Nigerian preacher on Facebook, and then lend him 100+ thousand, only shows you the level of delusion with our Kenyan women. It is this lot that a man is supposed to rock-up with, and plan a family, yet they can easily be duped by some Nigerian to burn away their family savings.

Given between the vice of stupidity or alcoholism, I’d rather choose the latter. But our Kenyan women, are easily duped that it’s nauseating. 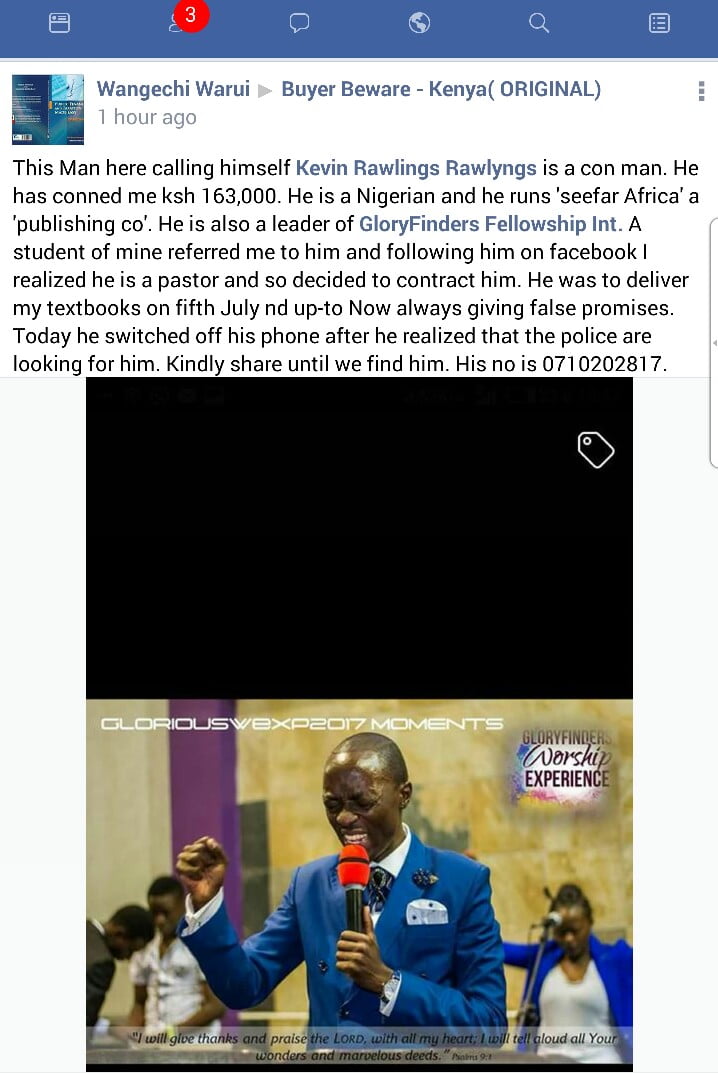 CAPTION: The story of Wangechi Warui being scammed by a Nigerian Pastor is disheartening. He most probably fucked her too!
Would you like to get published on this Popular Blog? You can now email Cyprian Nyakundi any breaking news, Exposes, story ideas, human interest articles or interesting videos on: [email protected] Videos and pictures can be sent to +254 710 280 973 on WhatsApp, Signal and Telegram.