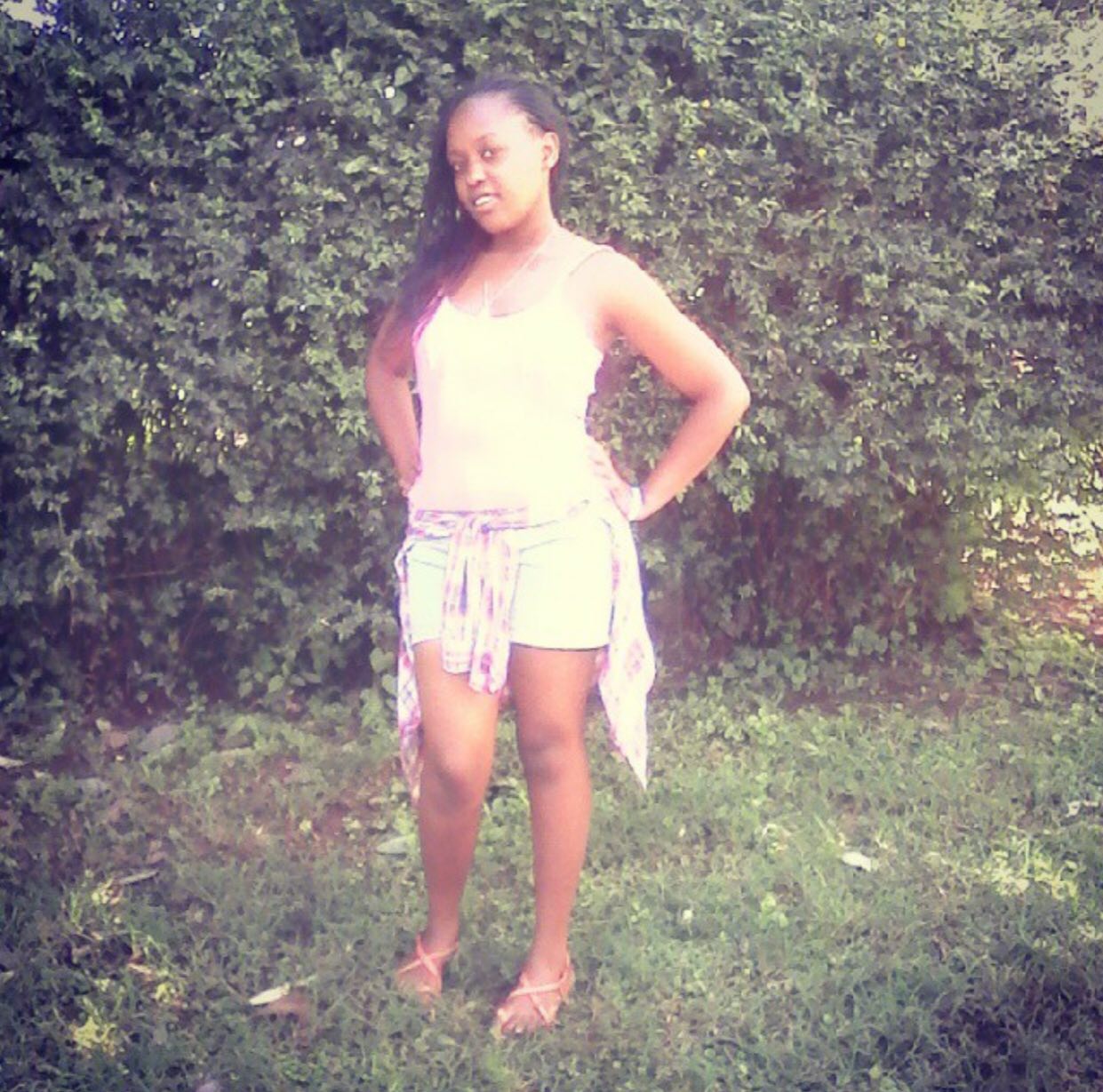 CAPTION: The 21-year old girl who was the side-chic to the late Chris Msando, assassinated last Saturday.

So, despite protests by feminists claiming that Caro Ngumbu was murdered elsewhere and body dumped in the same vicinity as Chris Msando’s, family members privy to the clandestine relationship have come out openly to confirm suspicions which we exclusively published based on meticulous piecing of events based on scanty details provided.

You see, it doesn’t take a neuro-surgeon to figure Kenyan women out! It’s like they all read from the same script. For instance, when Kenyan women are soliciting for MPesa from male acquaintances, the messages always start like “I’d like to ask for a favour” followed closely by a request of financial nature, with a promise of pay-back.

From the campus girl in KMTC to the corporate woman working for Nation Media Group as a star-columnist in their Saturdaymagazine, they all exhibits traces of whore-ish behaviour, thanks largely to feminist conditioning by their older peers.

According to this graph here below, we have a comparison of Sexual Market Value between men and women. While men bloom later in life, women’s sexual peak is capped at Age 23. Any woman above that age is a bad investment for any prospective male suitor as her capacity to reproduce/procreate diminishes as her biological clock ticks. You may be “Captain Save-A-Hoe” who embarks on the tedious exercise of trying to wife a woman above that age bracket, but all birth-related complications will be baggage to you, from financial to emotional.

A woman who has not given birth by age 27 is like a car which hasn’t been driven for 2 years. No matter what you do, it still needs to be serviced and probably overhauled. Even brand new cars in a showroom must be ignited and driven around everyday to ensure that their functions are still on point.

Since men’s Sexual Market Value generally peaks around 38, women needed a social convention that would also make their sexual peak coincide with men’s. Thus we read the endless articles about how old women “age like fine wine” or have a sexual libido which is more pronounced than that of the 22 year old ‘girl-child’ that we men manifestly prefer for sexual partners. Equalism enforces the delusion that if men are at their most desirable at later stages of life, then so too must be WOMEN.

It is the reason women like Sheila Mwanyigha, Kui Kamau, Debra Sanaipei, Emma Too, Caroline Mutoko, Bidanya Barasa, Eve De Souza, Carol Radull, Kalekye Mumo and the likes, held out on marriage. For all its efforts to convince women of a feminized redefining of Sexual Market Value, there are obvious cracks beginning to show in the social constructs designed to ensure a lasting feminine supremacy because women of the consecutive generations are only now beginning to realize the gravity of the “have-it-all” lie.

The real comedy is that this, well-past-the-Wall, 35+ y.o. woman, (who’s career and prosperity depend upon her maintaining her status as an aging spinster complaining about men’s inability to meet her delusional standards) is still planning out her idealized future happiness like a teenage girl after graduating high school.

She’s still plugged into the feminism model the soap-operas, Mills & Boon novels sold her in 1990’s – and even her same-age peers pity her protracted naiveté.

I once happened to have eavesdrop to a conversation of a few females (mid to late 20’s) that are already planning for 30 in case they end up finding themselves single & alone when they get there. What is the plan you say? Get pregnant and having a kid without a father/husband present in the picture! One of them even has a gay male friend who agreed to live with her and would help raise his progeny after having vitro fertilization. A near identical scenario to Caroline Mutoko’s. Which is why I keep telling you that her feminism is well thought-out.

The same slut would be horrified if a single man hired a surrogate and had a child (that too with his own money, rather than the money of male taxpayers, which is what most women use). The duplicity of feminism is nauseating.

Remember gentlemen, fertility, desirability, sexual availability and really overall potential for male arousal and attention reach an apex between 22 to 24 year of age. Remember this approximation isn’t an estimate of personal worth or character, or “inner beauty” as espoused by women who imagine they have so much value to bring to the table. Ladies, on average, this is your best year. I don’t think I’m relating anything the cold truth of your conscience hasn’t woke you up at night over.

To all young women, no other phase in your life will you enjoy more affirmation or legitimate male attention than this brief stretch. Once past the apex, every effort you spend on generating male arousal cues will be in trying to recapture the experiences of this phase. Every post-apex (18-23), pre-Wall (24 to 30) calorie you burn in the gym or weave you buy from Betty Kyalo’s salon, or diet you embark on from Fat Loss Lab, will be motivated by the memories of your Sexual Market Value peak. You’ll remember those days with nostalgia.

The age’s between 27 and 30 are subliminally the most stressful for women as the realization sinks in that they must trade their ‘party years’ short term mating protocol for a long term provisioning strategy at nailing someone who will marry and provide for them.

It’s at this point that rationalizations of ‘living a new life’ or ‘getting right with herself’ begin to formulate; not as a result of guilt per se, but rather as a function of relieving the anxieties associated with the new reality that she will eventually no longer be able to compete effectively in the market. I mean afterall, there are 21 year olds offering the same product that she has, only that it’s fresher, full of energy, theatrics, soundtracks and lesser financial burdens.

The one thing I’ve read somewhere that should be told to young men for over a decade is this: gain a social talent, don’t spend money on toys, save your cash and look for small local business niches to invest in. The few who have listened to me have skipped the nightmare of dating long term sleezy bitches, and have matured into confident and high value men.

The greatest part of being at the position Chris Msando was where he had money, a nice car, extra cash to throw around, is that the women who are subpar (or worse) scream and are now having epileptic fits whenever men go out with a younger, firmer, prettier, sexier girl instead of them, who imagine that they have so much to offer.

So in Kenya, we find ourselves due to toxic-feminism, chasing these old misguided women whose fertility is out of the question, while older “sponsors” chase campus and college-girls.

As men age, they will truly increase in their Sexual Market Value and it will be men who pick which women they want to include in their lives. Don’t let anyone or anything tell you differently.

Women (and society) are always ready to shame a man at a moments notice for anything that doesn’t seem to “fall in line” with the “status quo”. The shaming of men dating younger women, the strong support of older women (cougars) dating younger men, men (only) having the “mid life crisis” etc, etc…are all meant to keep men in line with that imperative.

There is a reason why so many older men in society are seen as attractive (by many women of all ages) as they age and not the reverse. Men increase in value because of their overall value in all departments (not just looks). Yes, you’ll have a few exceptions to the rule (far and few between) but this rule stands true.

Anyone trying to tell you differently is selling something.

Feminism tells women that being an “independent woman” is an admirable goal, but underneath the hard asses career girl EVERY woman is deathly afraid of dying alone. When they are no longer sexually viable enough to secure intimacy from a man, what do women do? They turn to cats. Gotta have SOMETHING to project their love onto (and imagine that it is being reciprocated).