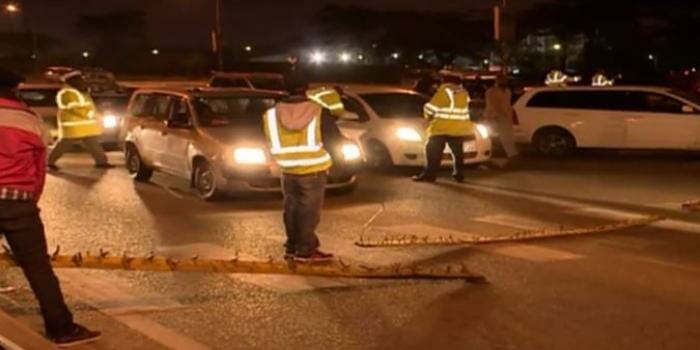 Caption: Alcoblow extortionists who rob drivers in-order for Lee Kinyanjui to take his malaya’s to Dubai.

We are in a really strange era. President Uhuru Kenyatta’s first assignments upon assuming office (after bribing Supreme Court Judges for a favourable ruling) was reactivating the Alcoblow law, where extortionist NTSA mount road-blocks enforcing only a selective component of their broad mandate.

The Alcoblow has really affected business as clubs have shut down in Nairobi, 24-hour supermarkets have now found it not necessary to open all night and jobs have been lost. This was coming from a so-called “young” president, who seems to have his mind in the gutter.

The irony of this enforcement is that President Uhuru Kenyatta is a functional alcoholic and a chain smoker. In public functions, Uhuru has to depart the Presidential dias every 20 minutes to puff and take a shot of something. Politicians who need favours like Mike Sonko know the best way to intercept the President is to wait for him at the exit, as he goes for his nicotine breaks.

In Sagana StateLodge, President Uhuru Kenyatta left the dias just when Polycarp Igathe had rose up to speak about reviving collapsed industries in the Mount Kenya region, leaving his audience baffled as to why he is out-of-touch with the plight of normal Kenyans.

Yet the same chain smoker and functional alcoholic was the first one to walk the moral high-ground, implementing a law that targets people who drink far less than he does, and which has had disastrous effects on a country that once aspired to be a 24-hour economy, all because NTSA wants to extort bribes from Kenyans to allow Lee Kinyanjui take his clande’s for holiday in Dubai.

Then move to Evans Kidero. The biggest thief that Kenya has ever seen immediately banned “prostitution” from the streets of Nairobi. Because he’s so clean and saintly, the ladies who largely plied their trade on Koinange Street once frequented by Jubilee Cabinet Secretary Mwangi Kiunjuri and Jubilee diplomat Chirau Ali Mwakwere, we ejected and asked to reform.

This has seen prostitution take a different form, as those whores now dress up like normal women, frequent the bars normal people do, and because of their perhaps greed for easy money, end up resorting to desperate measures like drugging patrons, pick-pocketing or simply pulling anti-social stunts like screaming and shouting.

Here is the thing Mr. Kidero, whores cannot be integrated with ordinary human beings. Whores need to be isolated and allowed to trade in their zones, as there exists serious discrepancies between the upbringing of a whore and a normal human being. These Jubilee experiments being tested by Uhuru and Kidero have been a big flop and we ask the two to reflect on their actions, and stop pretending like they’ll be the first to be admitted in heaven. 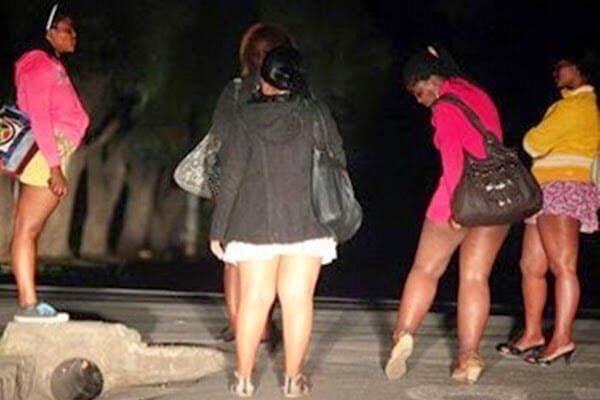 Caption: Ladies of the street who sanctimonious Kidero ejected. Prostitution has now taken different forms and is now mainstreamed, unlike yester-years when it was a niche business.

Whores are now college girls who operate in packs with a script to follow during a night out. There’s the beautiful girl who attracts all the attention, and then there is the mother-hen, who is the ugly caretaker with low self-esteem, who has to contend with being reduced to a watchman in exchange for a few drinks that will come her way. All these are the mutated forms of prostitution in today’s night-scene.

So did Evans Kidero’s order of getting rid of prositutes on Koinange Street reduce prostitution in Nairobi? Did Uhuru’s enforcement of Alcoblow reduce road-related deaths? Ofcourse not. These short-sighted and brainless interventions only worsened a dire situation, despite bribes distributed to mainstream media journalists to paint rosy pictures and spread false messages of hope and optimism.

Bribed journalists today are spreading news that the economy has grown between 5-6%, but who is feeling this growth? Because from what I know of, even Kikuyu’s and Kalenjins who form the bulk of Jubilee supporters are also suffering. No matter how much Jubilee bribes mediocre Daystar journalists to provide false forecasts claiming that the economy is growing, we know otherwise.

Again, we kindly ask employers to shun graduates from Daystar University because in the same way we see them lying to suit the status-quo be it Government of corrupt corporates, will also be the same way that they will lie in other workplaces. The curriculum being taught at Daystar is flawed, the calibre of journalism today is extremely mediocre and Daystar is at the heart of this sad state of affairs. Again employers, don’t employ Daystar graduates.

To the sanctimonious thieves like Uhuru and Kidero, we ask that you stop treating the country to sideshows and diversionary tactics. Execute your mandates, deliver pledges, create jobs and improve lives. But we doubt you will because it’s easier to bribe journalists to lie on your behalf instead.