Jamal Nassul Gadafi’s cold blood death is reported to have been as a result of stabbing by his lover Grace Kanamu Namulo, after a heated quarrel between the two.

CNYAKUNDI.COM has now received exclusive information on the tale of events before the two lovers turned on each other during a party in Mlolongo town.

It is reported that on Tuesday afternoon, Jamal and his lover Grace attended a party at the famous Arks Hotel in Mlolongo town. Witnesses say that the two started a quarrel just a few minutes to 6 p.m.

Since the hotel was very noisy from all the partying, the two decided to go to a quieter place and try and solve the dispute. That is when they walked to a nearby butchery which is allegedly owed by the couple. Little did he know that is where he would meet his death.

They proceeded to order meat and drinks and within a few minutes, the argument became very heated. Witnesses say their arrival at the butchery was a few minutes past 6 in the evening. 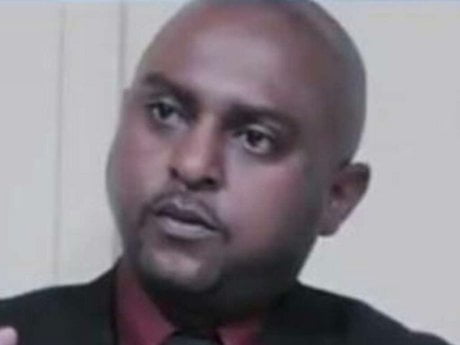 The argument quickly turned into a wrangle and before he knew it, Jamal had a knife deep inside his chest. A furious Grace had picked up one of the knives and did the unthinkable. According to the police, the killing happened at exactly 6:15 p.m.

With a knife driven into his chest, Jamal fell down on the ground. What followed were loud screams from Grace who could not believe what she had just done as she watched her lover profusely bleeding to death.

Her loud screams attracted the attention of the people who were left at the hotel and the party came to a premature end as they rushed to the crime scene.

The angry mob was ready to lynch her but the guards at the hotel came to her rescue and locked her up in one of the hotel rooms before officers from the Mlolongo Police Post came to pick her up.

What followed was Gadafi’s family arrival and they quickly rushed him to Shalom Hospital. With every ounce of blood he lost, Gadafi strayed further away from life, and by the time they got to the hospital, it was all over. Gadafi was pronounced dead.

Grace Namulo’s children are reported to have rushed to the scene and requested to see their mother before the police picked her up. The hotel guards allowed them in.

Grace was later transported to Mavoko Police Station where she wrote her statement and is currently being detained as investigations into Jamal’s death continue.