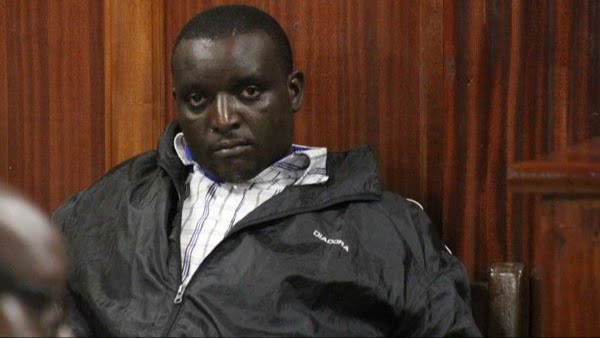 Former Ruaraka OCS Nahashon Mutua has this morning been sentenced to death for killing Martin Koome Imanyara, a miraa trader, inside the the Ruaraka Police Station cells in 2013.

Mr Koome was a businessman at Baba Dogo shopping centre in Nairobi who had been arrested after he attempted to jump off his storeyed house while carrying his three-month old baby.

After his wife screamed and called for help, neighbours rang up the police who then came and arrested a drunk Koome and took him to the Ruaraka Police Station where he would meet his death.

When they arrived at the station, Koome refused to get into the cells, insisting he had done nothing wrong that warranted his arrest.

Following the commotion at the police desk, OCS Nahashon Mutua would then intervene and beat up Martin Koome using what was described as a “ridged metal pipe” until he passed out. Koome would later succumb to the fatal injuries.

A human rights group picked up the matter and with the help of the Independent Police Oversight Authority, Nahashon was finally arrested and charged.

As the case was ongoing, it was revealed that Nahashon attempted bribing prosecutors in order to obstruct justice. One note reads that he offered them Ksh. 1 million at some point and even tried framing one of the suspects who were in the cells the day Koome was killed.

Despit waiting for close to six years, Koome’s family has finally found justice in one of the very first extrajudicial killing convictions in the country.