In the morning, mainstream media especially The Star reported that a lawyer had his hand chopped off because he wanted to rape a police officer. 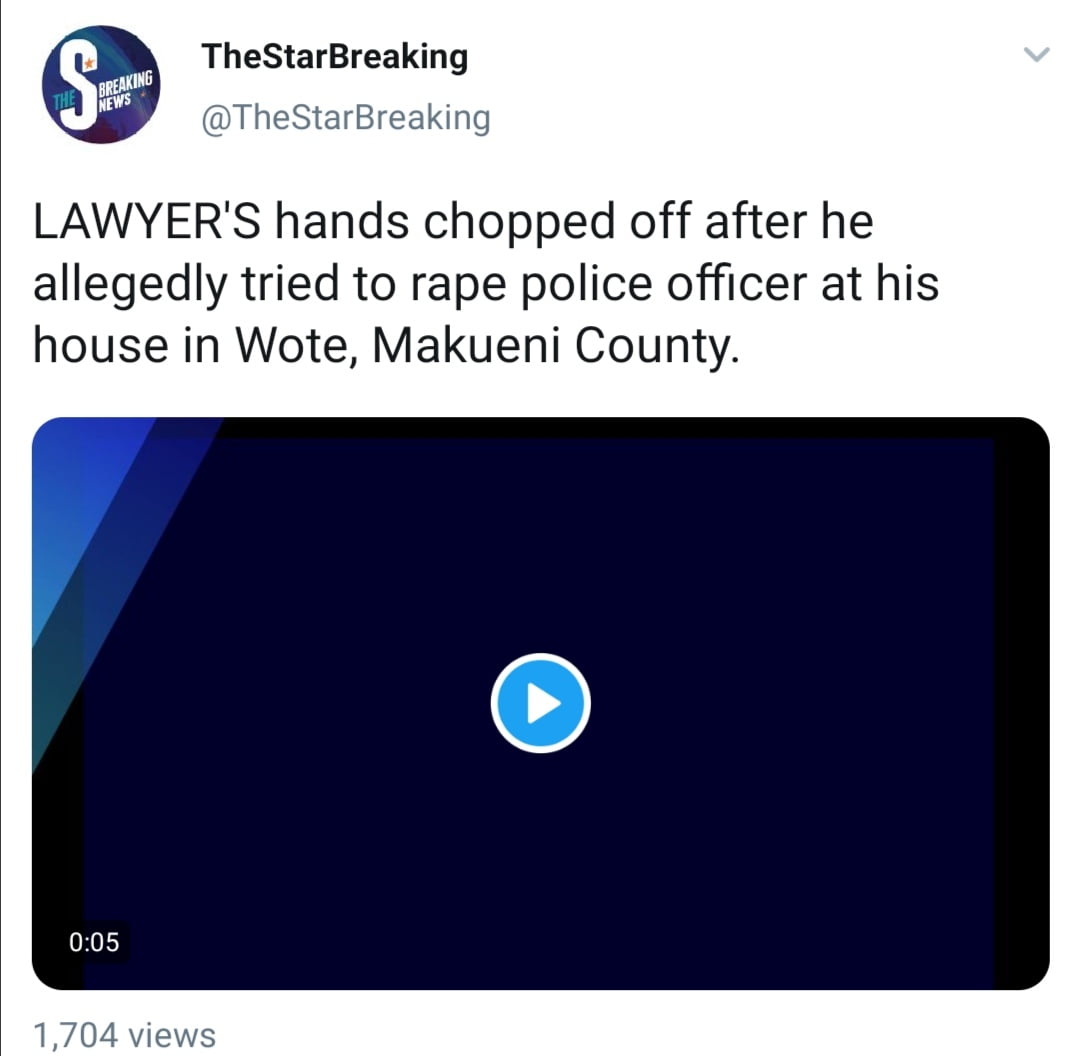 A screenshot of The Star breaking news.

As time went by, several accounts of the incident began to emerge online. Some of which were police occurrence book entries.

I share those below verbatim (including the typos, errors)

MAKUENI COUNTY MAKUENI SUB COUNTY MAKUENI POLICE STATION SUBJECT: INJURY TO A POLICE OFFICER. OB. NO.49/7/10/2020 AT 19.20 HRS. It was reported by No.118073 Pc(w) Nancy Njeri of Makueni Police Station that at around 1920 hrs she was invited by one Onesmus Masaku a lawyer within Makueni law courts to his house in Westlands area of Wote Township with an aim of introducing her to his would be wife. While in the said house ,the lawyer changed the story and demanded to have sex with her. She refused but the lawyer grabbed her and started forcing her to his bedroom. This prompted then to engage in a fight whereby the officer grabbed a panga and cut him on both hands before managing to escape. The officer sustained bite wounds on the right ear and on both hands at the fingers. She has been rescued and rushed to Makueni Referral Hospital where she has been treated and discharged while the assailant is currently receiving treatment at the same hospital in stable condition. Progress reports to follow

MAKIENI COUNTY
MAKUENI SUB COUNTY
MAKUENI POLICE STATION
SUBJECT: ARREST OF A POLICE OFFICER
Following a serious injury incident of one Onesmus Madaku a Lawyer at Makueni Law Courts by No. 118073 PC(W) Nancy Njeri, the officer has been arrested and will be arraigned in court with the offence of Attempted Murder(.) The victim was first admitted at Makueni Referral Hospital and later referred to Kenyatta National Hospital after his condition worsened(.) More report to follow (.)

*MAKUENI COUNTY*
*MAKUENI SUB COUNTY*
*MAKUENI POLICE STATION*
SUBJECT: INJURY TO A POLICE OFFICER/PROGRESS REPORT: AS PER THE PREVIOUS REPORT ON THE ABOVE SUBJECT CMM THE SCENE HAS BEEN REVISITED BY POLICE OFFICERS AND IT HAS BEEN ESTABLISHED THAT ONE ONESMUS MASAKU WAS SERIOUSLY INJURED BY NO. 118073 PC/W NANCY NJERI WITH A PANGA WHICH WAS RECOVERED FROM THE SCENE. THIS WAS EVIDENT BY THE STAINS OF BLOOD IN THE TABLE ROOM AND WALLS. ALSO RECOVERED WAS A BLACK BAG WITH THE FOLLOWING ITEMS:- 1. WATER HEATER (JUG) 2. TWO MOBILE PHONES 3. ONE SCISSORS 4. A SMALL DRESS WRAPPED WITH A PIECE OF NEWSPAPER AND 5. COOKING OIL IN A YELLOW PLASTIC BOTTLE. THE SAID ONESMUS MASAKU HAS BEEN TRANSFERRED TO KENYATTA NATIONAL HOSPITAL IN SERIOUS CONDITION FOR SPECIALISED TREATMENT. CASE P.U.I

The Law Society of Kenya to which the lawyer is a member has a different version altogether. According to the President of LSK Nelson Havi, the police are trying to cover up an attempted murder by a jilted lover.

“Police in Makueni are complicit in the attempted murder of Lawyer Onesmus Masaku by Policewoman Nancy Nyeri. The two are known lovers and Njeri attempted to kill him after he refused to accede to her demands for marriage. Nancy Njeri should be arrested and charged. ^POLSK”, Nelson Havi wrote. 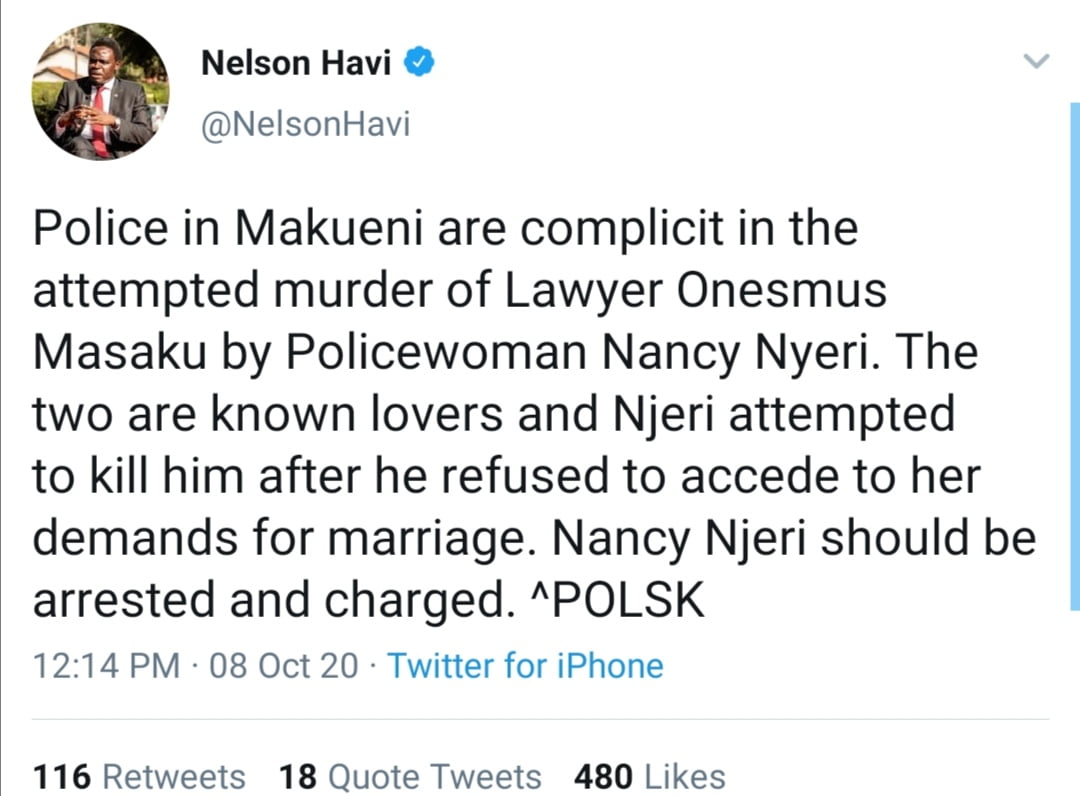 Where is the truth?

In this article:Lawyer, Makueni County