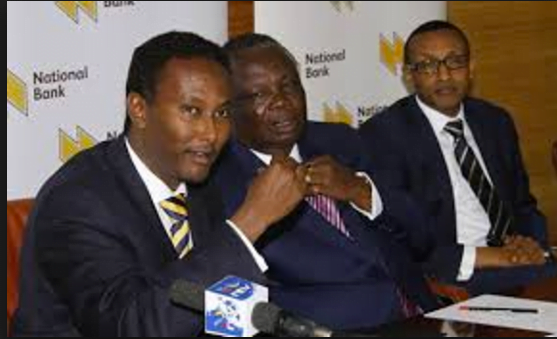 Caption: Mohammed Hassan Chairman of National Bank. He forged his ID and is an Australian passport holder. The sanctimonious Central Bank Governor Patrick Njoroge has been unable to force Hassan’s resignation, casting doubt on his overrated efficiency and commitment to clean up the banking sector.

Kenyans have recently been treated to a circus of events, accessorised by the Inspector General of Police Julius Bonnet, The Central Bank Governor Patrick Njoroge and Ethics Anti-Corruption Commission boss Halakhe Waqo. The incompetence of those three constitutional offices has seen a near-collapse of the banking sector, and they were left blaming bloggers for a rot that they themselves have overseen.

On focus is the recent case John Kungu Kiarie vs Dyer and Blair Investment Bank and Stannic Bank Kenya Limited. In perhaps the most outrageous of customer trust, greed and deceit, an innocent investor had his money defrauded by individuals and institutions that he trusted. He committed his hard-earned money to a bunch of crooks who had no good intentions with his cash.

The story is told of Mohammed Hassan, the current Chairman of National Bank who together with former CEO Munir Sheikh, Treasury CS Henry Rotich and Francis Atwoli has looted Kenya Government-owned National Bank to its knees, and the bank is now facing total collapse, with individuals withdrawing their money from the soon to be folding bank.

Another protagonist in the court-case is CFC-Stanbic Bank, known for colluding together with Central Bank officials in-order to manipulate foreign exchange rates especially with the US Dollar. CFC Stannic Bank, together with Kenya’s biggest banking crook Dr. James Mwangi thrive in hoarding dollars with a view to keeping the dollar rate up and rob Kenyans. The two banks are also behind the instability in South Sudan where trade in the South Sudan Pound is big business.

Rebels funded by Riek Machar receive money in Kenya from Western nations keen on capturing the vast oil reserves via Kenyan banks, who in-turn have to convert the money into SSP and the trade has been monopolised by Equity Bank and CFC-Stanbic Bank. These two banks are run by crooks of the highest order.

John Kungu Kiarie approached Dyer and Blair with Kshs. 100,000,000.00 (one hundred million) to invest in various stocks and securities. CFC-Stanbic Bank was the holding bank for Dyer and Blair which is not a commercial bank. Fingered in the ruling, the then General Manager of Dyer and Blair Mohammed Hassan connived their way into lying about a non-existent court order freezing the account that held the money by Mr. Kiarie. 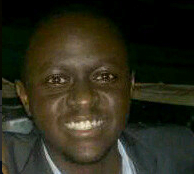 Kevin Kilach (pictured above) a senior manager at CFC Stanbic is the one who initially lied to the court in a bogus affidavit claiming that there was an order freezing the bank account, but after being challenged by the court to produce it, he recanted his evidence and indeed admitted that it never existed. Such are the corporate crooks that operate in Nairobi. Pathological liars and psychopaths who thrive on bribing journalists to manipulate perceptions and opinions.

During the period 28th April 2003 and 2008, Dyer and Blair illegally withheld John Kungu Kiarie money, in conjunction with corrupt Central Bank officials and CFC-Stanbic by faking a freeze-order and hoodwinking Kiarie that his money was inaccessible. Rafiki Deposit Taking Microfinance is also employing the same tactic of withholding clients deposits in breach of Central Bank and even the Constitution, and we are now calling on depositors to file a class action suit against Rafiki DTM for capping their withdrawals.

We now turn our focus on Mohammed Hassan, current Chairman of National Bank of Kenya. Before we even proceed, Mohammed Hassan has a fake Kenyan ID and is an Australian citizen with an Australian passport. Everything else has been purchased in Kenya through corrupt immigration officials like Machel Waikenda’s mother, whom President Uhuru Kenyatta appointed to a plum posting in Algeria, despite investigations against her over illegal issuance of work-permits and passports by the EACC.

Mohammed Hassan has a myriad of cases with accusations on every economic crime on the land, including money-laundering, extortion, corruption and fraud. How then can the Central Bank Governor look Kenyans straight in the eye and convince us that he is in control yet Mohammed Hassan is still the Chairman of National Bank? Give us a break Mr. Opus Dei. We are fatigued by Jubilee liars.

Mohammed Hassan, a known money-launderer of Leader of Majority Business Aden Duale who is his chief defender to President Uhuru Kenyatta, has been involved in a scandal where 115,000 acres of land in Kwale was sold to BlueBird Aviation shareholders and seeking to defraud the company’s shareholders who took him to court.

Mohammed Hassan is also the main shareholder of Hass Petroleum that has recently embarked on a countrywide expansion using the over Kshs, 30 Billion he has embezzled from National Bank of Kenya. It is such an insult to Kenyans that Mohammed Hassan continues to serve as Chairman of National Bank and still walks scot free, inspite of the economic crimes he has committed in Kenya.

Here is a man whom a Kenyan court has concluded that he illegally withheld a client’s finances so as to use the money and trade for his company’s benefit. He signed the agreement in his capacity as General Manager of Dyer and Blair Bank and abused the trust extended to him, manipulated the system, forged a freeze-order and roped in CFC Stannic officials led by Kevin Kilach, so as to execute this white-collar heist.

We continue opening Kenyans eyes on the level of corporate rot in Nairobi, and many of these fundamentals and statistics that are regurgitated in the media, are fake and based on lies. Many corporates in Nairobi forge documents, manipulate books and bribe journalists to present to the public a facade of success, which is about to come tumbling down like a house built on quick-sand.

Again, we inform individuals to be wary of business journalists, all of whom live beyond their means due to bribes from corporates and PR firms, and the more you watch Kenyan news, the dumber and gullible you will get.

If Central Bank Governor Patrick Njoroge cannot call for the resignation of Mohammed Hassan, If EACC Boss Halakhe Waqo cannot pursue the prosecution of Mohammed Hassan on various counts of economic crimes because they’re from the same community, then Kenyans have no business trusting reports that the banking sector is safe and stable.

Kenyans don’t trust the fake statements from Patrick Njoroge who has declined to meet opposition leader over the Eurobond heist where President Uhuru Kenyatta and Deputy William Ruto want to make away with Kshs. 100 Billion, a matter that has been highlighted by American public broadcaster PBS.

Kenyans have lost faith and trust in Central Bank Governor Patrick Njoroge, especially because he is being praised everyday by journalists like Wallace Kantai and the usual suspects of moles Ory Okolloh and Boniface Mwangi. The establishment doesn’t praise for nothing.