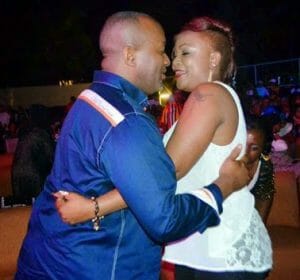 Taita Taveta Women Representative, Joyce Lay, has gone through hell to be where she is today. The beautiful Women Rep, who has a killer figure and juicy derriere, was b0rn in a small village in Mwatate and grew up in abject poverty.

While speaking in a recent media interview, Joyce revealed how she once attempted suicide after she was impregnated at only 19. This forced her out of school and months after giving birth, her son died.

Her tribulations continued later in life when she got married to her white husband, William Lay, who is now seeking a divorce over what he is calling ‘irreconcilable differences’.

“My husband stood by me even when I was an embarrassment. He was by me when we couldn’t even enjoy conjugal rights and through a second surgery to remove my uterus.” She added.

Due to her health complications, Joyce cannot give birth but it’s not clear why William has decided to divorce her after going through hell together.