As the Kenya
Certificate of Primary Education (KCPE) results were being released on Monday,
candidates and their parents were anxious to find out what they had scored.

The reward
for eight years of hard work and investments left interested parties at the
edge of their seats.

Conveniently, the Kenya National Examinations Council (KNEC) provided an SMS code where parents/pupils could find out the results in realtime. With their minds fixated on their loved ones, top candidates, top schools and interesting developments, one thing escaped the attention of most Kenyans; they were being ripped off through the shortcode.

Take a minute do the maths; Kenyans were being charged Ksh25 to access the results via SMS.  Shortcode 20076 was the number. Kenyans swarmed it like bees punching in index numbers and hitting the send button.

A total of 1,083,456 pupils sat the exam meaning and at least two people sent the index number of each candidate for them to get the results.

A spot-check by Business Today shows that most people who sent the text said that they did not get the results on the first trial and got them on the second (spending Ksh50) or third attempt (Ksh75).

That would translate conservatively to Ksh50 for every candidate.

Make no mistake about it. Two texts are the average number sent for each pupil but it is very likely that there are families that sent three to five texts possibly more anxious to find out the results of their loved ones in different locations.

Multiply Ksh50
and the number of candidates who sat the exam you will get Ksh54.17 million
(Ksh54,172,800) and the conclusion that someone seated somewhere was laughing
all the way to the bank will race through your mind instantly.

If you subtract the standard charges levied by service providers Ksh5 times the number of candidates your math will come to Ksh5.4 million (Ksh5,417,280).

Now minus the
revenue generated by charging all the people who sent the text and the standard
charges and you will get the figure Ksh48.75 million (Ksh48,755,520).

Not bad for one hour’s work, huh?

Factor in this: primary education is supposed to be free and before the introduction of the SMS code, candidates still got their results by fetching them at their learning institution – free of charge.

The government has never accounted for this money. Whoever pockets the cool Ksh48 million is anyone’s guess.

Taking
advantage of candidates, parents and guardians anxiety to make a killing goes
to show how far greed by those in high positions in government have convoluted
the system to keep feeding their money lust.

As the
country grapples with theft of public resources which has been christened corruption
in efforts to normalise the vice, KNEC’s SMS platform is another form albeit carefully
thought through and unleashed when the minds of Kenyans are distracted by the
results’ release.

Kenya’s national examinations results are waited for with bated breath as pupils, students and parents are anxious to know how they fared.

With this
comes the demand to know what each scored and thus comes the rush for the numbers,
the marks and positions.

KNEC has for
the past few years been utilising technology to avail these results but it
seems that the move is to profit the body at the expense of these pupils, students
and parents.

With the
exorbitant charges on SMSes, it seems that KNEC has found a money minting
system which earns them millions in a few minutes yet, this money is not
accounted for.

On the
company’s website, there are no audit reports showing where these millions go
neither is there a tender document showing how the SMS service was procured.

Since the
time Dr Fred Matiang’i was the Education CS, the timelines for the release of
these results has taken notably shorter times than was before.

Previously,
KNEC would hoard the KCPE results until after Christmas and up to early March
of the following year for KSCE students.

With technology, however, there is no need to do this as the exams are marked and graded faster, too.

For the
results to get to the recipient, they either have to use SMS- which a majority
of Kenyans do since they do not have access to the other option- login online.
On the KNEC portal, students enter their exam credentials after which they are then
issued their results.

While this is a cheaper option for those who would expect real-time issuance of the results, the system fails severally until a day or so after meaning that many have to resort to the money-minting SMS system. 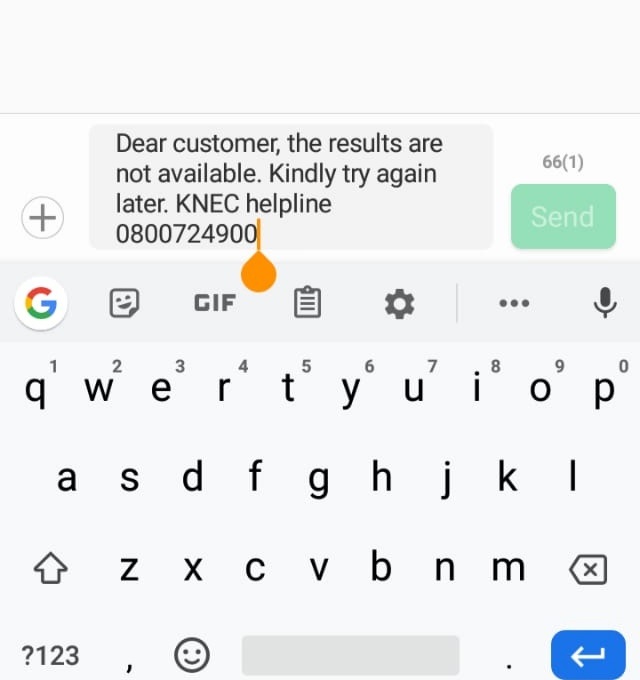 KNEC makes a
cool Ksh 48 million assuming that each pupil’s parent tried to get the results
twice. In the case of both parents trying, this doubles the earnings for KNEC. The
reality, though, is that many parents will send a series of requests-all
billed- until they get the results.

From this, it is then possible that KNEC is making anything close to Ksh200 million (conservatively).

These
millions that the examinations council is milking from Kenyans is, however, not
unaccounted for. At least not in the public domain.

The money is
not declared as an income for the council and the Ministry of education funds the
council.

So, where does this money go? Are there projects that it funds? Does it help pay salaries or is it being invested by the council in any form like bonds?

Read >> Ordinary Kenyan Secondary Schools Among the Top 100 in Africa