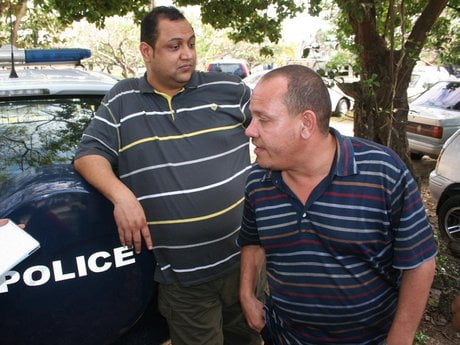 According to the Standard

When the chips were down, the Akasha brothers had nothing left to hold onto apart from honour and trust.

At the very least, when they were extradited to the US to face charges of orchestrating an international narcotics conspiracy, they knew these two qualities, a requirement in their murky world, would count for something.

In their minds, the bond that the two Akashas — Ibrahim and Bakhtash — had, together with their co-accused Gulam Hussein, Vijaygiri Anandgiri Goswami and Muhamad Asif Hafeez was enough to see them weather through whatever storm the United States Drugs Enforcement Agency would throw their way.

After all, they had been through similar situations before. Each time, connections with Kenya’s political class, drug money and the corruptibility of state officers formed an unholy trinity that ensured they got away with only a slap on their wrists.

Unluckily for and unknown to them, these two values no longer held any currency in their little circle of thieves. The minute the plane that took them across the Atlantic touched down in New York on February 1, 2017 one of their own would break the rule of Omerta. As he went down the plane’s steps into the waiting arms of US Air Marshalls, he had already decided that silence was no longer an option. And the selfishness that drives the raw ambition of the drug lords worldwide kicked in.

Goswami knew he had to look out for number one. He turned into a cooperating witness, effectively throwing the two brothers who had ambitions of keeping the Akasha name forever in folklore, under the bus.

But what could have turned Goswami, a man who had been with the Akashas through their most difficult of years? A man who had admitted to the US court to having contracted a killer on behalf of the brothers to knock off an acquaintance?

A dig into Goswami’s past reveals the story of a man neck high in crime. Investigating agencies did not need to lean too hard on him.

At the height of his notoriety, Goswami had a large network of mules that straddled various countries. A 2016 investigation by Indian newspaper Indian Express said the man, popularly known as Vicky, never skipped an opportunity to use this ephedrine to cook meth (methamphetamine), also known as crystal, and supply it to various countries including the US.

With money coming in thick and fast, and addicted to the high life, he set out to build a business empire, dabbling in hospitality and aviation. Living the life of a movie star. Eventually, his business ambitions outgrew the borders of India.

“Goswami started supplying drugs in Ahmedabad till he eventually moved to Africa, from where he started operating the drug empire,” the Indian Express reported.

Goswami was one of 15 siblings born to a retired deputy superintendent police.

But soon, his past caught up with him, landing him a 25-year-sentence in a Dubai Prison. Goswami though is a quick learner. He was to convert to Islam in a bid for leniency from the Dubai authorities. His sentence was commuted to 10 years. His hiatus from the scene did not teach him new tricks.

No sooner had he been released than he went back to what he knew best. This time, Kenya was his base. Mombasa his preferred city. His choice of partners was rather obvious. He was a man who moved volumes, how best to do this than collaborate with the biggest family name in the business?

With this, the Akasha connection was established and together they recruited more and dreamt up a revival of the old trade routes the original Akasha, Ibrahim, controlled. And together, the US says, they conspired to and supplied copious amounts of an assortment of drugs to America.

In October 2014, Goswami was arrested along with the Akasha brothers, Ibrahim and Bakhtash, by the local anti-narcotics unit in Kenya with assistance from the US DEA. They were charged with conspiracy to traffic narcotic drugs to the US and in Kenya.

In various interviews in his home country, Goswami denied involvement in drug cartels and claimed to be “doing hundreds of things like coal mining and businesses related to raw gold”, the Indian Express reports.

All the five pleaded not guilty on May 1 2018. On Wednesday, the Akashas, however, changed plea to guilty. Individuals close to the case told media Goswami’s cooperation with US Department of Justice as the main reason for this change.

Now, probation reports for the brothers will play a big role in their sentencing. This pre-sentence investigation document to be prepared by the probation officer is set to dig into their past criminal record, age, circumstances under which the crimes they pleaded guilty to were committed and whether they genuinely feel remorse.

Judge Katharine H Parker of the Southern New York District Court issued the order on Wednesday for the document to assist the court in determining the duo’s sentencing, moments after the convicts pleaded guilty to seven counts.

The charges that carry a minimum sentence of 10 years in prison and a maximum sentence of life included distribution of heroin and methamphetamine and conspiracy to import drugs in the US.

The plea of guilty came barely 24 hours after the court’s presiding judge, Justice Victor Marrero allowed in part an application by the US government that sought orders allowing admission of certain evidence related to uncharged drug trafficking and acts of violence by the Akashas.

The US government also wanted the two brothers stopped from discussing or offering evidence relating to their extradition from Kenya.  Once their case comes to an end, the Akashas will have to surrender to the prosecution all the material evidence submitted to them by the US government and never to share the details with third parties.