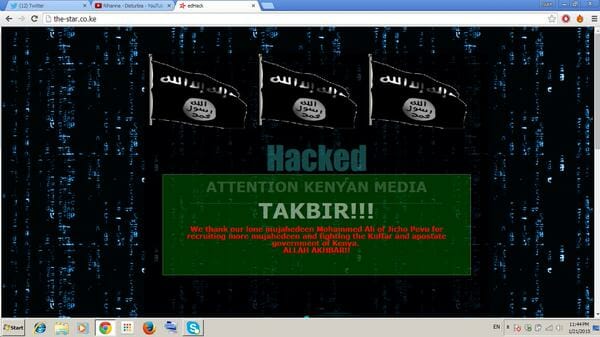 The internet is becoming very powerful. Most people depend on social media and online blogs to get news before they hit the headlines. Well, The Star Newspaper was hacked yesterday causing a lot of panic due to the information they posted.

The star newspaper – That usually brags to have exclusive news has always been on the receiving end especially from Kenyans on Twitter. Numerous accusations have always been lodged against them. 6 days ago, media council of Kenya summoned the star newspaper top editors after numerous complaints  that the publication has been publishing fake stories.

So when these fellas were hacked, I noticed something strange. I didnt join the bandwagon that was making some serious allegations and conclusions because I usually go with facts. Apparently, After hacking the website, the ” Hackers ” a damning message implicating Mohammed Ali as an extremist referring to him as a Mujahideen – Jihadist . Here is how the Website looked like

According to people who understand the message, this is what was posted

According to sources, some people within government are trying to tarnish Moha’s Image by depicting him as a terrorist sympathizer.Let the drama unfold

The question that arises is, Why did the Star give by letting the Digital spanner boys use them as propaganda tool ? In fact this was not a hack  at all , any basic IT guy can do that and post the message. Just give me your login details and I can put a message like that saying Blah …Blah is a thief .  The star is becoming very controversial . Now we would like to know the amount of money they were paid to post the message attacking Mohammed Ali