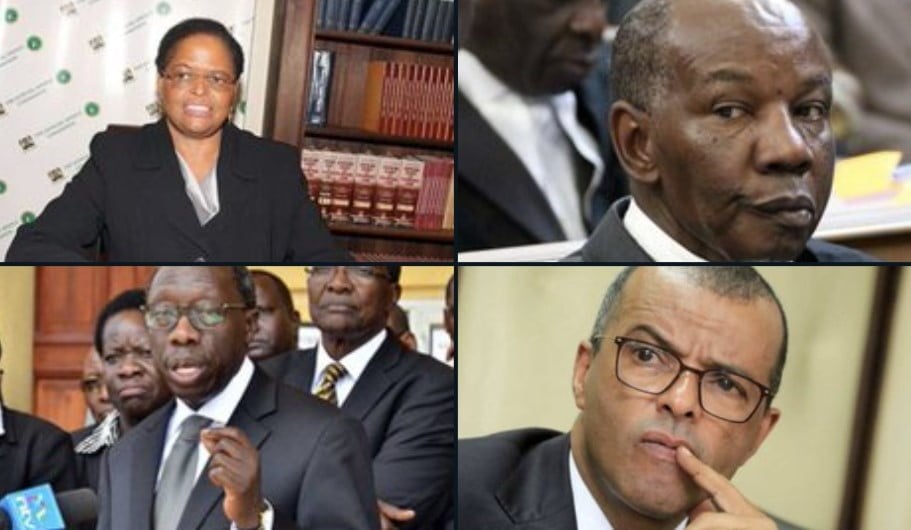 In a rather unprecedented turn of events, the Judicial Service Commission on Wednesday evening released a list of applicants for the vacant office of the Chief Justice, in which all members of the current Supreme Court bench have kept off the race to replace Retired Chief Justice David Maraga.

In fact, not even the acting Chief Justice Lady Justice Philomena Mbete Mwilu applied to be considered for the position.

According to JSC, the likes of Justice Mohamed Khadhar Ibrahim and Justice Dr Smokin Wanjala did not send applications for the vacant position and neither had Lady Justice Njoki Susanna Ndung’u nor Justice Isaac Lenaola by the time the commission closed the submission of applications.

Further, it was disclosed that only 13 individuals, some of them including former Director of Public Prosecutions Philip Kipchirchir Murgor and renowned court of appeal judge Lady Justice Martha Koome, showed an interest in succeeding David Maraga.

Fredrick Ngatia, one of President Uhuru Kenyatta’s personal lawyers, is among applicants for the position.

Joining other Kenyans in reacting to the list of candidates, Senior Counsel Ahmednasir Abdullahi took to his heavily followed Twitter account and posted a screengrab of the statement, and without necessarily pointing out which ones exactly, used the caption “Some GREAT candidates, some AVERAGE candidates and a few DISASTERS…”

Some GREAT candidates, some AVERAGE candidates and a few DISASTERS… pic.twitter.com/7ptWIgiUux

“The next CJ is going to be an “unknown” & basically a puppet,” opined one netizen.

No judge of the Supreme Court applied for the position of Chief Justice. What does this mean? Even Philomena Mwilu, did not. Those who though Njoki Ndung'u would apply, she didn't. Mumbi Ngugi, did not. 😭. The next CJ is going to be an "unknown" & basically a puppet 🤔.

Keep an eye on Justice William Ouko, Justice Martha Koome & Philip Murgor. One of the three will be the next Chief Justice of Kenya. pic.twitter.com/POmJtz9MHx

Subsequently, the commission will now proceed to shortlist and publicise the list within 14 days as provided in the First Schedule of the Judicial Service Act.

Out of the 13 names of applicants for the position of Chief Justice, who do you think will have it? Let us know in the comments section.

Meanwhile, check out what other tweeps had to say on the list.

They know why.Kenya is not a country that believes in the rule of law.They don’t want to appear before JSC for formality when the executive has already given direction on who should be the next CJ.

I see people placing double chances. I think the next CJ will be Ngatia/Koome/Ouko, Supreme Court Judge will either be Kathurima/Marete/Nyaberi.

Murgor could not handle the Odpp until he voluntarily resigned, how now is he capable of being the CJ?