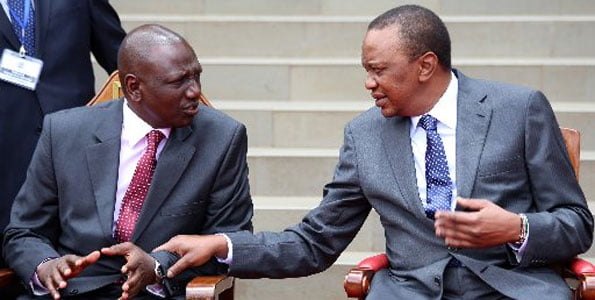 Since 1979, Kenya has paid billions of dollars allocated every financial year for a non-existent fertilizer factory by the name of Ken-Ren, a move which if had been seen to its logical conclusion, would have made Kenya self-reliant on fertilizer, and perhaps a regional exporter of the same commodity.

But the stupidity from the Kenyatta, to the Moi, to the Kibaki and now to the Uhuru regimes is now rife more than ever. Long-term prospects of the country are being compromised by myopic, hopelessly visionless and greedy imbeciles working for Uhuru, whose main objective is to loot money so as to build flats and malls in a bid to “secure” a bright future for their children.

All the money that is being stolen by Jubilee officials is being routed through real-estate agencies such as Knight Frank, Hass Consult and Cytonn Investments who have until recently been active in releasing fake reports about the viability of kenya’s housing/land sectors, showing it as the most promising and prospective investment in the country.

The reports are then dispatched to the public via a barrage of Bribed mainstream media journalists who hype land/real-estate as the only investment worth returns. Reality is that the average property in Kenya and Nairobi in particular has a valuation premium in excess of 30%. A price correction or crash will happen at some point and it shall be very painful.
A mortgage of Kshs. 15 Million has monthly repayments of about 200k over 15 years at 16% interest! What it can buy you, can’t fetch half of that in rent a month. Clearly a very poor investment choice.

Because in Kenya, people especially the 8-4-4 educated lot don’t use their thick heads to analyse situations. They simply go with euphoria. For instance, why do individuals buy rural land at for instance Thika Greens or Property Reality Inc., projects in Namanga, Nanyuki, etc at the Nairobi prices? Just because Maina Kageni told you so? Yenyewe middle-class Kenyans are real pieces of shit. You’re all such a bunch of idiots, easily manipulated by corrupt mainstream media journalists.

For instance, the Jubilee machinery is preparing to hype an Eldorent fertilizer manufacturing plant. Read deeper and realise that there’s no manufacturing involved. It will be a blending factory that will unfortunately put players/importers like MEA Fertilizers and Tropical Farm Management out of business.

This follows the completion of the construction of the US$ 1.2 Billion fertilizer manufacturing plant at Eldoret. The project was initiated when the Kenya government invited bids to carry out a feasibility study on the potential to set up such a plant in either in the country or within the region to manufacture fertilizer and NOT TO BLEND already imported manufactured fertilizer. 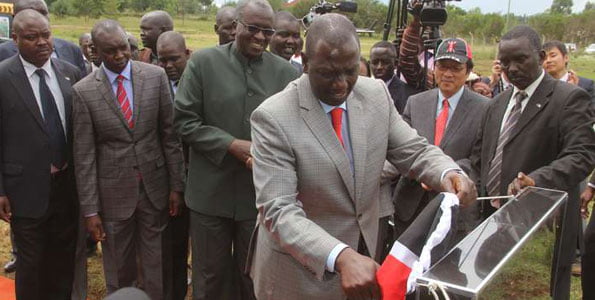 Caption: Deputy President William Ruto at the launch of the “fertilizer factory” project last September. The project is a white elephant project that will be used to loot poor Kenyans money.

Through the ministry of Agriculture, the Government wanted to establish whether it is commercially viable to set up a fertilizer manufacturing plant in Kenya (which is currently the largest fertilizer market in the region) while the raw materials are in found in large quantities in Tanzania and Uganda due to the availability of confirmed oil and natural gas deposits. The study was to establish the quantities of basic raw materials available and their locations. In addition, the study was also to proof the sustainability of the plant as well as its costs in terms of infrastructure and support services. The study was further expected come up with the proposed types of fertilizers to be manufactured and their prices as price was taken as the main constraint to the attainment of food security in the country.

However, the plant will not completely solve the problem unless we address where the core costs are coming from. The problem leading to high fertilizer prices for the farmer in the country is what the plant feasibility study was to investigate and address once the feasibility study was through. The Kenyan fertilizer industry that includes fertilizer pricing and marketing was liberalized in1990. The rapid devaluation of the shilling had resulted in high domestic prices of fertilizers. The average price of a government subsidized 50-kilogramme bag of fertilizer was Ksh. 2,000. With the market one going at ksh 4,500 and consumption is about 600,000 metric tonnes annually.

The raw materials for manufacturing fertilizers include Nitrogen, Phosphorous and Potassium. However, Kenya is not endowed with raw materials for fertilizer manufacture except material such as limestone and soapstone. It is believed that there are Rock Phosphate deposits at Rangwe hills, Mrima Hills and Busia. We do not know what quantities for purposes of manufacture the feasibility study ascertained. In this connection, five aspects of the fertilizer plant were to be examined and analyzed:

(iii) The sources and level of revenue likely to be generated by the fertilizer plant,

(v) Funding arrangements and mode of design, construction, operation and maintenance of the plant and finally, whether it was to be constructed using European Union fertilizer Manufacturers Association’s Best Available Technologies.

After the Feasibility study report was out, an independent appraisal by a different consultant of the feasibility study report was to be undertaken to interrogate the report and establish its correctness and viability. Similarly, the project ought to have been implemented at least as a regional plant for fertilizer markets in Kenya, Uganda, Tanzania, Southern Sudan, Burundi, DRC and Rwanda as the Kenyan market is too small for any viable fertilizer plant.

Currently, Kenya imports virtually all its fertilizers except about 10,000 tonnes fertilizer per annum of single superphosphate (SSP/TSP) manufactured using sulphuric acid at the KEL chemicals Limited factory based at Thika district and MEA Ltd, based in Nakuru which imports manufactured fertilizers and blends them into various NPK grades. The main key raw material and intermediates that go into the manufacture of one or more of the above fertilizer products and which are internationally traded include phosphate rock sculpture, natural gas or naphtha, liquefied natural gas (LNG), heavy fuel oil, liquefied petroleum gas (LPG), anhydrous ammonia (NH3), sulphuric acid, and wet process phosphoric acid. Natural gas, heavy fuel oil and liquefied petroleum gas (LPG) are important alternative feedstocks for anhydrous ammonia (NH3). NH3 in turn is the basic ingredient for products such as AS, AN, CAN and DAP while phosphate rock, sulphur, sulphuric acid and phosphoric acid are essential materials for phosphate products such as TSP and DAP Thus for any country or a region that would like to produce its own fertilizers, the alternative approaches to developing an indigenous fertilizer factory depends on whether it has one or more of the above raw materials within its borders as summarized below:

(iv) Sulphur (in one form or another)

Kenya is not known to have to have any of these four raw materials and surplus cheap electricity, thus denying us the opportunities of establishing a low cost fertilizer manufacturing plant in the country. The industry experts have never been presented with the feasibility study report and the independent appraisal of the feasibility to know the parameters used for establishment of the plant in Eldoret. Worse still, is that there are many types of fertilizers used in Kenya. And is not known the type to be manufactured by the Eldoret plant. Will it be another white elephant?

Moreover, it not a fertilizer manufacturing plant but a blending plant where the same fertilizers are imported and blended. The worst mistake is that the Jubilee government has now totally killed the private sector fertilizer industry in the country, with many players becoming paupers. Which of the fertilizers used in Kenya shall be manufactured by the Eldoret plant?

The Contributor Of The Fertilizer Analysis is an expert in the industry.