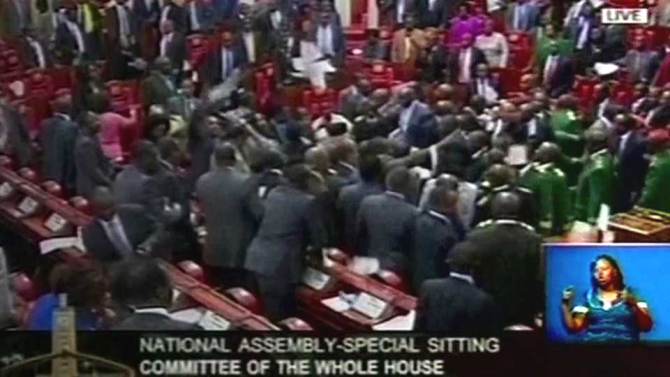 It can only happen in politics: a grown man, indeed a grandfather, being attacked by a woman young to be his daughter and emerging out with bare buttocks. The grandfather was Senator Johnson Muthama and the lady, MP Alice Ng’ang’a; and the battleground was the supposedly hallowed presincts of parliament where MPs decided to convert the speaker’s gallery into a gladiators’ ring.
Sources within Jubilee revealed that Muthama was lucky since the initial plan was to strip him stark naked and parade him in front of both local and international media for being the “biggest thorn on Jubilee government”.
Jubilee supporters are said to be bitter with Muthama for having been on the forefront in unrelenting scathing attacks against President Uhuru Kenyatta’s regime, openly spewing venom at the Jubilee government, claiming it is corrupt and lacks ideological template to move the country forward.
It all started when senators Moses Wetang’ula, James Orengo, Bonnie Khalwale, Muthama and Janet Ong’era pitched tent at the speaker’s gallery. They started cheering as Cord MPs voiced their concern over the contentious Security Laws Amendment Bill which has since been signed into law by the president.
As the shouting continued, Suba MP John Mbadi crossed to the government side, grabbed copy of the order paper from Asman Kamama and smashed it to the ground before following it and shredding it into smithereens. Deputy Speaker Joyce Laboso who was in the chair could be overheard frantically calling on orderlies to call the speaker Justin Muturi.
As other MPs joined Mbadi on the floor with their order paper copies flying all over, the senators were singing “bado mapambano” (struggle continues). Speaker  Muturi by now in the chair ordered that they to be ejected out of the house but the sergeant-at-arms was no match for the senators and the speaker’s orders fell on deaf ears. It was thus that Jubilee legislators transformed themselves into sergeants-at-arms and climbed up to the gallery with fists clenched but their disadvantage was that they were in suits and ties while Muthama’s brigade was in casual wear.
The Jubilee hit squad had Onesmus Ngunjiri of Bahati, David Gikaria (Nakuru Town East), Onesmus Muthoni (Chuka Igamba), Ng’ang’a (Thika Town), James Gakuya (Embakasi North) and David Kiuna (Molo). Kajiado North Moses Ole Sakuda was also in the group of molesters and it is said he suddenly became a lion and mauled at MP Simba Arati nipping a finger. Arati had gone to rescue Bonnie Khalwale who was about to be tossed to the chamber six metres below.
Fearing for his safety and health, the MP is said to have gone for an urgent HIV test since he could not take anything for granted and for fear that the biter had bleeding dental system. It has emerged the Jubilee MPs had each earmarked an opponent to take on as they went up. Ng’ang’a, a mother of one who has been closely associated with a leading parastatal boss was to checkmate Senator Janet Ong’era, a nominated Cord senator.
Chuka Igamba Ngo’mbe MP, Muthomi Njuki, was to footmark Wetangula while Kiuna, a former district commissioner during Kanu days was to put a black eye on Khalwale as David Gikaria checkmated battle-hardened Orengo who already had put his eyeglasses away for the fight that he was smelling.
Like in the movies, the Jubilee combatants swept into the gallery and hell broke loose as karate kicks and blows flew. Kiuna was about throw Khalwale to the parliamentary floor but lady luck saved the agile Kakamega senator. Kiuna was to be helped by James Gakuya, the Embakasi North MP. Ng’ang’a who was to face Ong’era is said to have chickened on seeing the senator’s body mass and she decided to play supporting cast to Ngunjiri against Muthama.
But it was Ngunjiri who effectively performed the duties assigned. He went for Muthama’s throat and Muthama taken without notice went unconscious for a moment. It is then that Nga’ng’a, abusing Muthama as a man with questionable family values, hit him in his private parts as Ngunjiri pulled his trousers with an aim of exposing Muthama’s manhood in public. Thanks to the hours he spends in the gym, the streetwise senator was soon on his feet swinging left-rights like he was once Mike Tyson’s sparring partner one which floored an attacker.
At one time Ng’ang’a’s hand went through the hole in Muthama’s trouser and she withdrew it immediately. She later during the Jubilee post-mortem on the inaugust brawl told her colleagues that she had feared that Muthama had not worn an underwear and quipped that she thought men of Muthama’s age have discarded tight underwears for loose briefs. Muthama had planned to go on holiday to Sechelles but it seems he will now not enjoy a swim in the sea and a poultice will replace a massage as he recuperates. Incidentally, Muthama’s woes have won himself more admirers who think him courageous and today is second to Raila Odinga in popularity in Cord.