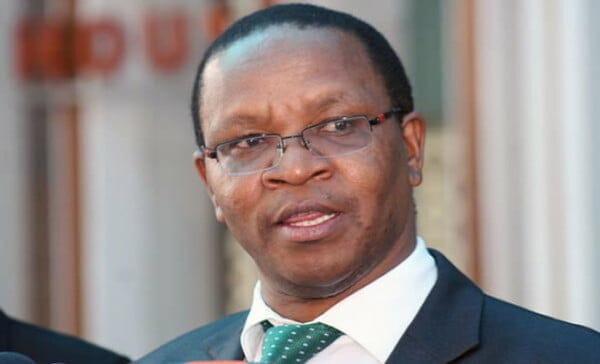 Caption: Interior Principal Secretary Karanja Kibicho, a man operating with the impunity of a Moi-era wanker. Disrespects court orders as if courts are his Kitchen.

Faced with the sad reality that Statehouse has acquired Robert Alai as their prized summer-signing for an undisclosed amount, Kenyans from all walks of life are turning to Cyprian Nyakundi to air their grievances and highlight injustices by corrupt Government officials and corporate bosses who bribe journalists to Polish their images.

The image of Robert Alai sandwiched between President Uhuru Kenyatta and Energy CS Charles Keter has haunted Jubilee 36 Bloggers like Abraham Mutai, Njeri Thorne, Betty Waitherero the sexually-frustrated feminist and wannabe-Somalian, Polycarp Hinga, Eric Kogi, Jane Kogi and others who have never gained the kind of proximity Alai has with President Uhuru Kenyatta. Many almost committed suicide after hearing that Uhuru telephones Alai directly. It seems Uhuru has changed tact and is moving away from bloggers who have made it a habit of insulting our intelligence all the while exploiting Uhuru for personal gain without adding any value like Machel Waikenda.

But however the happenings in the last one week gave currency to our previous articles indicating that Alai, Ory Okolloh and others are Statehouse operatives. 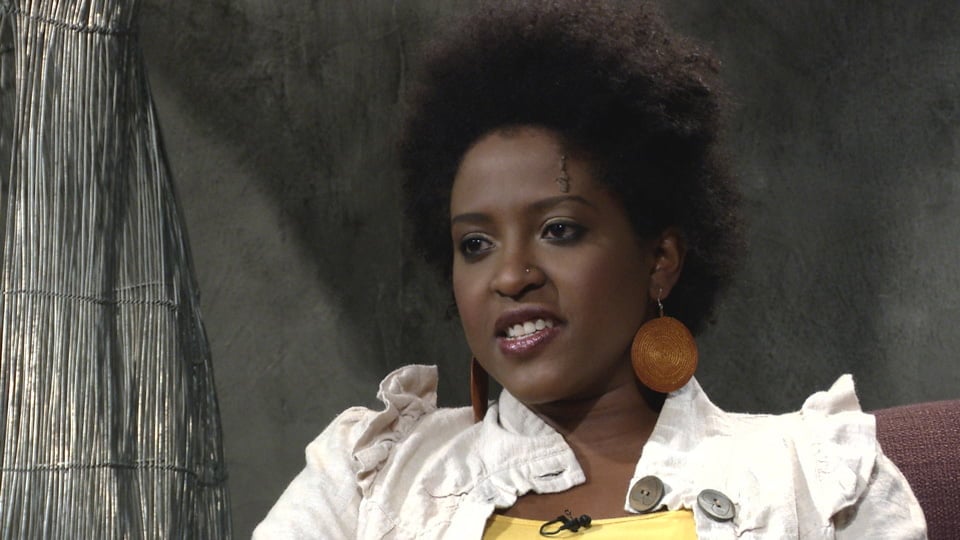 Caption: Double-Agent Ory Okolloh that this Site has exposed in the recent past

One such Government official is Interior Principal Secretary Karanja Kibicho, a man operating with the impunity of a Moi-era wanker. We want to ask President Uhuru Kenyatta to tell us who Karanja Kibicho thinks he is, because this bastard is operating as if he is a shareholder of Kenya. He is contravening court orders, issuing death-threats and purporting to have Uhuru’s blessings in his heinous activities.

Just recently, Meru High Court judge Francis Gikonyo ordered that police in Tharaka Nithi provide protection to lawyer Ashford Riungu, following death-threats he received from Karanja Kibicho. Dr Kibicho had raided a Chuka factory and destroyed liquor despite a court order barring them from doing so during the height of Uhuru’s misguided crackdown on cheap liquor which many suspect was instigated by East African Breweries Limited in a bid to stifle competition.

Mr Riungu, representing Hakim Commercial Agencies, had told the court he had been receiving death threats and he feared that he could be killed by Karanja Kibicho and criminal elements within and inside the Meru County Police Division.

Before the dust had settled on that story, Karanja Kibicho who says he works under the sole discretion of President Uhuru Kenyatta, is in the news again, this time contravening a court-order barring the transfer of 4 officers from the Sagana Police Station.

In documents sent to us, Karanja Kibicho met 4 offices along the Makutano-Sagana highway, where he harassed them, wrote down their force-numbers and ordered their immediate transfers contrary to the Constitution. Ordinarily we don’t like helping police officers because the same scumbags will be sent to arrest bloggers, but on this case, we have a mutual interest in exposing this clown called Karanja Kibicho who works with Joseph Nkaissery, a man that has been linked with Chinese fugitive Wenjie Li.

The 4 policemen filed a case at the Labour Division of the Milimani High Court, who ordered that their transfer be revoked and status-quo maintained pending the hearing and determination of their case.

A second order was even issued on 12th of July 2016 which the National Police Service still doesn’t recognise, as the impression they want to give the judiciary is that they are above the law and can flagrantly be in contempt of court-orders without being taken anywhere.

Hereby attached is the court-order/s that Karanja Kibicho is in contempt of and he should be arrested and charged like other Kenyans since he is just a mere appointee, not even a constitutional office-holder. 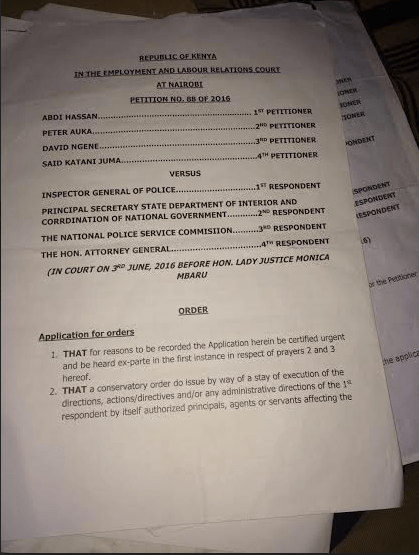 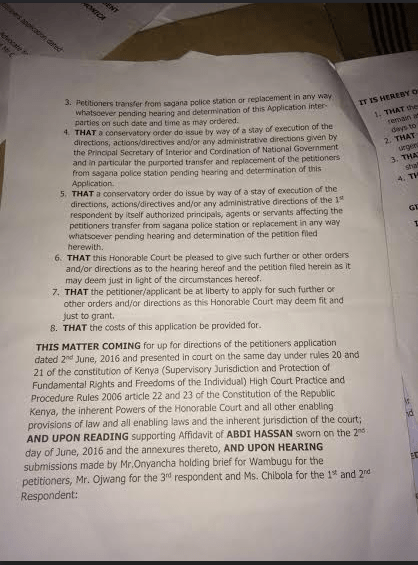 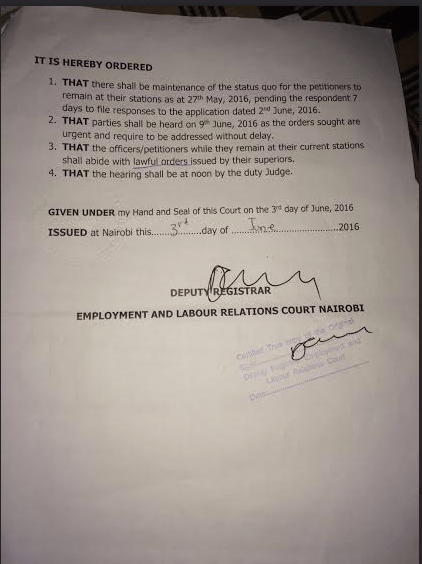 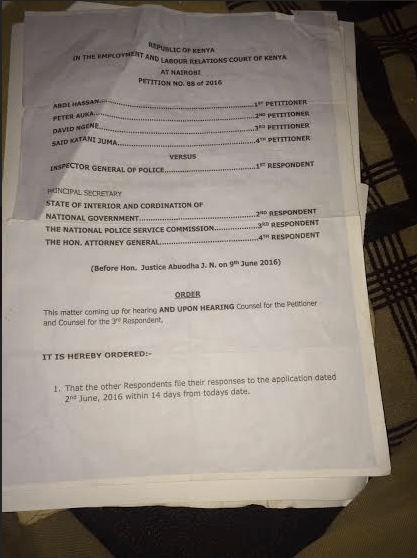 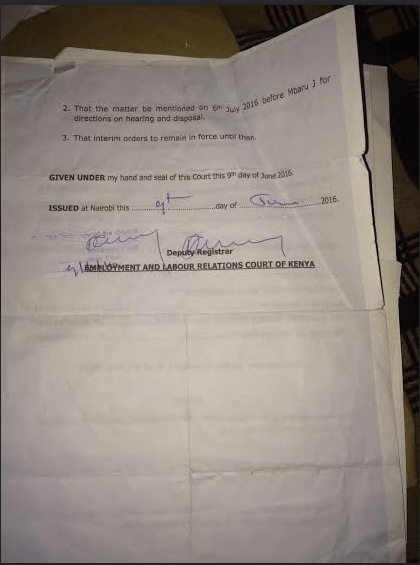 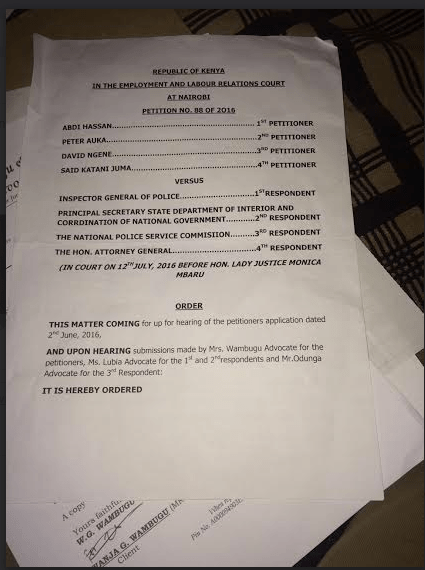 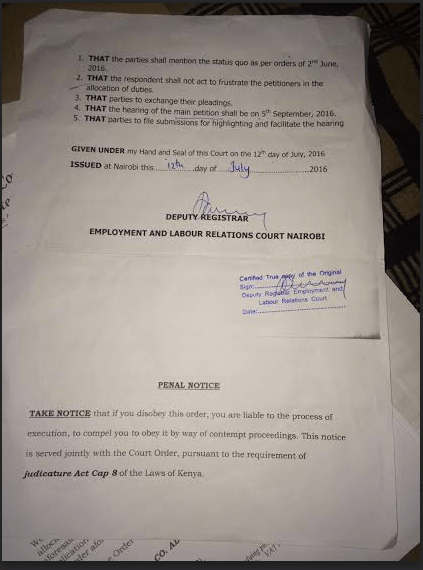 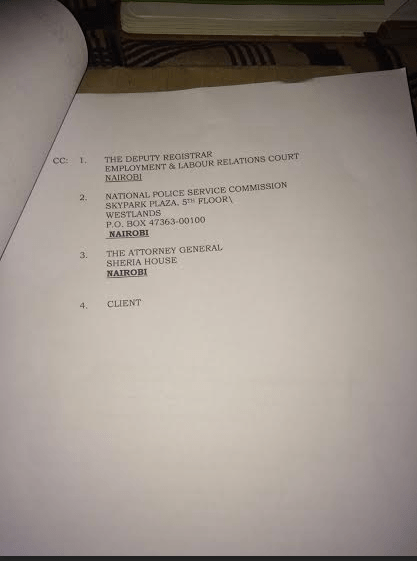 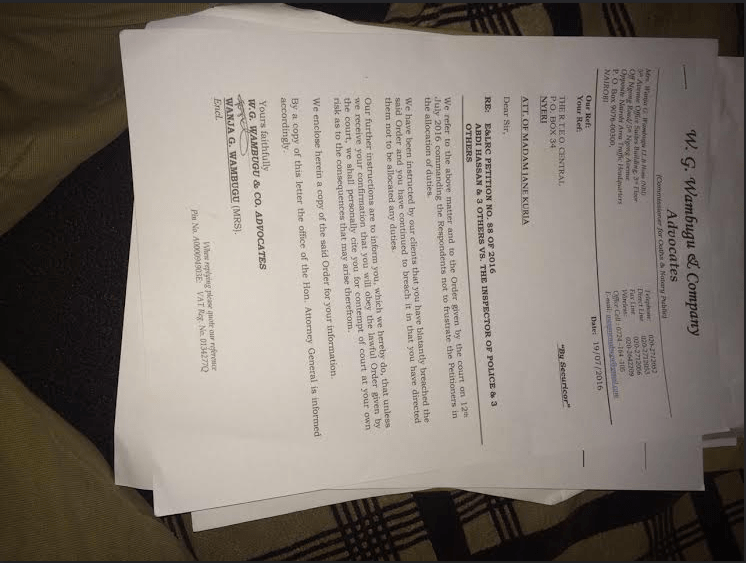