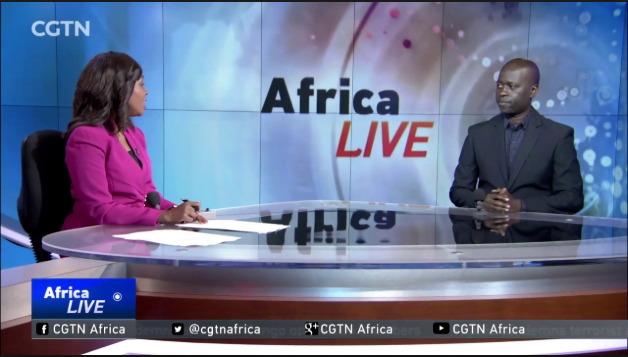 To Interior minister, Fred Matiangi has fired a warning to those foreigners working in \kenya illegally? Well, I think he should start the cleaning the Chinese giant, CGTN. Here racism and sexual harassment for junior employees, especially Kenyans, is a common thing. kihalangwa( the head of immigration)should also clean up his office where corruption is the order of the day.

Workers at CGTN are glad that the current Bureau chief , one Mr Pang is leaving. But they do not know how the mr wang who will take his place will treat them. Under Mr Pang, at CGTN, the order is clear. Chinese are on top, followed by  whites ( mostly white south Africans), foreign blacks, and then kenyans. The same is reflected in pay. Kenyans are paid peanuts, while foreigners are earning a fortune doing the same job with the same or less qualification as compared to kenyans. There is this guy who was a producer for one of the shows called Mathew(Mart) While drunk, he retorted that his colleague’s pay is just enough for his rent. Recently, before Newton Ndebu left for BBC, his fellow white South  African Line Producer s  called Nelis shouted   “ Newton is my boss yet he earns peanuts’. Newton was the deputy newsroom director…

The same applies in hiring. foreingers  are the ones being hired to take up jobs that could be done well by Kenyans. they earn upto  and over 600,000 shuillings plus other allowances while their  Kenyan colleagues aern less that 100,000. But here, they insist on hiring foreigners, at the expense of locals. The same is reflected in the newsroom. Most of the scriptwriters earn less than 100,000bob. There are two writers who are earning 20,000 bob simply because they were hired after internship. This, while two of the writers who are foreigners are taking home over 400,000. There is one girl who is a foreigner, earning a lot but was taught the art of work by the Kenyans she found there and still she cannot handle a script.

Newton Ndebu, who is a former deputy newsroom director, quit to join BBC. While this position was reserved for a Kenyan, the management decided to hand it to the South African, who love rubbing his sexual orientation to everyone.

These |south  Africans holding senior positions ensure that they harass black employees just to prove that they call the shots.

The studio technical operations fall under a woman by tye name Hu Yue. She hates local workwers, to the extend of using them to run her personal errands that include bribing for work permits and driving licences, taking the car to the garrage for service.. one of the people under her, who has so far resigned used to be forced to do what even a woman of no class could. From taking her car to a carwash, to paying electricity bills. She also belives ih things working in her favour. She never listens to anyone,  and threatens employees with the sack everytome they complain over her evil ways.  She could be involved in illicit trade, or is operatuing on tourist visa. There is a time she forced one of the people undre her to bribe airport officials so that she could bring in more than 1,000 golf sticks that she had brought with her froma trip to  South Africa.

When it comes to transport, Kenyan employees are usually left to fend for themselves, as the few available vehicles are always full, a good example is the vehicle that operates Thika road, sometimes upto 12 people are squeezed into the vehicle whose capacity is 7 passengers. All, this, while the \Chinese workers are given special previledges. They are taken whenever they want,. Some even use the assigned vehicles to go for tennis and swimming sessions and golf at sigona golf club.  And the company contrhacted to provide transport treats its Kenyan workers like trash.

Mid last year, a Chinese chef in the restaurant was captured by CCTV cameras groping employees. The man who many refer to as Njoro, was promptly deported. It seems like the whole thing was meant to  save his ass. The girls, most of who hail in KIbera, were forced not to report on the incident. Guess what? Njoro is back, arrogant and maybe still going on with the dirty acts. Recently, workers complained over cold food he had served. He arrogantly told them to eat, because it is free. However, when a white anchor by the name Karen Roberts showed up, Njoro humbled, and offered to warm her food!! at one time the chef was arrested for assault by kilimani police after he hit and injured one of the kitchen staff, but money exchanged hand and the guy was released.

Then there is this white South African guy called Andrew Duffy. He is in charged of planning. This is something that a Kenyan can easily hadle. The guty earns over one million bob. And his sexual appetite is huge. While the company policy prohibits workers who are married from working tiogerther in the same office,  this white guy seems to be above that. He brought his wife,. Vauldi Carelse, to wiork under him. He also loves using his position to force the women who work under him to sleep with him for favours. One such is Soni Methu, who is shamelessly sleeping with Duffy, yet she knows that he is married. at one time a congolese employee accusd him of sexual harrasment but the hr which consists of paper pushers who dont have any idea how a hr office works quickly swept the issue under the carpet with threats of sacking the lady

The sex drive is the reason why CGTN has only one male reporter, Robert nagila. The rest are women only.

We also susopect that nmost of the Chinese heading the various departments are spyies. Most of them come, sit doing nothing throughout the day, as they rtakle notes. It is even more sicjkening to note that CGTN management has stopped taking in Kenyan interns. Insterad, they bring in Chinese.

Still on the pay differences, worjkers here suspect that the amount opf money being paid to local worklers is not what  reflects on Beijing’s payroll.

To cover their asses, the management, under Pang, engaged a company called Bright Vision Media, which processes workers salaries and hiring. The woman in charge of huyman resopurces, Njoki Mugambi, seems to be part of them. She does what she is told. She never pushes for the rights of workers. Like this Nigerian Digital journalist called Fedilis Mbah. He was the deputy directior of the department. Howver, he was fired just because he tried to raise concerns over his colleagu’s academic and work experience. It is said that a lady called Yvone, had claimed in her CV that he had worked for BBC in London, where Mbah had worked. When Mbah denied her, she went reporting that he was harassing her sexually. The head of that department, Lucia, backed the lady, just because Mbah, had forced her to hire black Kenyans. |Actually the department is still understaffed. Njoki never wanted to know what was behind the story.

Then the Chinese have this no sense thing called monthly bonuses. Although the bonuses are meant to be based on worker input and output, foreigners earn more than |kenyans, even whebn it is obvious that kenyans work harder than them.

then comes the bonus which  is pegged on psychofancy. Only a few workers, namele Iola, and Florence Wambui, george michuki, earn this. When on Kenyan worker complained about this, she retorted ‘We have the Kenyan government in our pockets’..

In this company, Mr Pang has ensured that Kenyans live in perpetual poverty, because, to him, Kenyans working with CGTN are being done for a favour. When Celestine Karoney,  the sports, reporter got an offer from BBC, she was actually willing to remain at CGTN. Wheh she asked Pang if he is willing to counter the offer, he shouted ‘But we are already paying you a lot of money’… Now that is the attitude.

\When it comes to per diems,  reporters and crew members have given up. Whenever they travel in and outside Kenya to cover stories, they are given money to cover their costs. However, they are required to provide receipts and all documents to show how the cash was spent. And the balance refunded. It beats logic. Ma\ny have iopted to only work on assigned stories, for they don’t like being harassed by a lady called Agnes Mina, whose tongue they fear.

We suspect that the Chinese here are using this funds to bribe immigration officials over their statuses. of late they have been travelling out of the country and back with touristd visas while they work on ways to bribe the immigration officials, it was complaine to the labour and immigration offices about the rot at CGTN but those officials said that orders were coming from a higher office hence the phrase by the chinese'”we have the government in our pocket”  One thing that amazes everyone is the head of the newsroom. Sheng Jieng was supposed to be replaced by Lulu Wang, after her time expired. Well, she is still here, under unknown circumstances. Shen and Hu are partners,  living together and working in the same company!!

So Matiangi better work on an audit report, together with the Chinese embassy, to ensure that our points are worked on.