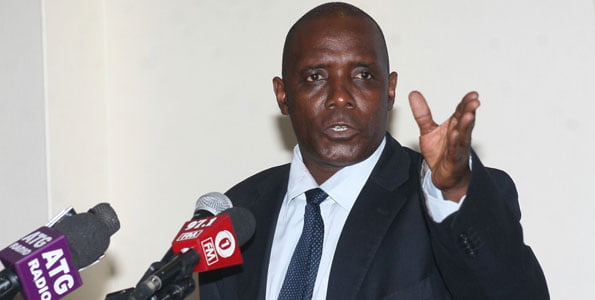 CAPTION: Muhammad Swazuri. Like his counterpart at EACC Philip Kinisu, Swazuri is the most corrupt fucker in Kenya. A firing squad should publicly execute These two Constitutional office-holders or lynched by ordinary Kenyans.

Muhammad Swazuri, the chairman of the National Land Commission (NLC) is apparently the most corrupt head of a constitutional commission, followed closely by Philip Kinisu whom we have recently discovered has been doing deals with the scandal-riddled National Youth Service (NYS).

Swazuri’s first ever national limelight expose was during the recent USIU land scandal, where together with a network of operatives and middlemen, he produced a fake title-deed for land that former President Daniel arap Moi had already sold to the United State International University.

Swazuri runs a scheme of producing fake title deeds for unclaimed land and using his network of thugs, sells it to unsuspecting victims who have been triggered into mass panic-buying of land by fake reports written by lead real-estate companies like Hass Consult and Knight Frank. We recently called on the Federal Bureau of Investigation (FBI) to investigate both Hass and Knight, for laundering proceeds of crime and especially money linked to Somali pirates and Al-Qaeda linked-terrorists, whose dirty money has seen the price of real-estate and rents rise abnormally, going against all market dynamics and economic fundamentals.

Muhammad Swazuri is the godfather of a cartel working in the lands ministry, whose work is to moonlight, scouring through records and earmarking land to steal. His meddling has been felt in the coast province where he has refused to renew many land leases by ranchers and in many instances demanded crazy bribes in-order to do his job.

Being a constitutional office-holder, Swazuri works with the confidence that President Uhuru Kenyatta is a sitting duck who cannot take him anywhere. His defense line solely lies in bribing journalists, select Members of Parliament (MPigs) and other organs of Government.

And true to it, President Uhuru Kenyatta is a sitting duck whose office has been reduced to arresting bloggers and not people like Swazuri who compromise investment and have made Kenya lose its global appeal and competitiveness as an ideal location for investment. Land scandals have deterred many foreign investors to shy away from Kenya, and relocate to neighbouring Ethiopia.

And since President Uhuru Kenyatta is a sitting duck who only quacks and flexes muscles when his police officers are arresting bloggers who have committed no crime, shall we as Kenyans continue allowing Muhammad Swazuri compromise our country’s long-term interests?

Swazuri has been strangely very keen on the Taj Mall case, where he has been shifting goal-posts at every turn, probably seeking different ways of extorting the owners of the building. 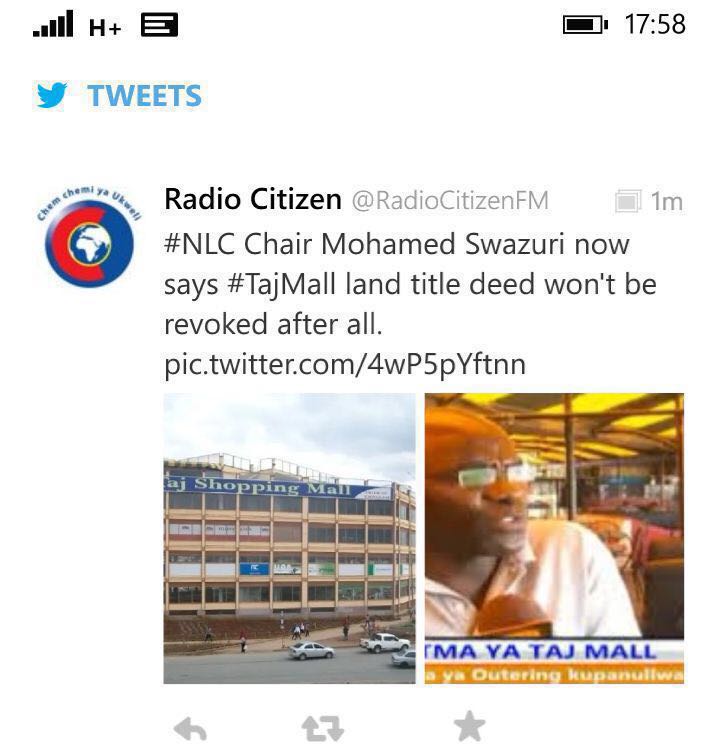 CAPTION: News-piece shows Swazuri’s suspicious obsession with Taj Mall and the land in the Embakasi area.

It has also emerged that Swazuri who has married four (4) different wives has developed a very strange interest in the Mombasa Road/Embakasi area as he has dispatched middlemen to scout actively for land.

The two known agents of Muhammad Swazuri scouting for land on Mombasa Road are Simon Nyamanya Ondiba and Mary Namanya who together with the Officer Commanding Police Division of Embakasi a Mr. Onyonyi, we’re pursuing a parcel of land located on Mombasa Road, LR 209/11293/1/2 which has been owned by one individual for over 25 years. 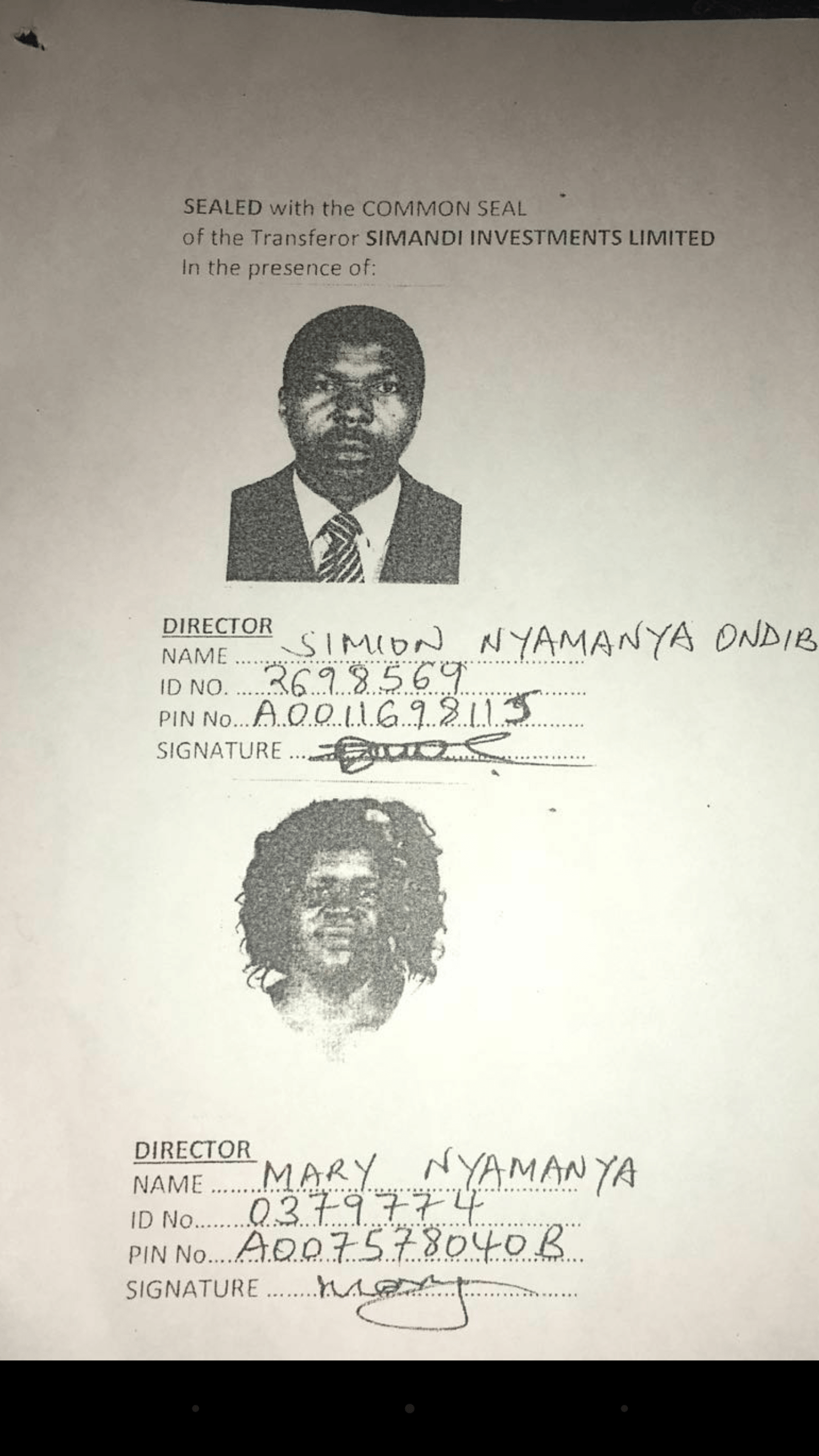 CAPTION: Records at the lands ministry reveal the identities of agents of Muhammad Swazuri who are said to be husband and wife Simon Namanya Ondiba and Mary Namanya. The two reside in Kahawa West.
Over the last few months, Swazuri has dispatched his two proxies to pursue the plot of land, and written a letter to the OCPD of Embakasi to make sure that they are accorded security in their bid to grab the parcel of land along Mombasa Road, next to Power Technics. 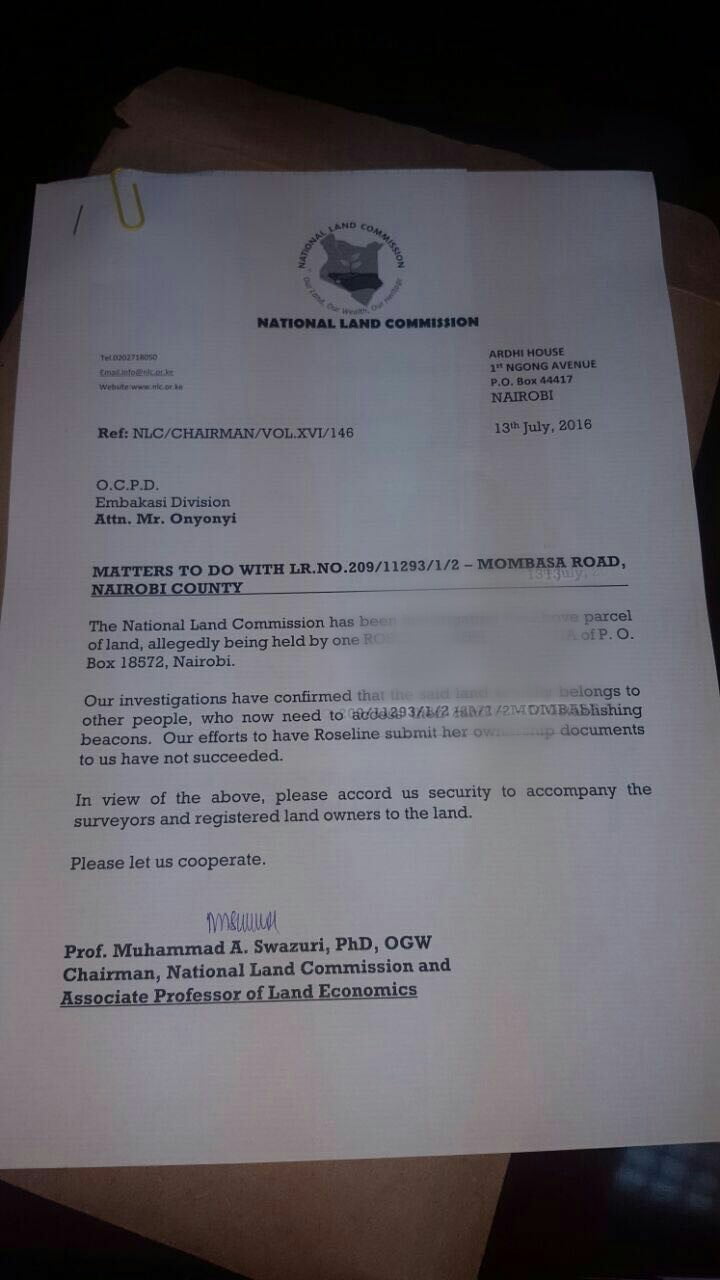 CAPTION: Letter from Muhammad Swazuri to Embakasi OCPD, asking for his assistance to enable grabbers named above, move into a property that he has been eyeing for many years since getting into office.

Indeed, there was a suspicious chemistry between Muhammad Swazuri and the OCPD of Embakasi Onyonyi, prompting an internal investigation by Vigilance House. The matter saw Onyonyi transferred from Embakasi to Marakwet recently, further confirming that Swazuri has been working directly with officers to intimidate land owners and grab their properties with the impunity of a Moi-era thief.

It is our humble proposal that any future engagement between the National Land Commission and the National Police Service must be through the office of Inspector General Julius Boinnet, and not directly to OCPD’s because Boinnet’s juniors may be abusing the new constitution to engage with thieves like Swazuri for personal gain.

It has also emerged that Muhammad Swazuri has been working alone, and doesn’t share some of the details of his unscrupulous activities with fellow commissioners, who are always in the dark and come to learn of controversies via the media.

The mainstream media journalists, who we have widely covered as being scumbags that compromise national interests for the sake of a few coins in their quest to portray thieves like Swazuri as saints, together with their editors are said to be on the payroll of Swazuri to portray him as acting on behalf of the Constitution, while in real sense he is looking for land to distribute to his 4 wives and many children.

First and foremost, why should innocent Kenyans suffer because of someone’s stupidity of marrying 4 wives? Why should people be victimised and their land grabbed so that Swazuri can fend for the mouths of his many wives and children? 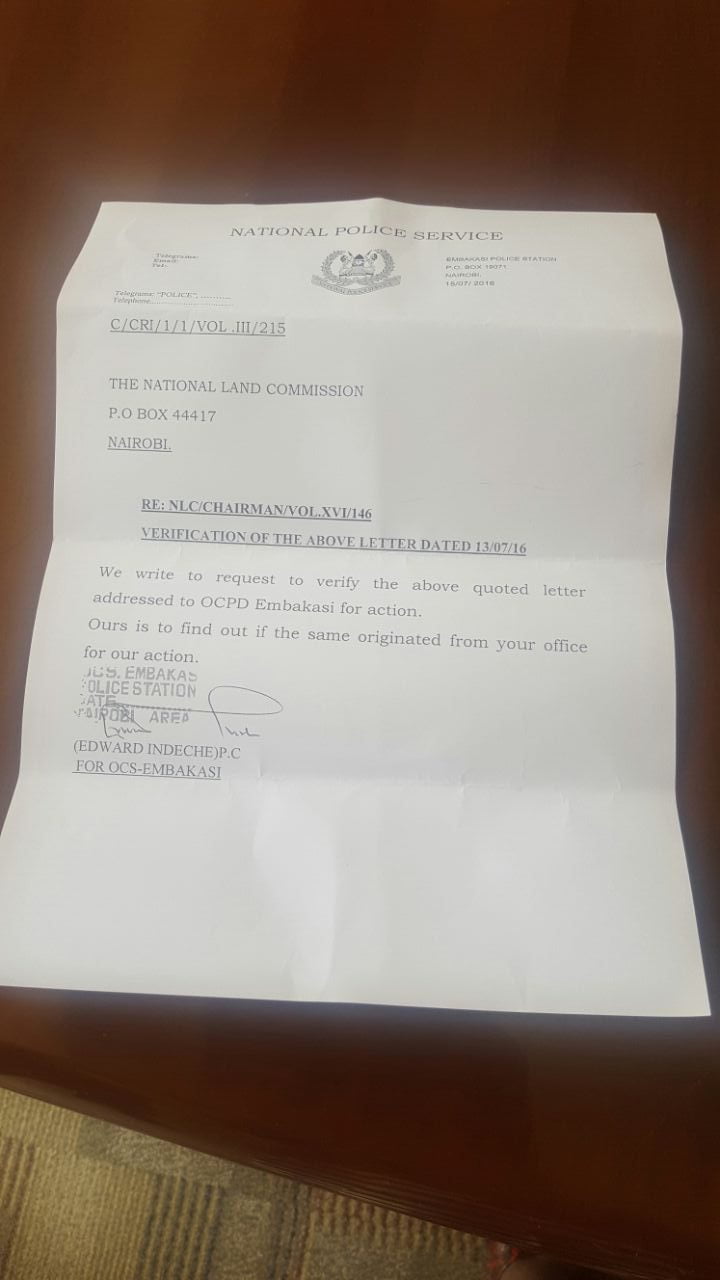 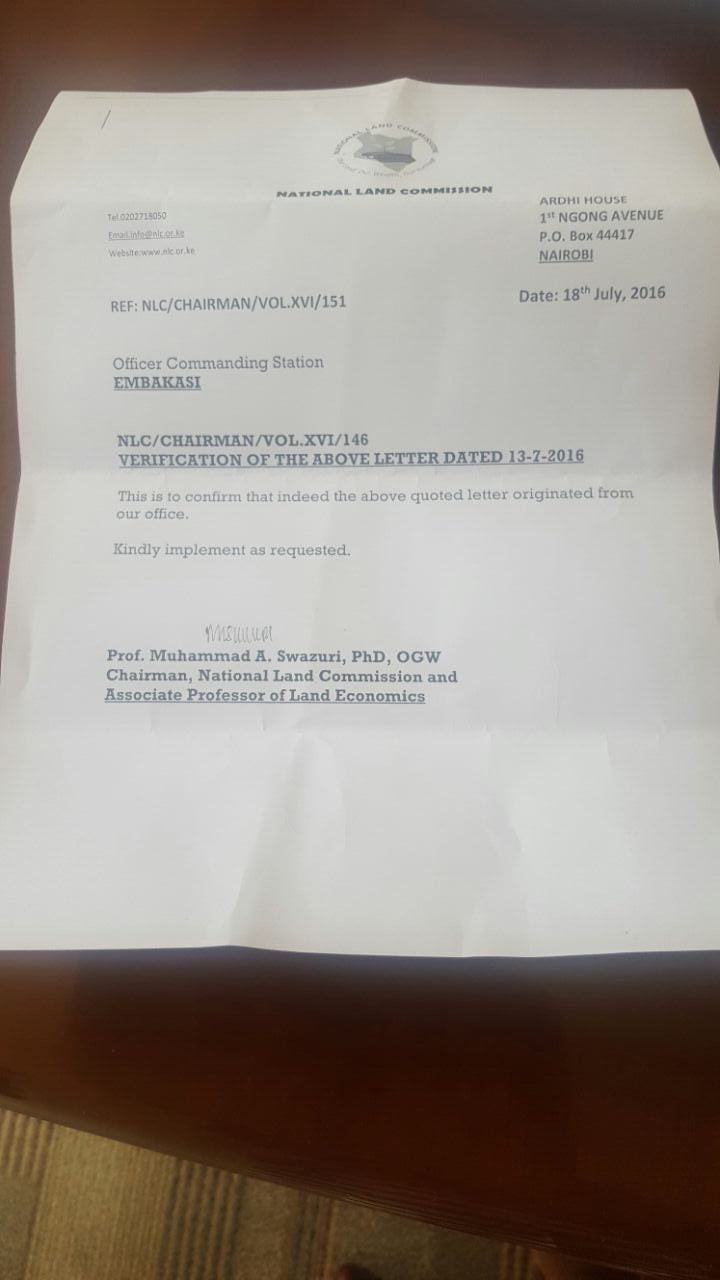 CAPTION: Letters showing suspicious communication between Muhammad Swazuri and the Embakasi Police Division. This should end immediately. All letters must henceforth be routed via the office of the Inspector General who will then issue commands to his juniors.
Would you like to get published on this Popular Blog? You can now email Cyprian Nyakundi any breaking news, Exposes, story ideas, human interest articles or interesting videos on: [email protected] Videos and pictures can be sent to +254 710 280 973 on WhatsApp, Signal and Telegram.