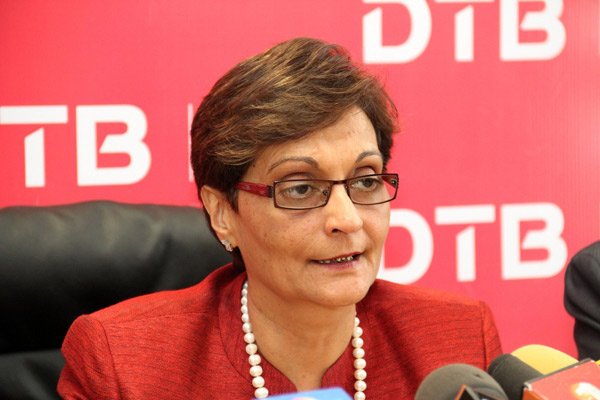 Diamond Trust Bank Group CEO Mrs. Nasim Devji and Diamond Trust Bank Uganda MD Mr. Varghese Thambi are among the staff that will testify in a case in which Ham Enterprises is suing the bank for making UGX120 billion (Sh3.5 billion) withdrawals from their bank accounts without consent.

In the case the was filed at the Commercial Division of the High Court, Ham Enterprises (U) Ltd accuses DTB Bank Uganda of fraudulently withdrawing UGX 29,035,682,682 billion (Sh857 million) account and USD 22,938,528.29 Million (Sh2.4 billion) from their shillings and dollar accounts as per the account statements for a 10-year banking relationship that they had operated those accounts.

There are other such cases in court in Uganda and even in Kenya.

Another customer named Yiga Musa (suit no.254/2017) filed a suit against the bank in 2016 after the bank took advantage of him not understanding and reading the English language. The bank made him sign many documents, including mortgages deeds with an intention of creating an illegal mortgage and making him a debtor and defrauded him of UGX 3, 500,000, 000 (Sh103 million)

Gen Charles Angina also filed a case (suit no. 76/2018) in court after the bank took advantage of his busy schedule and committed a series of frauds on his accounts which included transferring his properties to third parties on allegations that he had defaulted and he lost UGX 1,800,000,000 (Sh53 million)

“Let courts of law first determine the case we filed against the Bank for recovery of our money. Then we shall proceed to file cases against individuals, holding them accountable for the fraudulent and money laundering acts that caused unlawful debits of money from our accounts, good enough; Ham Enterprises (U) Ltd being a high profile client only dealt with top management with both DTB Uganda / DTB Kenya.” – Ham Enterprises (U) Ltd C.E.O Mr. Hamis Kiggundu

In Kenya, cnyakundi.com has been the lone voice exposing the cases but the industry regulator Central Bank of Kenya (CBK) has been silent, no acting taken.

A case in point is that which happened in 2018, where a South Korean investor sued DTB (Kenya) for liquidating and withdrawing KSh150 million in two fixed deposit accounts without her approval using forged documents.

The investor, Sun Pil Lim, who is the wife of the President of Safari Park Hotel and Casino, Young K Roh, filed two cases against Diamond Trust Bank Kenya Limited, demanding her money back.

In the first case, Sun who is the chairperson of Daehan Pharmaceutical Limited, lodged a case at the High Court’s Commercial and Admiralty Division on September 14, seeking to recover the KSh100 million it had put in a fixed deposit.

His company was supposed to import drugs and other medical devices from Korea and sell them in the country.

After incorporation, the company opened an account with DTB, Thika Road Mall branch, on May 19, 2015 and wired KSh100 million on October 24, 2015, with instructions that the money be put in a fixed deposit account after being promised an interest of 16 per cent.

On October 28, 2015, the bank issued three certificates of deposits for the cash, which had been deposited in tranches of KSh40 million and two others of KSh30 million each.

His money vanished from the account through illegal withdrawal.

Despite this and many more other cases, nothing has changed, clients continue to lose their money at DTB and Equity Banks through illegal withdrawals disguised as system glitches.

The crooked Mrs. Nasim will have to stand in a Ugandan court dock to answer to charges of fraud that might see the bank collapse.

Mrs. Nasim Devji and Mr.Thambi Varghese are directly answerable to any money laundering and Fraud charges filed, or other related charges that may result from the bank’s illegalities given the fact that Ham Enterprises directly dealt with these two topmost officials in the bank.