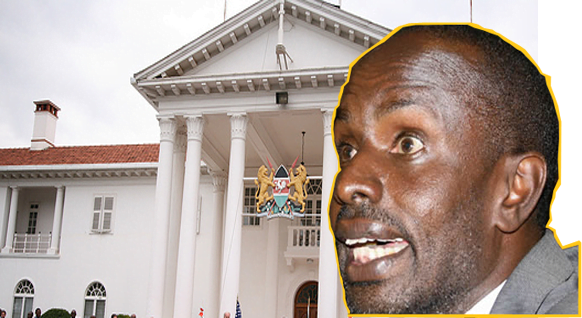 The press briefing conducted by the Kenya national union of teachers at their headquarters was a clear demonstration that this year’s strike has more political ingredients than it has other factors.
Knut officials are using every available weapon within their reach in their quest to force the government to comply with the court’s ruling of 50-60 pc salary increament to teachers.
As this is happening, Jubilee fearing Cord will hijack the strike plans to compromise top teachers union officials to silence matters. A talk in the country’s centre of power has it that the officials are to be lured with ambassadorial appointments to divide the teachers unions.
The language which Knut secretary general Wilson Sossion and chairman Mudzo Nzili used during their press briefing after their lengthy meeting with national executive committee was deliberately shrewd and tailored to armtwist Uhuru Kenyatta politically.
In their wisdom, they tactfully isolated William Ruto from blame and aimed their political arsenal at the president and his Education minister Jacob Kaimenyi.
In the same language, teachers tactfully painted the deputy president with different clear colours from the one they painted the president in.
They may not have mentioned the president’s name but the way the talked about CS Kaimenyi and “the government,” their voice had a telling tinge on these two “unwanted people” whom they repeatedly described as enemies of teachers, parents and the education sector in Kenya.
However, things were different when they mentioned DP Ruto. The two top most Knut leaders used every good adjective to describe DP Ruto. They showered him with praises and this was deliberate.
The Knut mandarins led by chairman and secretary general repeatedly quoted DP Ruto as having said that teachers must be paid as per the court’s ruling. “Our beloved deputy president said clearly that teachers must be paid. Before we even started congratulating him, the enemy of teachers and the enemy of the parents of Kenya one Jacob Kaimenyi said that the government does not have money to pay teachers,” said Nzili as members of NEC echoed back “ashindwe!”
“Aliongea kwa nguvu ya nani?” one NEC member asked as others echo “he should tell us”.
Knut is now tactfully using the tactic of the hunting lion. The lion upon sighting a herd of wildebeests or other animal that graze in herds, tactfully scatters the herd, isolates the targetted one for their easy prey.
This is what the Knut officials were doing when they tactfully isolated Ruto and praised him as the only one friendly government official to teachers in the country.
Nzili quoted Ruto as having said that teachers must be paid. “We identify ourselves with these sentiments fully” he said. Sossion’s speech dwelt largely on the corruption in the government and quoted several research which has repeatedly painted Kenya government as the hotbed of corruption and a country where institutionalised corruption where Sh600 billion is lost annually through the vice.
Sources within the Knut executive meeting said that the union leaders unanimously discussed and came to consensus that should shove come to push, teachers would unleash their numbers against the president and Jubilee in 2017 general elections.
Knut members across the country would each be required to convince at least 20 voters to vote against the president and his party.